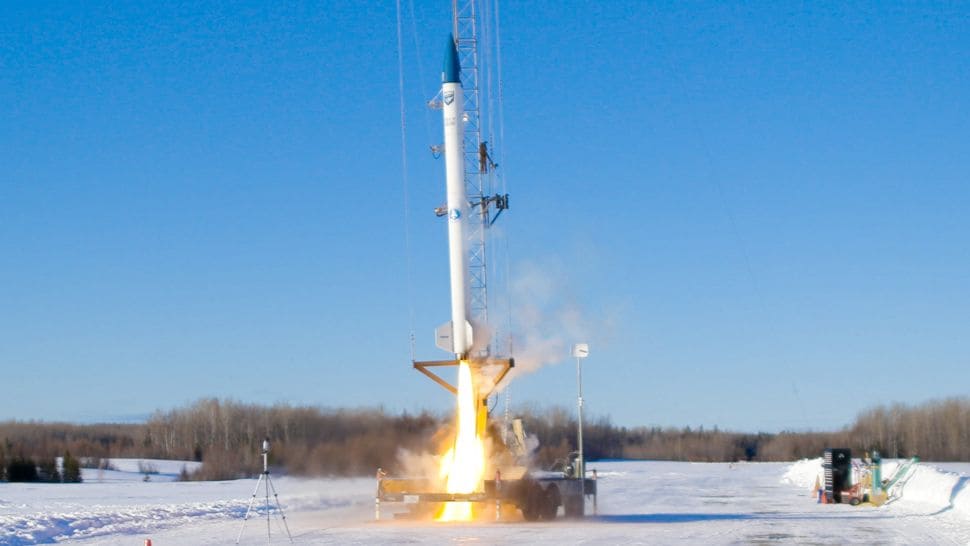 A Maine company that’s developing a rocket to propel small satellites into space passed its first major test on Sunday.

Brunswick-based bluShift Aerospace launched a 20-foot (6-metre) prototype rocket, hitting an altitude of a little more than 4,000 feet (1,219 metres) in a first run designed to test the rocket’s propulsion and control systems.

It carried a science project by Falmouth High School students that will measure flight metrics such as barometric pressure, a special alloy that’s being tested by a New Hampshire company — and a Dutch dessert called stroopwafel, in an homage to its Amsterdam-based parent company. Organisers of the launch said the items were included to demonstrate the inclusion of a small payload.

The company, which launched from the northern Maine town of Limestone, the site of the former Loring Air Force Base, is one of dozens racing to find affordable ways to launch so-called nano satellites. Some of them, called Cube-Sats, can be as small as 10 centimetres by 10 centimetres.

“There’s a lot of companies out there that are like freight trains to space,” Deri said. “We are going to be the Uber to space, where we carry one, two or three payloads profitably.”

Another aspect that makes bluShift’s rocket different is its hybrid propulsion system.

It relies on a solid fuel and a liquid oxidizer passing either through or around the solid fuel; the result is a simpler, more affordable system than a liquid fuel-only rocket, said spokesperson Seth Lockman. The fuel is a proprietary biofuel blend sourced from farms, Deri said.

“It’s a very nontoxic fuel, I like to say that I could give it to either one of my little daughters. Nothing bad would happen to them, I swear,” he said. “So it’s very much nontoxic. It’s carbon neutral.”

The goal is to create a small rocket that could launch a 30-kilogram (66-pound) payload into low-Earth orbit, more than 100 miles (160 kilometers) above Earth’s surface. Lockman said orbit could be possible by 2024.

The company has spent $8,00,000 (roughly Rs. 5.8 crores) on research and development, with some of the money coming from NASA.

Representatives from bluShift said they don’t anticipate being able to launch from Brunswick, where they are headquartered, because of population density in the area.

An attempted test launch in Limestone earlier in January was postponed because of weather. Sunday’s launch was also held back by a couple of false starts, but event organisers described the eventual 3pm (1:30am IST) liftoff as “perfect.”