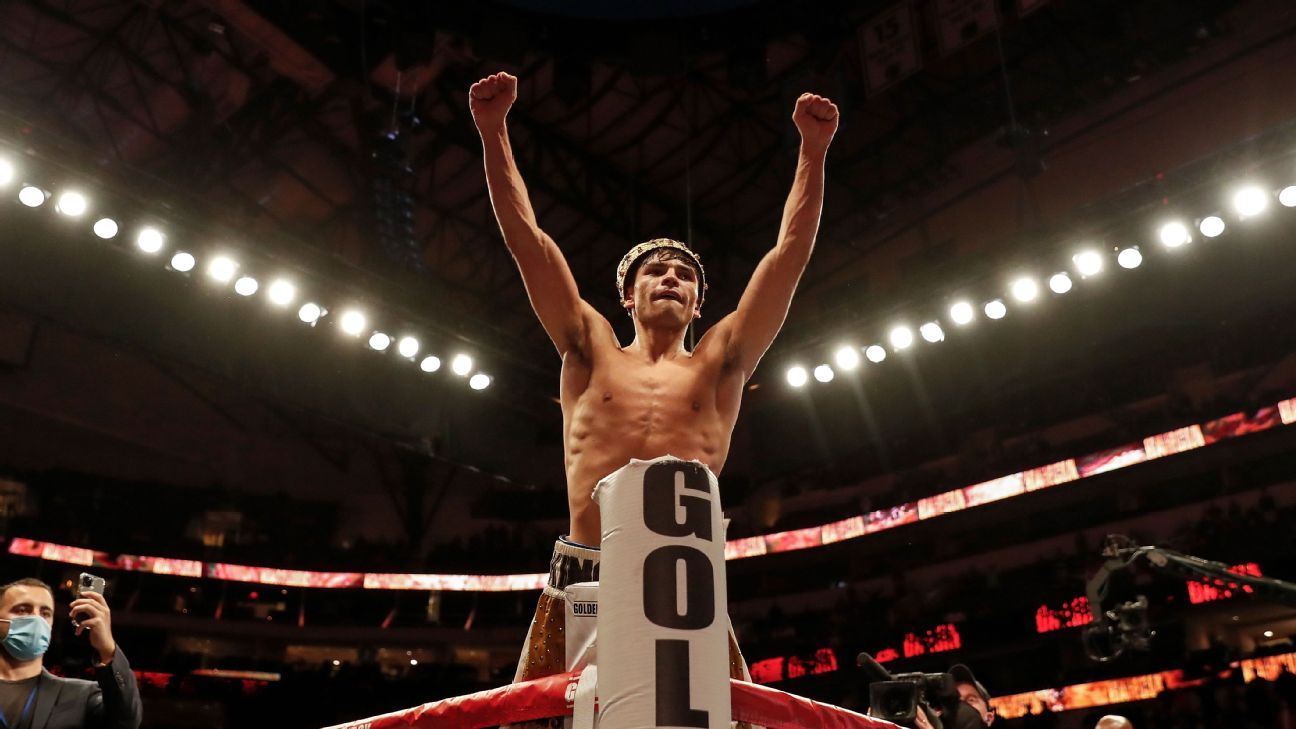 The saga between Ryan Garcia and Manny Pacquiao continues to unfold. Garcia has said he wants the fight — a real fight — against the boxing legend, but now his promoter says it’s no longer in the cards. Garcia may have also lost his bout with Gervonta Davis is the process. Has all of this drama impacted the marketability of Garcia? Is he still on the path to stardom? And if you’re Davis, do you wait for Garcia to get his house in order or move on and fight someone else?

The other showcase fight Pacquiao had been focused on is with Conor McGregor, but after McGregor’s loss at UFC 257, is that fight still attractive for combat sport fans?

While Garcia is getting all the attention, another young exciting fighter in Golden Boy’s stable, Virgil Ortiz Jr., is moving up in competition — in a real fight, against a former champion. Ortiz faces Maurice Hooker in what seems to be a big risk, so what can this bout tell us about the next steps in his career?

Real or not: All the talk about fighting Manny Pacquiao has helped Ryan Garcia’s place in the sport

This has all the earmarks of a fiasco from which a young fighter – especially one as promising as Garcia – should have been spared.

Garcia — as I’ve said recently — is precisely the kind of young star boxing needs. I don’t blame him for wanting to test himself against Pacquiao — two decades older, two divisions bigger – but the kid deserved better from the people around him. Garcia could be special. But it feels like his handlers have left him to learn one of boxing’s truisms the hard way: that a fight with Pacquiao is among the easiest things to talk about, and the hardest to get.

The way I’m hearing it, this whole thing began as a farkakta proposition for Garcia’s titular promoter, Oscar De La Hoya, and Pacquiao to fight at a half billion dollar mansion in Bel Air that’s been on the market longer than its builders imagined. In other words, an exhibition with no live gate. Nevertheless, De La Hoya apparently passed this can’t-miss opportunity on to his company’s most marketable asset, Garcia.

Meanwhile, it took nearly two weeks for anyone to clarify if the Great Proposal was an exhibition — not a great look for a 22-year-old coming off a win that enticed the boxing world — not to mention that little thing called the Internet. Turns out it’s supposed to be a real fight, but the task of clarification was left to Garcia himself on Instagram.

Then ESPN Deportes columnist Salvador Rodriguez spoke with Golden Boy President Eric Gomez, who said “There’s nothing to talk about. That fight isn’t going to happen.”

Huh? And you wonder why Garcia’s had problems with his promoter.

Garcia’s advisor, Guadalupe Valencia, also told Rodriguez that both fighters’ teams would continue to push ahead in hopes of a fight, as per their clients’ wishes. That’s wonderful if it happens. But what if — like most great boxing ideas — it falls apart? Let’s start with the fact that Pacquiao and Garcia are signed with different promotions.

Maybe Valencia can negotiate a compromise. Still, bigger question: where’s the money? Pacquiao needs a lot of it, and doesn’t want to fight in the Unites States due to his delinquent tax liabilities.

Look, fighters talk about fights that never happen all the time. But Garcia is in a unique position, at a unique moment in his career. It wasn’t just the way he got up off the canvas and took out Luke Campbell (something for him to think about in the event he should ever drop his right hand against Pacquiao). The attention he commanded derived from more than that. It was very deliberate sense with which he went about pursuing a fight with Tank Davis.

“Ryan Garcia vs Gervonta Davis is going to be one of the biggest fights you’ve ever seen,” he told me just weeks ago.

I don’t know if it would be quite that. But he had me believing.

What’s more, he succeeded in putting Davis in a position where he had to engage.

Now he’s given Davis — who recently tweeted that he’s moved on — a way out.

So what if Ryan Garcia has lost his shot at Tank Davis for a Manny Pacquiao fight that never happens?

That would be a damn shame.

Real or not: Outside of Canelo Alvarez, Ryan Garcia is the most marketable fighter in boxing

Baby: This is as real as it gets. We’ve known that Garcia has the potential to be a financial superstar that is a once-in-a-decade commodity. However, the ring skills were always a big question mark. Losers aren’t marketable.

But with his TKO win over Luke Campbell in January, Garcia proved he has the goods. And given his recent endorsement deal with Gatorade, he gives boxing a viable mainstream star that has the potential to carry the sport for years to come, even if he wants to do a little MMA at some point.

What’s more impressive is the rumored bout against Manny Pacquiao. Don’t get me wrong — an exhibition between the two would not be good for boxing. But if the two can find the money and agree on a the details, the fact Pacquiao’s camp even considers this a viable move speaks volumes about Garcia’s ability to sell a fight over even the likes of Errol Spence Jr. and Terence “Bud” Crawford, two current welterweight champions who have wanted that Pacquiao payday for years.

If Garcia keeps winning, companies will be looking to get Garcia stock at whatever price they can. There are enough short-term and long-term gains to go around.

Real or not: Manny Pacquiao-Conor McGregor could still happen even after McGregor’s loss

Tessitore: Real, it still could happen. It won’t but there’s always a could. You guys are going to make me invoke the old fight game axiom in answering this question, aren’t you? Here we go, “If it makes dollars, it makes sense.” Problem is, that in this case it would only make “cents,” not “sense.”

Actually we all know Pacquiao-Floyd Mayweather never did quite pass the smell test, or perhaps better suited smelling salts test. But it would’ve filled canyons of cash if made at the right time. It just took Dustin Poirier to finally inform the masses that the fight now lacks just enough credibility. The Proper Twelve founder vs. The Senator would currently ONLY make boatloads, not canyons, of cash. Therefore it’s downgraded to, “won’t happen”, but of course still, “could happen.” Listen there’s always money to be made.

Top Rank Boxing is on ESPN and ESPN+. Subscribe to ESPN+ to get exclusive boxing events, weigh-ins and more.

Poirier’s calf kick softening and subsequent KO of McGregor at UFC 257 even has Pacquiao’s advisors acknowledging it’s a tough sell at this point. Truth is, Dana White and the UFC 2021 road map has long been dependent, and necessarily dotted, with an active PPV hyping McGregor. Now a rehabilitating ‘get well’ opponent is much needed for Connor — and as soon as possible. I’d expect McGregor back in the Octagon in May.

Maybe I should go to Instagram to see which other lucrative exhibition fight Pacquiao can land now. Ryan Garcia wearing 18 ounce gloves, and conditional rules of no head punching? All from a Hollywood tycoon’s backyard? A fundraiser? I forget the IG comment details already. Pacquiao earned the right to do whatever he wants long ago — I’d just love to see him in a competitive actual fight at this point. A young up-and-comer, and established champion. It’s all good.

The only thing we know for sure is that Pacquaio is heading into his final stretch of his six-year term as a senator. In 2022 the Philippine national elections take place and President Rodrigo Duterte’s term limit is up. Now that’s a title far more attractive than the WBA welterweight strap to Manny, who is now considered “champion in recess.” A presidential election seems like the far more likely big fight on his schedule.

Real or not: Gervonta Davis should not wait for Ryan Garcia and face Devin Haney while Teofimo Lopez recovers

Bradley: Real: Wait for what? It is obvious Garcia has changed his tone. “Tank” Davis is 26 years old and he is at the start of his prime years. At this point of his career, Davis, who’s a two-division world titlist should not chase anyone. Garcia has been woofing. He’s calling Gervonta Davis’ name, and “I want you afterwards. I keep my promises,” and all this stuff. And then next thing you know, he’s backpedaling. He’s saying, “Whoa, whoa, whoa, whoa, wait.” Now he’s talking about Pacquiao. Stop. I have a problem with that.

And now Tank is like, “I thought we was going to get down. Come on.” And that’s the fight that everybody wants to see, is him and Garcia. But I don’t see the fight happening anytime soon. So I think Tank should stay active and fight. We’re going to see a guy here in a week or so, Richard Commey, he’s coming back at 135. He’s strong. He’s a former champion at 135 pounds. You also have a guy in Masayoshi Nakatani who looked impressive against Felix Verdejo in an exciting fight — went down several times during the fight and got up, finished strong, and actually knocked Verdejo out.

Beating Haney would be pretty good, too, for Davis’ career. Haney’s not unproven, he’s a champion. There’s so many damn belts out there and it’s messy because Haney has the “real” WBC belt but Teofimo Lopez says he’s undisputed.

But what if Davis stayed out of that mess altogether? A fight with Vasiliy Lomachenko would really draw some eyes. That’s a fight a lot of people would want to see — Lomachenko vs. Tank Davis. If he wants to continue his legacy in a positive way he should fight Lomachenko. That would be a great fight stylistically, and also, they’re around the same size.

If he beats Lomachenko, there’s no way you can doubt him. He’s the real deal.

Real or not: Vergil Ortiz is taking too big a step in facing Maurice Hooker

Ward: Not real. Moving a fighter at the right pace and taking a step-up fight at the right time is a very real thing. It’s an art and there are no guarantees.

Now to the matchup. Hooker has just as much and maybe even more to prove in this fight than Ortiz. He’s been to the mountaintop; he’s tasted the glory of being a world champion. The onus is on him to prove that he still belongs. A 15-month layoff come fight time and constant weight issues will make this task that much harder. Ortiz on the other hand is young and unproven against top opposition, and has only basked in the ideals of the sport. He hasn’t faced real adversity… yet. These are the matchups that can create stars or send a career into the boxing abyss. That being said, I don’t think Ortiz is stepping up too fast.

Numbers don’t lean in Ortiz’s favor; he’s only boxed 45 rounds in his professional career, but sometimes the answer is not in the numbers, but in what you see and what you feel when you watch an athlete compete. I believe he’s ready.