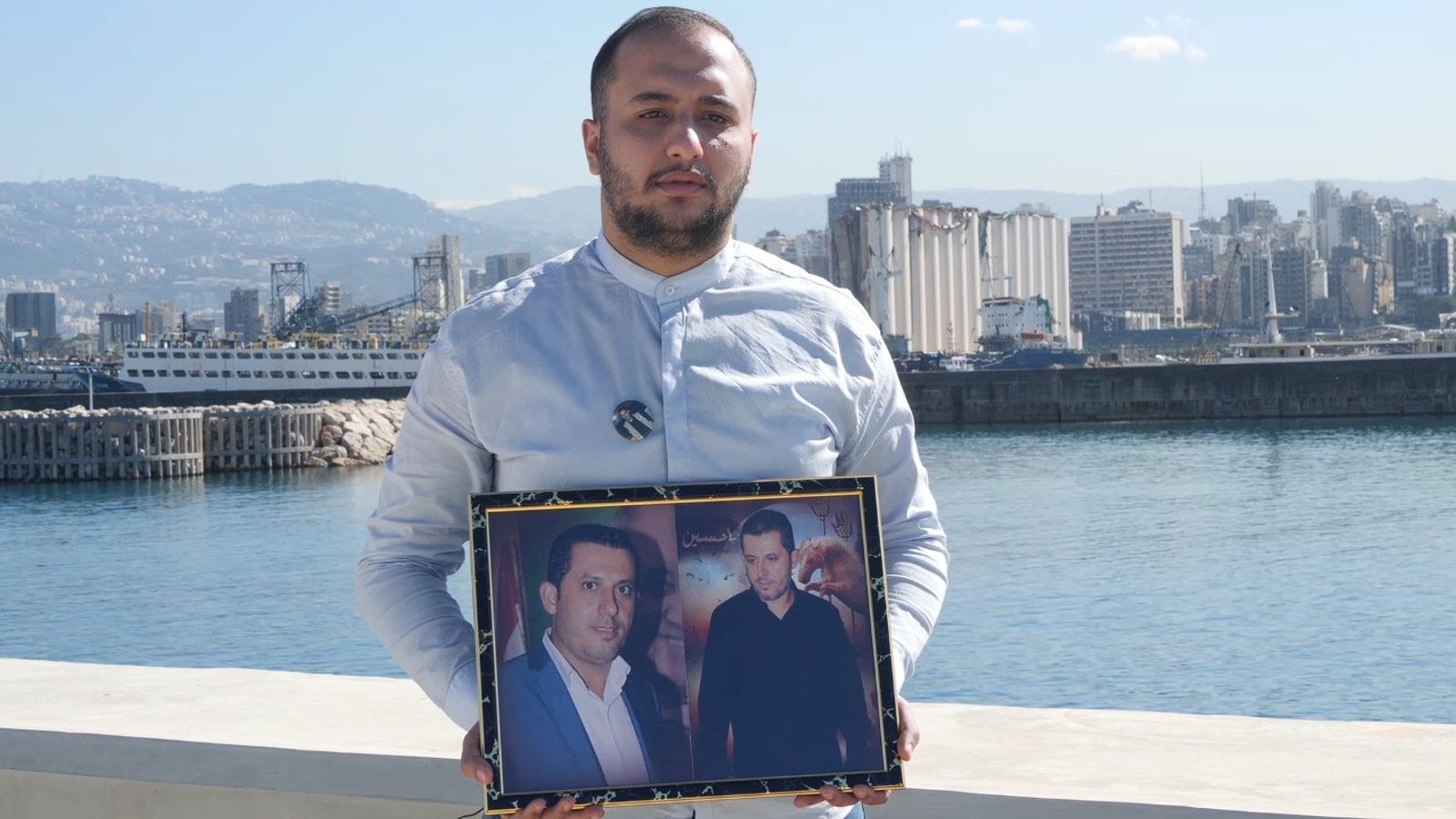 The lawyer representing hundreds of families still grieving after the Beirut explosion has told Sky News that the British authorities may hold the key to providing them with answers and justice.

It is six months since one of the largest ever non-nuclear explosions ripped through the port in the Lebanese capital.

More than 200 people were killed, 7,500 were injured and 300,000 were made homeless in an instant and yet there has been very little accountability since.

In a series of interviews lawyers, investigators and relatives have told Sky News that they remain in the dark, and are desperately seeking answers from authorities in what has become a global web of alleged culpability.

This is the story of enduring pain and a quest for justice.

In the late afternoon of 4 August 2020, Sarah Copeland, a UN worker living in Beirut, was feeding her two-year-old son Isaac.

“It was a completely ordinary day for us,” Sarah told Sky News via Zoom from her home in Perth, Australia.

“We had a very sort of set time routine that we did every day: dinner, bath, a story in bed. And he was having dinner singing his favourite nursery rhyme, Baby Shark and his other favourite one – Alouette….”

At 6.08pm local time, thousands of people were travelling home from work or sitting down for dinner with their families.

Some would have been aware of a fire raging at the port which straddles downtown Beirut and the densely populated neighbourhood of Achrafieh, but no one could have predicted the horror that was about to unfold.

“We had an initial loud bang and I stood up and went to the window to see what it was. But I couldn’t see anything at that stage,” Sarah said.

“I walked back to Isaac and within that period, the second, massive explosion that everyone had seen on TV happened. And I was thrown to the ground and… Isaac was hit with glass.”

Sarah recalls the moment, fighting back tears. In the aftermath of the explosion she would find herself, alongside thousands of others, desperately seeking medical attention amidst the twisted metal and shards of glass that covered the streets for miles.

At the same time as Sarah was rushing her son to the hospital, 22-year old Mehdi Zahreldine was desperately trying to reach his brother Imad, who worked at the port.

“We started calling him to find out where he is, but he wasn’t answering,” Medhi recalls.

“My mother was getting impatient and told us to go to the port. So I headed there with my mum, brother, and sister.

“It took an hour to reach it…I snuck through the security forces into the port because it was off limits, and I got to the grain silos. I have shoes that melted from the bottom because the floor was so hot.

“I started searching, asking people from Civil Defense and the Red Cross started to search with me. We couldn’t find him.”

For five days, Mahdi and his family searched. Finally they were told that the remains of a body that could belong to his brother had been found at the port.

The authorities asked his mother to provide a sample of her DNA and two days later they confirmed that Imad had died. He was 45-years-old and a father of four young children.

In the intervening days, Mahdi would discover a haunting photo of his brother. It showed Imad with two other men. They had been the first to reach the site of the fire raging in the port’s hangar 12. The photo was taken minutes before the huge explosion.

“He was young, he was chivalrous and strong. He has an impulse for this… Not everyone has that heart to go open a [warehouse] door that has nothing to do with him just so he can help people.

“Thank God my brother was like that, and thank God he did what he did. You can say he made me proud.”

The quest for answers

Like so many in Lebanon affected by the blast, Mahdi is furious at the lack of progress the investigation into the port explosion has made six months on.

“This is the crime of the century… From the president to previous and current prime ministers, the minister of public works, and the head of customs and the port authority.

“Everyone who knew about the substance (ammonium nitrate) was responsible for the Beirut Port blast,” Mahdi alleges.

Sky News asked Lebanon’s caretaker justice minister for an interview, but she was unavailable for comment.

With accountability seemingly absent from the official investigation it has been left to activists, lawyers and journalists to keep up the pressure on the authorities.

One person who’s been at the forefront of that campaign is the investigative journalist Feras Hatoum.

His work, alongside colleagues at local TV station Al Jadeed, has uncovered a complex web of “shelf” companies, sanctioned businessmen and international cargo carriers stretching from Russia to Cyprus, Mozambique and Beirut.

Feras has many questions.

“You have three parts: part one is how did the ammonium nitrate come to Lebanon? Second, what happened after the ship came until the 3 or 4 of August?

“And third, what happened on the 4 August and the explosion? It was obvious from the beginning that [the authorities] were only investigating the second part.”

We know that the Ammonium Nitrate had arrived in Beirut on a Russian-registered ship, the MV Rhosus, back in 2013. It had originated in Georgia and was destined for Mozambique.

The official story is that it suffered “technical problems” and was forced to dock in Beirut.

Lebanese authorities then declared it unsafe to continue its journey. The cargo was offloaded and stored in a hanger where it would explode seven years later.

As part of his investigation, Firas spoke to a company called Fabrica de Explosives Mocambique (FEM) in Mozambique which was expecting the ammonium nitrate delivery for use in mining.

They handed him paperwork which named a UK-registered “shelf” company called Savaro Ltd as part of the order chain.

A shelf company is one that is dormant or has no active business. 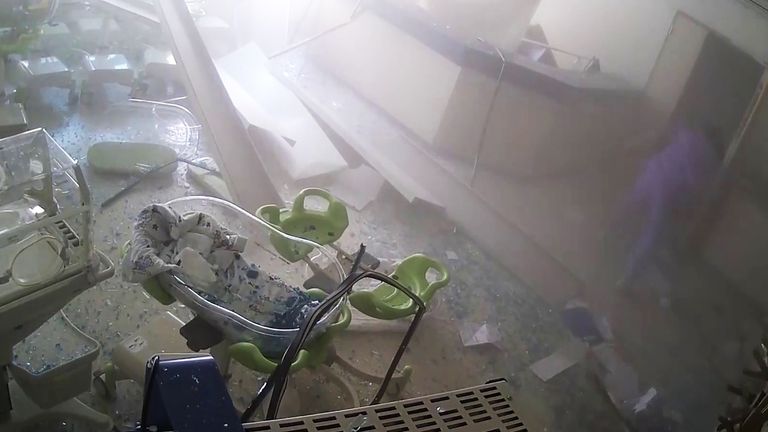 Five CCTV angles of blast from within hospital

Mr Haswani’s company was registered by a Cypriot agency called Interstatus which also registered Savaro Ltd. Both men have denied any involvement with Savaro Ltd.

“You have a Portuguese firm that owns a factory in Mozambique. They ordered, from a factory in Georgia, through a shell company in the UK (Savaro Ltd), which is directed by a Lithuanian lady at that time that lives in Cyprus, a shipment of ammonium nitrate that passed for some unknown reason to Turkey and then to Greece and then came to Lebanon,” Firas says.

Marina Psyllou is listed as Savaro’s owner and sole director at Companies House. Speaking to the Reuters news agency, she said she was acting as an agent on behalf of another beneficial owner, whose identity she could not disclose for corporate privacy reasons.

“As far as we know the company in question, ever since its registration, it remained dormant without any trading or other activity, or keeping any bank accounts, as the project for which it was incorporated was never realized,” she told Reuters.

Firas is careful not to make any specific allegations in his interview with Sky News but says his investigation raises huge questions that no authorities seem able or willing to answer. 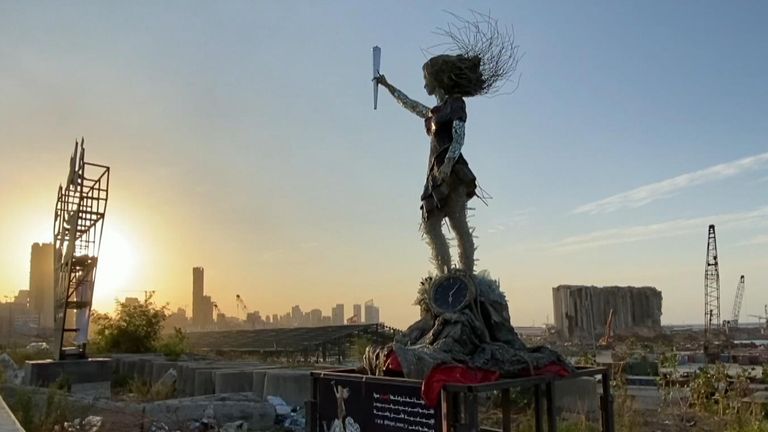 Sculpture made from Beirut blast rubble

“Isn’t it weird that after six months, a journalist, whether it’s me or somebody else, will be the one working on the story of Savaro?

“I have talked to, tried to talk to, the owners of Savaro in Cyprus. We have tried to talk to a lot of people and lots of firms involved in the story and all had one answer in common [to my question]: ‘Did anybody try to reach you from the Lebanese authorities?’ And they said, ‘no, nobody tried to reach us’.”

Melhem Khalaf, president of the Beirut Bar Association, represents the thousands of families affected and he too is hitting brick walls at every turn.

“We put all these efforts to help the people and to give them who they are, not alone. This is the real message. They are not alone, and we will keep moving then the judgement, the final judgement, because we want justice,” says.

“Look. We have… we have to know… Who is involved in this in this [UK] company? We don’t want to be just like, how to say, like just to make a noise. It’s not a noise. We need deeply to know the reality, the truth of this explosion.”

Sarah Copeland’s little boy Isaac didn’t make it. He died shortly after they reached the hospital.

“It’s destroyed our life,” she says, sobbing. “It’s, I mean, Isaac was everything to my husband and I, he was the centre of our universe.”

“For me, as his mother, it’s like, it can be like a physical pain – missing him. It’s like, you know when they talk about people who are missing a limb and they can still feel it and it can hurt. And that’s what it’s like,” she says.

“It’s like I feel him. I feel his absence and it’s painful, physically painful.”

She speaks for all the victims, desperately seeking answers.

Kareem Chehayeb in Beirut contributed to this report.