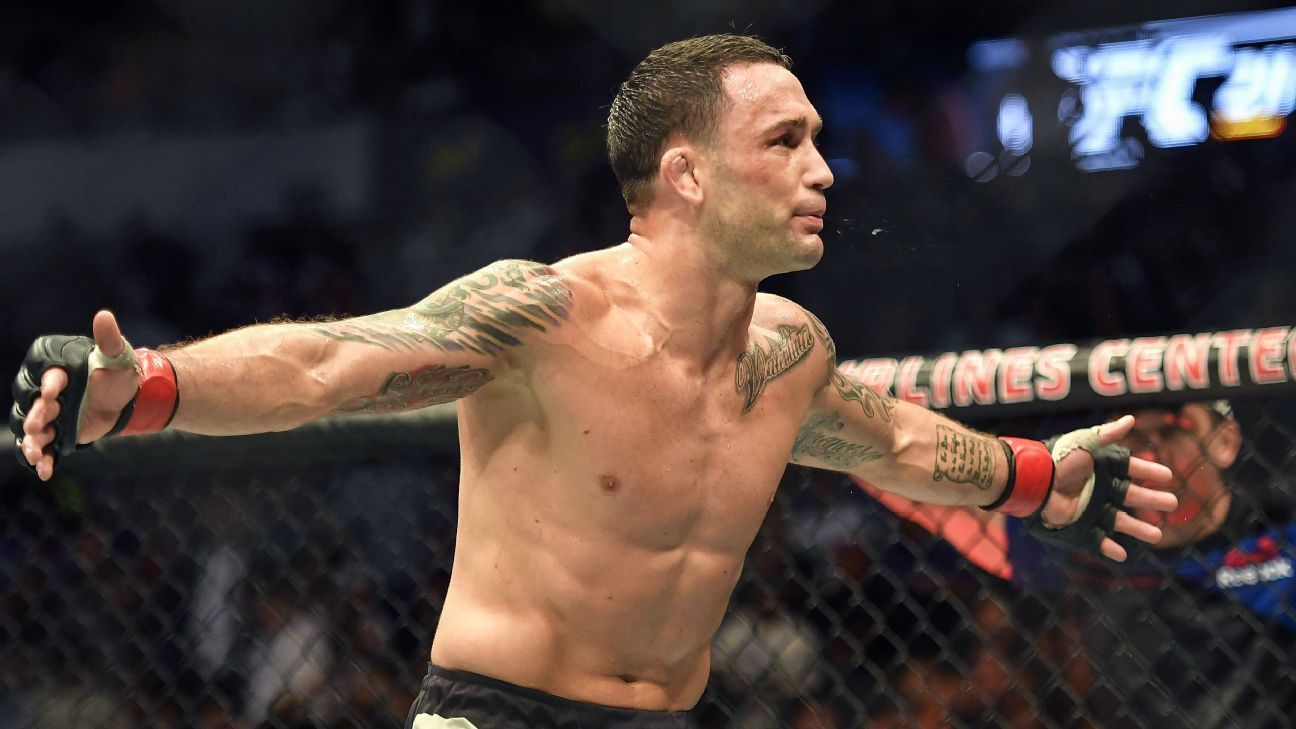 UFC cageside announcers have made that pronouncement on many fight nights through the years as Edgar went on the attack, or battled back, or rose above expectations. Edgar has shown, as much as anyone in mixed martial arts, that when you’re perpetually in motion, you get places.

Since making his UFC debut 14 years ago this week, Edgar has spent 7 hours, 40 minutes, 51 seconds inside the Octagon — more than any other fighter in the promotion’s history — and practically none of that time has been spent in retreat. But longevity and feistiness are just sidebars to his career narrative.

The UFC returns to action on Feb. 6 at the UFC Apex, as Alistair Overeem (ESPN’s No. 6-ranked heavyweight) and Alexander Volkov (No. 7) battle in an opportunity to improve their standing in the heavyweight division. Overeem has won four of his past five, while Volkov is coming off an October win over Walt Harris.

The high-achieving pride of Toms River, New Jersey, has been a fixture in the UFC championship mix for over a decade. Edgar won the UFC lightweight belt in 2010, and for the three years that followed, every one of his fights had a strap on the line. The last in that run of seven straight title bouts was a challenge at featherweight. He competed for the 145-pound title twice more after that.

These days, Edgar fights as a bantamweight. But even as his weight classes have changed through the years, the essence of what makes Edgar a fan favorite remains the same. On Saturday, when he faces Cory Sandhagen in the co-main event of a UFC Fight Night card in Las Vegas, Edgar will once again have to call upon his toughness and savvy to overcome a situation seemingly stacked against him.

Over the last few years, Edgar has been set up as a gatekeeper, a veteran with an impressive resume who offers an up-and-coming fighter a chance to establish himself. But Edgar has shown an ability to spoil those plans repeatedly — and even as he approaches 40, history suggests he shouldn’t be overlooked.

For the fourth straight fight, Edgar will enter the cage in a familiar role as a betting underdog, as the former lightweight champion did in six of his nine career UFC title fights. Sandhagen (13-2) is No. 3 in the ESPN bantamweight rankings, and he’s 5 inches taller and 11 years younger than the seventh-ranked Edgar (24-8-1). But what matters most to Edgar is what’s at stake: A victory on Saturday could put him in position for a shot at UFC gold in a third weight class.

“This fight has big implications,” Edgar said last week. “Sandhagen has been on a tear in this division, and I’m ranked just below him. I really think that the winner of this fight will fight for the title after Aljo.”

Maybe we should be used to it by now — it’s Frankie Edgar, after all — but this is an extraordinary spot to be in for a 39-year-old who not long ago was looking like a fighter nearing the end of the road. In 2018 and 2019, he lost three of his four fights. Even prior to that skid, Edgar was being cast as a UFC gatekeeper. And while he took it in stride, he didn’t let that role keep him from moving forward.

“That’s just the nature of the business, you know?” Edgar said of a 2017 matchup with rising contender Yair Rodriguez, which Edgar won by TKO. “The promoter wants to establish a new guy, and the best way to do that is to have him fight someone who’s known by the fans. My job is to turn his spotlight into my spotlight.”

Edgar knows all about stealing spotlights, because he made his mark in MMA by doing just that. Newer fans of the sport might not fully appreciate the staggering achievement in his 2010 dethroning of BJ Penn, a lightweight legend and a nearly 8-to-1 favorite in the fight. As Edgar recalled, “BJ had an aura about him. He was running through everybody at 155. I think everyone thought my win over him was a fluke.”

Everyone was forced to think differently months later when Edgar thoroughly dominated Penn in their rematch, which Penn entered as a nearly 3-to-1 favorite. “I think I blanked him, five rounds to none,” Edgar recalled. “That’s when people realized that the lightweight division was gonna continue without BJ Penn.”

“The promoter wants to establish a new guy, and the best way to do that is to have him fight someone who’s known by the fans. My job is to turn his spotlight into my spotlight.”

Frankie Edgar, on being perceived as a gatekeeper in 2017 against Yair Rodriguez

And yet the best was still to come. What truly shaped the legend of Edgar was his next fight, one he did not even win. Edgar was absolutely wrecked in the first round of his title defense against Gray Maynard, knocked down three times, which at the time was a UFC record for a fight, not just a round. But Edgar displayed just enough gumption that referee Yves Lavigne allowed the fight to continue, and the champ battled back over the next four rounds to retain his belt in the most memorable draw in UFC history.

Memorable to fans, but not to Edgar. His only recollection, even 10 years after the fact, was of sitting on his stool between rounds and hearing both of his coaches, Mark Henry and Ricardo Almeida, yell into his face that there was just one round remaining. “And in my head,” Edgar said, “I’m like, ‘One more round? What happened to two, three and four?'”

Henry, who has coached Edgar since his MMA debut, remembers that night well. He remembers barking out instructions throughout the five rounds, remembers his beaten-down fighter executing every single thing he asked from him. Henry also remembers having mixed emotions.

“I love Frankie. He’s like a little brother to me,” he said. “His toughness is legendary, but I didn’t want to see him taking beatings like that from bigger guys.”

Not all lightweights, after all, are created equal. Fighters typically starve and dehydrate themselves prior to weighing in, but on the day of weigh-ins for the Maynard fight, Edgar’s team kept giving him food and drinks. “Frankie was four or five pounds under the limit,” Henry recalled. “We didn’t want to be embarrassed on the scale.”

Nine months later, just weeks after Edgar had fought Maynard again and — after taking another first-round beating — had added to his legend by knocking out his nemesis, Henry heard news that he thought would change everything. On Oct. 28, 2010, UFC president Dana White announced that the company was absorbing its sister promotion the WEC, which was home to lighter weight classes that had no home in the UFC. Henry called his fighter that very day, knowing that Edgar had always resisted a move to featherweight or bantamweight because he wanted to compete in the UFC, not some other promotion.

“Yeah, the day the UFC added the 145- and 135-pound divisions, I begged Frankie to move down, even though he was champion at 155,” Henry said. “But he wouldn’t do it. He didn’t want to look like a punk for fighting smaller guys.”

So he continued to fight bigger guys.

The resiliency Edgar showed during his reign in one of the UFC’s fiercest weight classes is even more impressive when looking back on it a decade later — with Edgar now competing in a division 20 pounds lighter. “I’m a disciplined guy,” Edgar said. He paused, then added, “Plus, this is probably the weight class I should have been fighting in from the get-go.”

That became evident when Edgar described his process for hitting the bantamweight limit. When he decided last year to move down to 135 pounds, he said, “I told myself that to make the weight cut manageable I had to make sure I never weighed over 160 pounds, even in the offseason.”

Asked what his upper limit was between training camps back when was competing at 155 pounds, Edgar laughed. “Honestly,” he said, “I never really got over 160 then, either.”

And yet Edgar would not change a thing about his years of fighting off bigger, stronger men. That’s the martial arts spirit that drew him inside the Octagon in the first place.

“In the early days, everyone got attracted to this sport because Royce Gracie was fighting bigger guys and using his skills and technique to beat them,” Edgar said. “I feel like that’s kind of what I did in the beginning. I had to use my skills, my technique and my heart.”

Especially heart, which now is set on him making an impact in a new domain. Saturday’s fight will be Edgar’s second at 135 pounds, following a victory over top-10 bantamweight Pedro Munhoz last August — another instance of Edgar stepping into a moment designed for the ascension of his opponent, and making it his.

“Maybe my body would have appreciated a move to this weight class sooner,” Edgar said, “but I like the fact that I have spanned three weight classes and I’ve had success everywhere I’ve been.”

While 125-pound champ Deiveson Figueiredo need not be looking over his shoulder for an oncoming challenge — “No, no,” Edgar said with a laugh, “the buck stops here at ’35” — the ride doesn’t seem like it’s ready to stop quite yet.

“Father Time is undefeated, I’m not naive to that,” said Edgar, who turns 40 in October. “But I’m enjoying what I’m doing, my body feels good and I’m still seeing success. As long as I check off those three boxes, I’ll do this for as long as I can.”

Of course, this could change at a moment’s notice — that’s the way things go in the fight game. And while it’s a sacrilege down the Jersey Shore to compare anyone to Bruce Springsteen, the two New Jersey natives share a common essence — regular guys who’ve made it, while not losing touch with the inner “regular” guy. They are iconic representations of what the underdog can accomplish by persistently channeling the hunger they’ve had from the start.

“You have to love what you do, and Frankie loves all of it — the fights, the training, everything,” Mark Henry said. “Success has not changed that in him. I think it was Marvin Hagler who said, ‘It’s tough to get out of bed and do roadwork when you’ve been sleeping in silk pajamas.’ Well, Frankie could live in a palace and still get up every day and run 20 miles. That has not changed in the 16½ years I’ve known him. He’s the same guy.”

Harry and Meghan’s documentary trailer released
Why Silicon Valley is so hot on nuclear energy and what it means for the industry
‘May the Force be with you’: PM ‘sad’ as Javid to step down at next general election
Russian oil sanctions are about to kick in. And they could disrupt markets in a big way
Elon Musk’s firm accused of welfare violations after killing 1,500 animals in four years – report