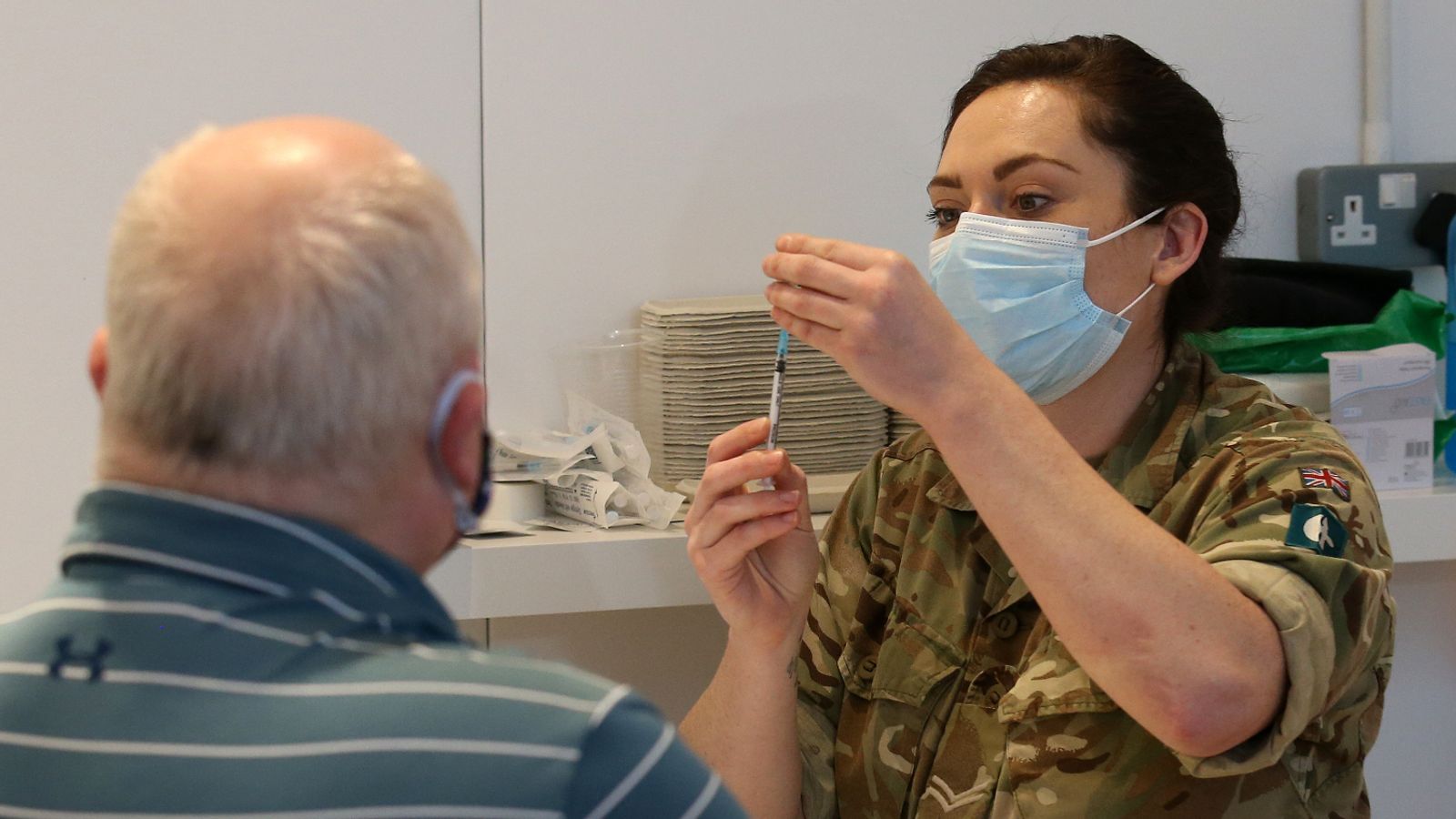 The number of new coronavirus cases in the UK has fallen once again, with almost 11 million people having now received their first vaccine dose.

There have been a further 19,114 confirmed cases of COVID, compared to 20,634 yesterday and 29,079 a week ago, according to the latest government data.

Another 1,014 people have died after testing positive. It comes after 915 deaths were reported yesterday, and compares to 1,245 last Friday.

Live COVID news from the UK and around the world

Asked about what lockdown restrictions could be loosened next month thanks to the speed of the UK’s vaccine rollout, Health Secretary Matt Hancock said: “It is still too early to say that… even though the vaccine programme is going great guns – almost 11 million people now have been vaccinated.

“It is still too early to say with 31,670 people in hospital with COVID as we speak right now – that is far, far too many.

“The NHS is still under pressure and we’ve all got to do our bit to keep those case rates coming down.”

Yesterday, the government announced that one in five UK adults had been given first doses of a COVID vaccine.

Mr Hancock said that the UK was on target to offer a jab to 15 million people by 15 February, encompassing the top four priority groups.

The government has since announced a target for all over-50s to be reached by the vaccine rollout by May.

Mr Hancock said: “My plan is that we should be able to offer a vaccine to everybody in categories one to nine – that’s all the over-50s – by May.

“Lots of things have got to go right to hit that goal, especially supply, which is the rate-limiting factor, but I’m sure, working with the NHS and everybody else who is making this happen, that if we keep going at the pace we can, then we can make sure all the over-50s get the offer of a vaccine by May.”

It comes as researchers found that the Oxford/AstraZeneca vaccine – which has been largely responsible for the UK’s quick rollout – remains effective against the variant of COVID that was first found in Kent and the South East.

Researchers say the jab shows a similar efficacy against the variant compared to the original.

Sky News has also been told by government sources that ministers have begun looking into the creation of digital immunity passports.

Research groups are said to have been set up to explore the possibility, as countries look ahead to the possibility of a return for international travel.

Earlier today, the Scientific Advisory Group for Emergencies (SAGE) announced their latest estimate for the R number in the UK – and it has narrowed slightly to between 0.7 and 1.

This means that for every 10 people who have the coronavirus, another seven to 10 people will catch it.

Number of landlords selling up rises by nearly 13% in four months
Crushing defeat for Rishi Sunak is an ominous sign for despondent ‘Red Wall’ Tories
Royals’ blighted US trip to end with Biden meeting and Eilish at prizegiving
‘They were going to find a way to destroy me’: Harry and Meghan’s bombshell documentary airs
Big win for Joe Biden as Democrats land outright majority in the US Senate, NBC News projects