US jobs growth bounced back less than expected in January while losses the previous month were worse than initially thought, latest figures show.

The first set of employment data under President Joe Biden underlines the scale of the economic challenge faced as he seek to push through a $1.9trn (£1.4trn) COVID-19 recovery package. 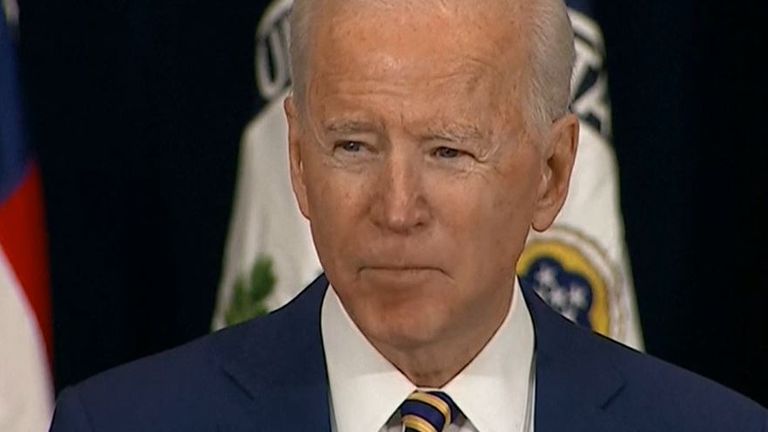 ‘America is back’ says Joe Biden

The Labor Department has said non-farm payrolls increased by 49,000 jobs last month, slightly down on economist forecasts of 50,000.

Statistics for December were revised to show 227,000 jobs had been lost instead of 140,000 as previously reported.

This drop was the first in eight months and came amid renewed restrictions on businesses like restaurants and bars to curb a resurgence in coronavirus infections.

While the jobless rate fell in January to 6.3% from 6.7%, this is still well above the pre-pandemic level of 3.5% and more than 10 million Americans are unemployed.

The closely watched employment report will strengthen the argument for additional relief money from the government.

Employment is more than nine million jobs below its peak in February 2020, and the authorities in Washington estimated it would not return to its pre-pandemic level before 2024. President Biden is pressing the US Congress to pass a massive stimulus plan, which has been met with resistance from mostly Republicans, worried about the growing national debt.

Meanwhile, separate figures revealed the US trade deficit rose 18% last year to $679bn (£495bn) – the highest since 2008 – as the coronavirus crippled global business and thwarted Donald Trump’s attempts to rebalance the scales with the rest of the world.

The gap between the value of the goods and services the US sells abroad and what it buys climbed from $577bn (£420.5bn) in 2019, according to the Commerce Department.

As president, Mr Trump had sought to narrow the gap by imposing taxes on imported goods on a scale unseen since the trade wars of the 1930s.

The deficit narrowed slightly in 2019 but then ballooned last year as coronavirus restrictions hammered US exports of services such as tourism and education.

The politically sensitive deficit with China in the sale of goods fell 10% last year to $311bn (£227bn) after Mr Trump imposed tariffs on $360bn (£262bn) worth of the country’s imports, accusing Beijing of unfair trading practices and intellectual property theft.

Cost of living crisis: Working but ‘getting deeper and deeper into debt’
Six of the best bits you might have missed at Glastonbury
‘Wholly wrong’ to block Sky News questions about JK Rowling, admits Warner Bros
Google says it will delete location history for visits to abortion clinics after overturning of Roe v. Wade
Government considering 50-year mortgages that could pass down generations