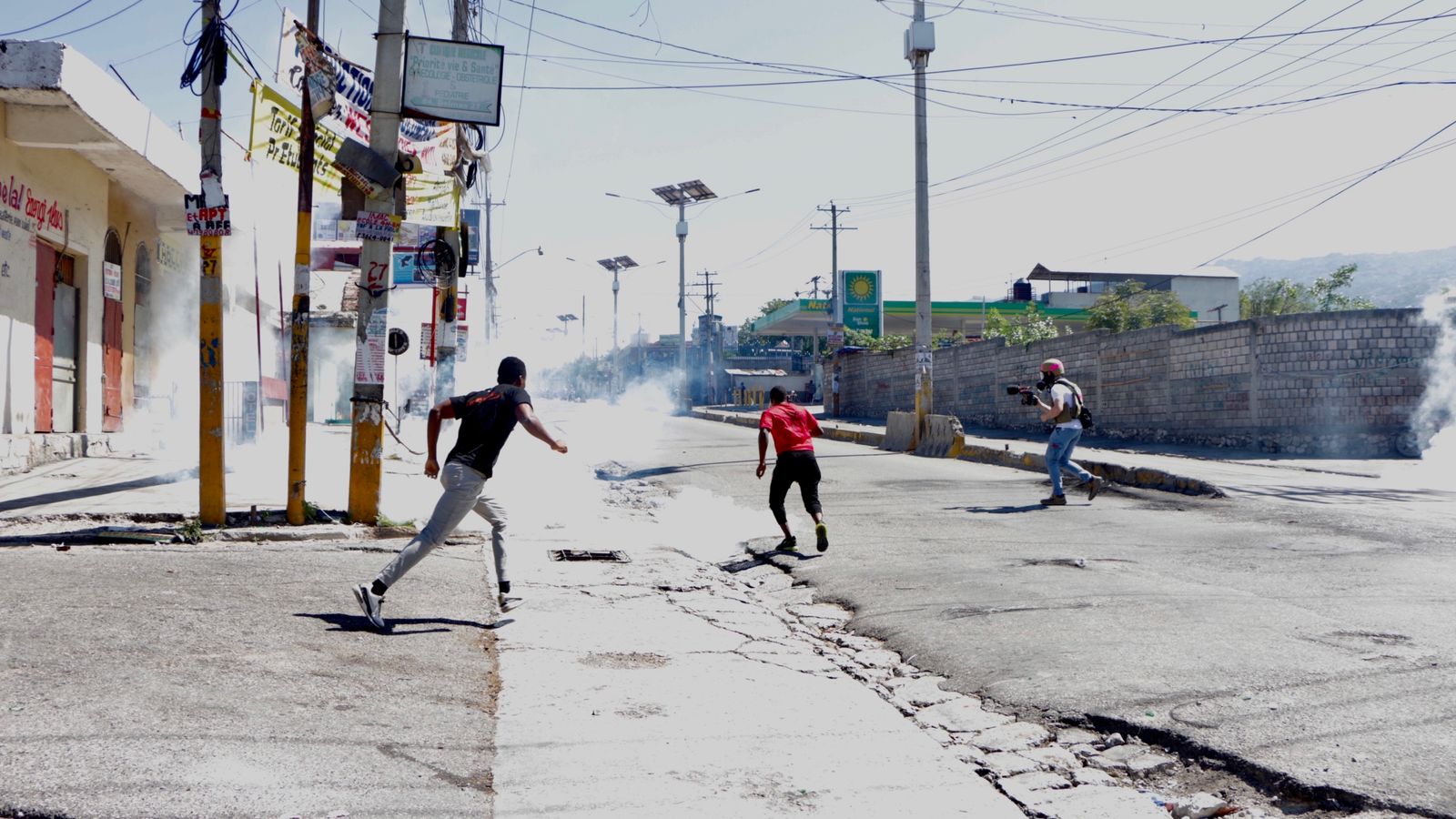 The impoverished country of Haiti – already an economic disaster zone with organised crime and kidnapping for ransom out of control – now finds itself in the midst of a constitutional crisis with violent confrontations between anti-government protesters and the police a daily occurrence.

The country’s leading opposition parties, the judiciary and activist groups say the presidency of Jovenel Moise ended on Sunday after a five-year term.

The president says he has one year left in office, as an interim government ran the country for a year after his election.

Despite repeated efforts and a continual weakening of his position the president, supported by the United States and most of the international community, is refusing to budge.

The opposition, which is itself a disorganised grouping of former presidential hopefuls, is calling the people on to the streets to force the president’s removal.

But recently, strong-arm tactics of the police on the streets and gang-led intimidation have effectively been breaking up protest marches before they can even form.

For three days we have been on the streets of the capital, Port-au-Prince, as communities attempted to demonstrate.

Haiti has a reputation for violent confrontation and it’s easy to see why.

Billowing clouds of tear gas filled the streets in the capital as we travelled through rock strewn streets, around makeshift barricades, past burning tyres, cars and rubbish.

It felt like a war zone, and to a degree it was.

Police passed by as we filmed, shooting live rounds indiscriminately at anyone who moved.

Through the gas, protesters would flee down the streets, the young and old clutching their eyes as the stinging gas enveloped them.

At a major intersection, where the protest marches usually form, they tried setting fires and built barricades, but the security forces were having none of it.

Riot police in 4x4s roared down the road firing volleys of gas and shotgun rounds before dismounting and taking aim at the protesters who fled in every direction.

Some officers found themselves cut off from their units and were pelted with stones before colleagues came to their rescue – firing continuously at the rock throwers.

The plan was to disrupt and deny the marchers, and it worked. But for how long the police can keep this up depends greatly on the will of the people, and the ones we met seemed determined.

Travelling through Port-au-Prince, it is not difficult to see why people are unhappy. The city is a hell hole of poverty. We passed rows of filthy tented structures on a grey-black wasteland. It looked utterly horrendous. We were astonished to find that it was actually a vast functioning market.

Sixty percent of the population live in abject poverty, the streets look more like a battle-torn city than a functioning community, and everywhere stand destroyed or crumbling buildings.

Eleven years ago, Haiti was smashed by a huge earthquake. I covered that story, and the streets look exactly the same now as they did then; that is because they are. Absolutely nothing has been rebuilt. Time has stood still.

“It really is a disgrace. Huge amounts of aid money came here to rebuild. Nothing has been done. All the money has been stolen.”

A number of factors have contributed to this crisis in Haiti.

The people say the president has failed to do anything for them, that he has overseen rampant corruption, that the economy has continued to bomb.

But, worse than this, far, far worse in fact, is the explosion in kidnapping for ransom that is now endemic throughout all society, from the poorest to the richest.

Everyone is targeted and nobody is safe. This is perhaps the greatest source of discontent.

Gangs appear to act with impunity. The opposition and its supporters blame the president for either allowing or actually aiding and abetting the operations of the gangs for political means.

Opposition areas were routinely the targets for the kidnapping gangs, but now it is everywhere.

“If I get in my car I wonder if I am going to be next. I now drive to places I would have easily walked to, but not anymore, and it is the same everywhere,” she said.

On our motorbikes, we passed into some of the poorest communities, squeezing past barriers of cut down trees, bent over lamp posts and cement blocks, eased aside to let us pass.

These communities are terrorised by kidnap gangs and organised crime, so they have barricaded themselves in and carry machetes to protect themselves. But it is of limited success.

Leaders talked of multiple gangs, with names like “The Spitfires”, who carry out robberies and what they described as massacres and kidnappings.

They uniformly blame the president. When I asked what they would do if he refuses to stand down, I was greeted with a roar of anger from everyone around us.

“His mandate is finished, he must go,” Alexander Mark Andre told me, accompanied by cheers from the crowd.

As the protests grow, as the violence continues, it’s hard not to acknowledge what many have been predicting, and what the United Nations is warning: that this small nation is sliding into absolute anarchy.

Tyre Nichols’ mother says she’s ‘not going to stop’ until those responsible for son’s death face justice
Quick Charge Podcast: January 28, 2023
‘Stop playing games’: Union takes aim at PM with thousands of ambulance workers to strike over pay
Sanders on Colorado’s class: Hope ‘in the house’
‘Nobody is born smart’: Ex-commander of Russian mercenary group apologises for fighting in Ukraine