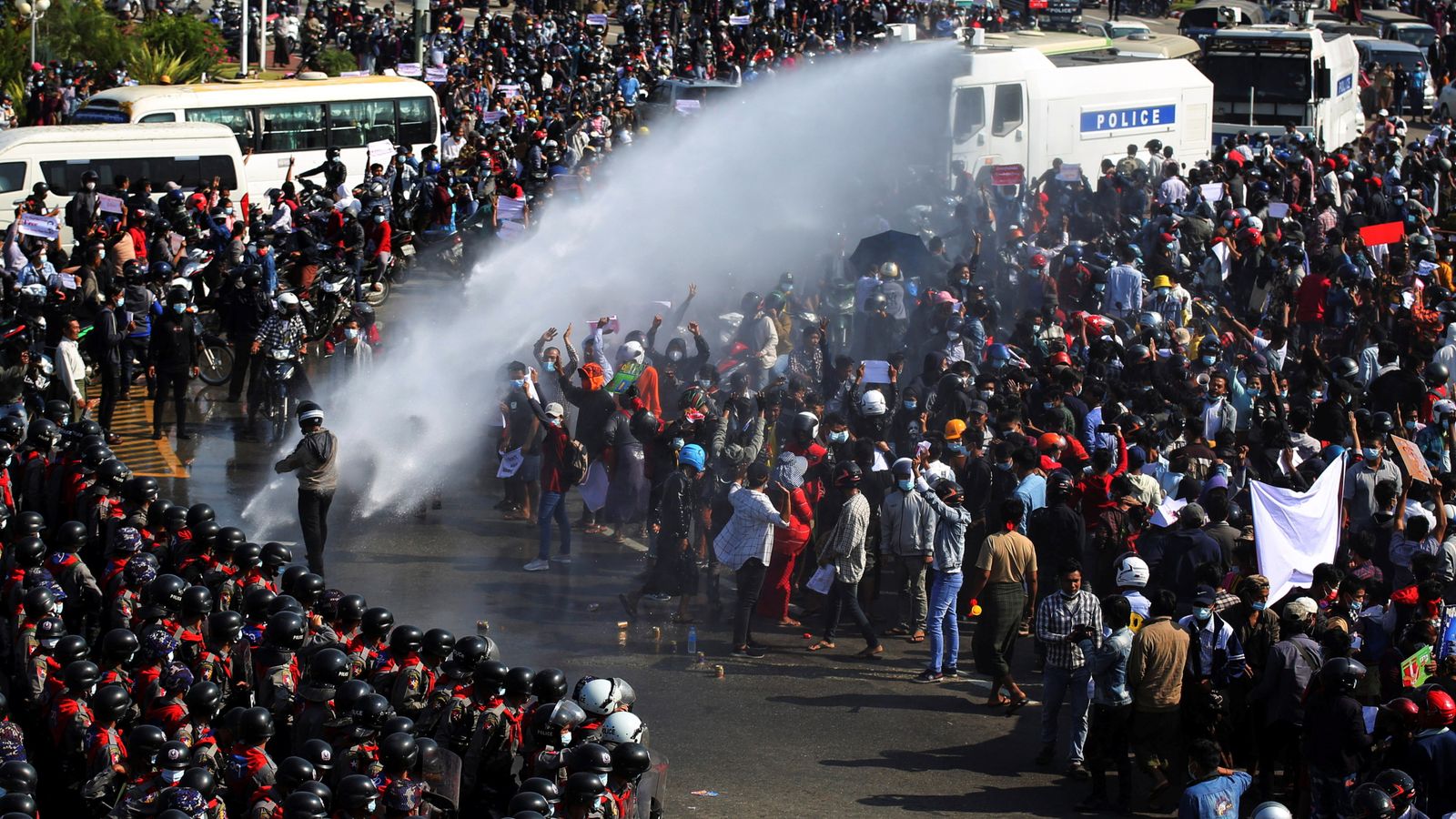 Police have fired a water cannon in Myanmar’s capital as tens of thousands of people across the country protest over last week’s military coup.

Demonstrations are growing in the southeast Asian state in a bid to get elected leader Aung San Suu Kyi and her government reinstated.

The peaceful protests swelled over the weekend and are believed to be the biggest since the Saffron Revolution in 2007.

Video from the capital, Naypyidaw, on Monday showed water cannon bursts fired at a group of protesters for about five minutes.

Witnesses told Sky News there were some minor injuries and that the crowd negotiated with police before dispersing.

Thousands have also taken to the streets in the coastal city of Dawei and in the Kachin state capital in the north.

Monks joined protesters in the biggest city of Yangon, with signs among the crowd reading “say no to dictatorship” and “save democracy”.

The demonstrations continued there on Monday, with people chanting, holding placards written in English, and some giving the three-finger salute from the movie The Hunger Games.

Some smaller groups headed to the Sule Pagoda, a previous rallying point for protests against the military.

There are also reports of protests in the second-largest city of Mandalay, with a convoy of motorbikes joining demonstrators on foot.

Police shot into the air to to disperse a crowd near the Thai border on Sunday – with a watchdog group claiming one woman was shot – but so far there appear to have been no serious clashes.

Deadly force was used to end previous uprisings in 1988 and 2007 and there are fears things could escalate in that direction.

Some workers, including doctors, teachers and other government workers, have also joined a campaign to go on strike.

“We request government staff from all departments not to attend work from Monday,” said Min Ko Naing, a veteran activist of the 1988 uprising.

Awareness of the protests has grown after a day-long ban on internet access was lifted on Sunday.

The Myanmar military ruled directly for more than five decades, but Ms Suu Kyi’s government became the first civilian-led administration in decades in 2015. However, its power was limited by a military-drafted constitution.

Myamar’s election commission has said it found no evidence of fraud in last year’s election and the international community has condemned the coup – with America considering sanctions.

Ms Suu Kyi’s party met online on Friday, after being banned from gathering at parliament, and declared themselves the legitimate representatives of the people and asked for international recognition.

Ms Suu Kyi, 75, is being held by police and her lawyer has said he has not been allowed access.

Analysis: No intention to return democracy to Myanmar anytime soon

With the number of anti-coup protestors on Myanmar’s streets swelling with every passing day, today water cannon was used for the first time.

An eyewitness told us police fired without warning on a crowd of peaceful protestors in the capital, Naypyidaw.

He said several people suffered injuries, none of which seemed serious, but that tensions eased slightly following negotiations with officers on site.

However, there are concerns that this could be a sign of things to come.

State TV today carried ominous messages that people who disturbed public stability “should be countered by effective measures and action will be taken according to the law”.

This, as vans of pro-military supporters were seen driving towards downtown Yangon, prompting fears that violence could break out if the two sides met.

Despite this, the mood of pro-democracy supporters in the city was determined and positive as tens of thousands again took part in demonstrations.

Many of the protestors carried signs in English calling for an end to military dictatorship, a clear signal that they believe any return to democracy will require some type of intervention from the outside world.

Twenty-five-year-old student Aye held a banner reading: “I don’t want dictatorship, I just want a boyfriend,” one of a number of attention grabbing slogans aimed at the West.

“When Aung San Suu Kyi was ruling the country we had developments such as education and job opportunities. I want her leadership, not a military dictatorship,” she said. “I want Aung San Suu Kyi and the president to be released as soon as possible.”

It’s a demand shared by many, along with a call for a return to democracy.

While both are reasonable, they also increasingly unlikely – a week after the military seized power in an illegal coup, it’s clear it has no intention of returning it any time soon.

The ‘tear-gassed’ Palestinians trying to stop Israeli settlers occupying their land
‘Nobody is born smart’: Ex-commander of Russian mercenary group apologises for fighting in Ukraine
Some of Wall Street’s biggest names are exposed to the Adani Enterprises plunge
One of UK’s most wanted arrested in Morocco over Essex drive-by shooting
Dances With Wolves actor ‘trained wives how to use guns if police tried to break up family’