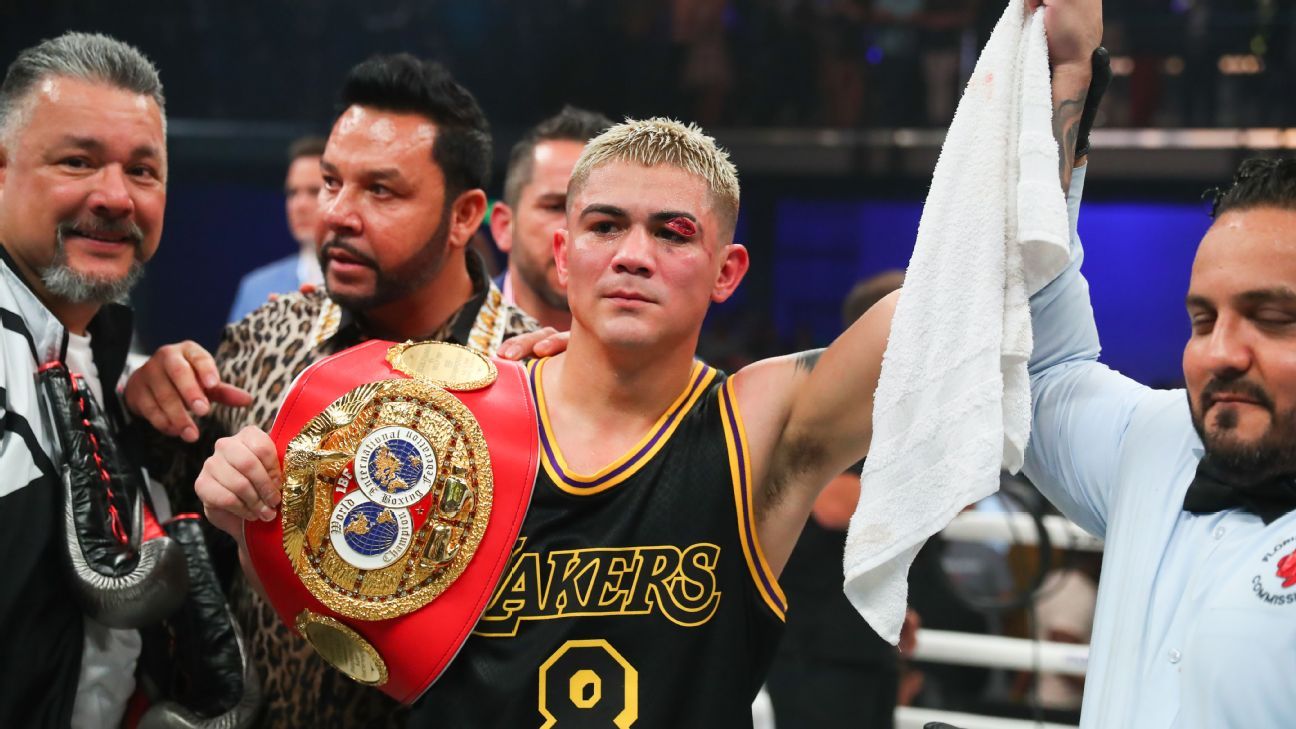 Like so many kids in so many towns across the United States, Joseph Diaz Jr. started young in a T-ball league. He was 4 when his father, Joseph Sr., signed him up so he could pick up the basics of how to throw, hit and catch.

Joseph Jr., or JoJo, as he’s more commonly known, took to the sport quickly. By the next year, he was on an all-star team. Then another. Then another. Travel ball loomed, and he started playing that, too. By middle school, JoJo Diaz could do a little bit of everything. The left-hander pitched. He caught. He played the outfield and, despite his small frame, a little bit of first base, too.

Diaz Sr. started to think there could be a future for JoJo in baseball, and that maybe his son could eventually earn some scholarship money for college.

That’s because when JoJo was 8, the elder Diaz took him to a boxing class. JoJo lasted three months before he was enrolled in taekwondo. A few years later, they tried boxing again, as Diaz Sr. took JoJo to the South El Monte Teamsters Youth Boxing Club in their California town when he was 10 or 11 years old. The father didn’t intend for it to go further than JoJo learning how to protect himself, throw a punch and then move on. Both boxing and taekwondo were intended to give JoJo a way to defend himself in school.

But one day inside that boxing gym changed the course of JoJo’s life — he was able to fight back against one of the kids who was picking on him.

“He ended up sparring a couple kids, and one kid he sparred, he made him bleed and stuff like that,” Diaz Sr. said. “After that, he got hooked. It kind of backfired on me a little bit.

Young me inspired by @TheLatinSnake_ fresh off his contender victory pic.twitter.com/qLypaCEWck

Two decades later, JoJo is 32 fights into a pro boxing career — 31-1 with 15 KOs — and he carries the IBF junior lightweight world title into his first defense of that belt on Saturday against Shavkatdzhon Rakhimov. But for a few key moments and circumstances in his childhood, it all could have played out very differently.

It wasn’t an easy decision right off the bat. For a while, JoJo participated in both sports. He became an accomplished boxer while continuing his ascent as a baseball player. During his freshman year of high school, he would leave baseball practices an hour or so into the workout to go train in the boxing gym. Yet he’d still play in the baseball games. He had that much potential — and as a left-handed pitcher with control, he had a valuable skill set. There was talk of JoJo moving up to varsity as a sophomore.

JoJo started to weigh his options for his future. In baseball, as his dad hoped, maybe he’d get some money for college. The big leagues were a long shot under any circumstances, and for someone who was still under 5 feet tall at the time, the scales were even more imbalanced. In boxing, there were weight classes and divisions and more options. Plus, he’d already had success.

But even with as much time as boxing was starting to take up, his baseball ability and love for the game made it tough to leave it behind.

“He came up to me and said, ‘Hey, is it OK if I just go to the games and not go to practice? Because I’m a boxer,'” said Gilbert Adame, then the baseball coach at South El Monte High. “I can’t do that, because it just wouldn’t be fair to everybody else.”

The fact that more than a decade later, a freshman who never played varsity still sticks in Adame’s mind speaks to what JoJo might’ve been. But in turning down JoJo’s request, Adame told him to make a choice — baseball or boxing. It might sound silly now, as JoJo became an Olympian in boxing and won a world title, but it was a real decision in the moment. JoJo asked for a night to think about it.

“My dad said do what you honestly love,” JoJo said. “I started thinking and started brainstorming. Baseball, I’m a really good baseball player, but I don’t know, man, because I’m very, very small. I was 4-foot-10 at the time. Now I’m 5-7, but at the time I was 4-10, 5-foot. I don’t think baseball players are that short, so the best I can do with baseball is probably get a scholarship somewhere and get a degree so I can go to college somewhere.

Diaz Sr. told him he’d support whatever decision he made — and JoJo’s mind was clear.

“I never imagined somebody being on the Olympic team and becoming a professional someday. I didn’t know he was that good,” Adame said. “Like I said, he made the right choice, because I don’t think he would have gone that far in baseball.”

Baseball remained in Diaz’s heart, even as his playing days ended. He still will play catch with friends on occasion and loves the Dodgers, once spending thousands of dollars to sit close to the field for Game 7 of the 2017 World Series at Dodger Stadium, which the Dodgers lost to the Houston Astros. And in case he ever needs a reminder of the path not taken, all he does is look at his left arm.

As a young pitcher, he could throw a two-seam and four-seam fastball, a changeup and began experimenting with an on-point 12-6 curveball. Diaz Sr. didn’t want him to throw it. Kids being kids, JoJo didn’t listen.

JoJo stands up as he’s explaining the consequences.

“See, like, I can put this elbow straight, but my left hand I can’t put straight anymore,” JoJo said. “Because at a young age, when I was 14, I started throwing curveballs and jacked my elbow up, man.”

JoJo never had surgery on it. He stopped playing baseball, so he didn’t need to. You might think it would hurt him as a boxer to not be able to extend his left arm all the way out. His results to this point are evidence enough that’s not the case.

“Nah, I can throw my straight hands,” JoJo said. “I just can’t extend it all the way.”

With that, he laughs a little. These are old memories now, ones he enjoys and can look back on fondly because he knows — when he had to, he made the right decision for his future.