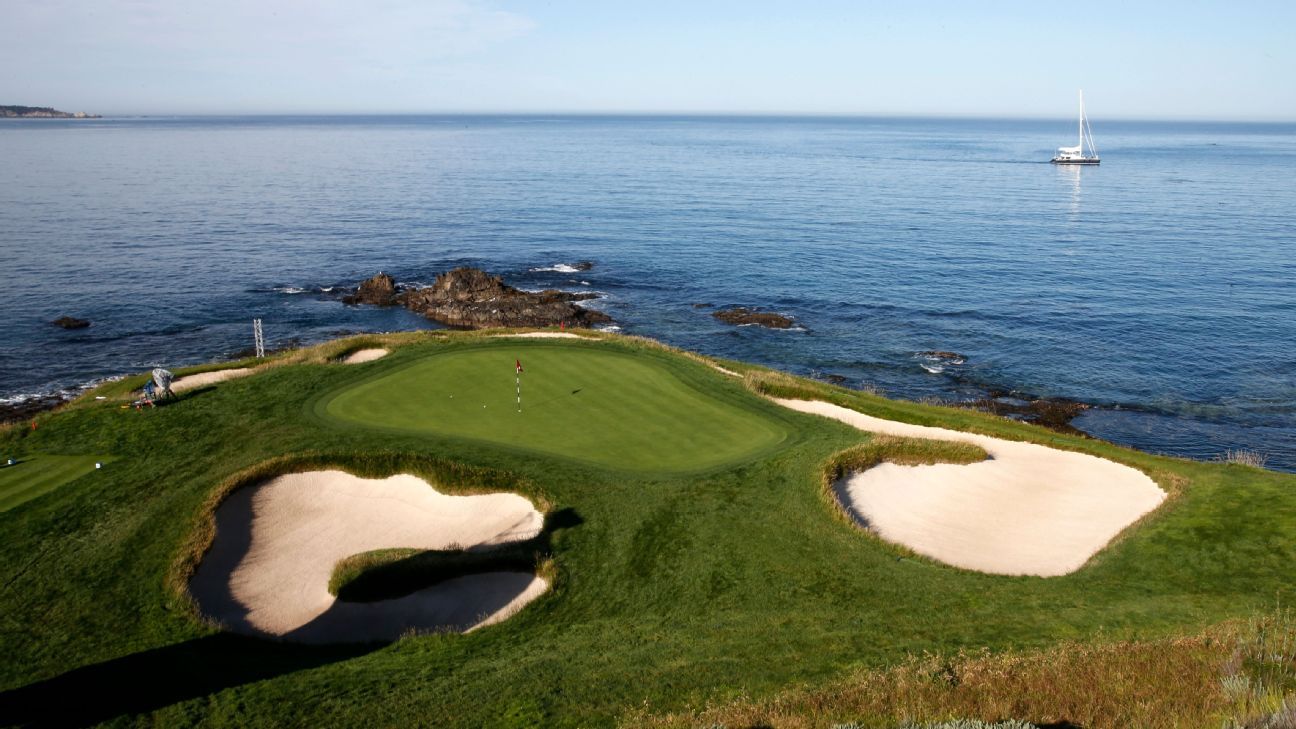 Like all golf tournaments during the pandemic, Pebble Beach will look considerably different this week. Perhaps more so than any other event. Sure, unobstructed views of the coastal waters will be nice, as will some other perks associated with watching in non-spectator times.

But for the first time in the AT&T Pebble Beach National Pro-Am’ s 75-year history on the Monterrey Peninsula, there will be no amateurs, no celebrities.

While that might be welcome to some of the players who are competing — those long rounds will move a little faster now — and maybe even some of those who are watching, it is nonetheless a stark reminder of the times and a blow to the event’s long history.

“It breaks my heart,” said Peter Jacobsen, a seven-time PGA Tour winner (and twice a winner on the Champions Tour), later a broadcaster and a long-time supporter of the tournament. “It’s my favorite event. And the most important event on tour, one of the most fun events on tour.

“But it breaks my heart that we aren’t going to see amateurs at the AT&T. That’s what makes it so special. The fact that we can spend five or six hours on a golf course with a corporate CEO who may title (sponsor) a PGA Tour event or a Champions Tour event is essential to our business. It’s the most important aspect of what we do. It’s the most important time with these women and gentlemen who support our game. I always say shame on the players who don’t play. It’s that important.”

You can see why Jacobsen’s name was often mentioned as a potential future PGA Tour commissioner.

Now 66, Jacobsen was looking to play the event one last-time with long-time partner Huey Lewis. For 19 years, Jacobsen played in the tournament with actor Jack Lemon, who famously said he’d return one of his Oscars if it meant making the Pebble Pro-Am 54-hole cut; he never did.

Because of the coronavirus pandemic and the inability to have an amateur partner, Jacobsen elected to postpone his final tournament appearance. Tournament organizers and the PGA Tour announced several weeks ago that not only would the tournament be played without spectators, but the 156 amateurs who play three rounds of Pebble Beach, Spyglass and Monterrey Peninsula would not take part this year.

Because so many amateurs travel from around the country and the world to play, and with the added issues associated with testing and distancing, it was simply believed it was best to proceed in this manner.

“It just didn’t feel right,” said Steve John, the AT&T tournament director. “The (PGA) Tour knows what it is doing. We’re the 28th event since the restart (in June) and our sport was one of the first to come back successfully. There have been minimal COVID positives. And we knew we could do this safely.

“But (to have amateurs), you start adding all the layers. More volunteers are needed. And at the end of the day, it didn’t make sense to continue with that model. No one really wanted it to come to that.”

Like every other tournament that is playing during these times, Pebble Beach is taking a huge financial hit, although John said many of those who pay upwards of $30,000 to play in the pro-am have not requested their money back. They see it as a way to help the charities that will be impacted with less revenue Still, there is considerable ticket and hospitality revenue lost.

“Our revenue stream from ticket sales is roughly $2 million,” John said. “That’s gone. But everyone suffers. Hotels, rentals cars. Nobody in the restaurants. The hit is beyond our tournament. Those ticket sales are a revenue stream we can’t recover. The whole thing is really strange. It’s weird to look out there and see nothing but the TV towers. But the golf course is spectacular.”

Because the amateurs are not participating, it will be 156 players competing at just Pebble Beach and Spyglass. The cut will come after 36 holes instead of 54. And there is a good possibility the courses will be set up more severely, with more difficult pins and tees because it will be pros only.

Jacobsen has played the tournament 30 times. Because of a unique exemption structure, anyone who won the tournament prior to 2000 (and those in the last five years) is exempt to play. Jacobsen won in 1995. It’s also why you’ll see the likes of Tom Lehman and John Daly, because they won majors prior to 2000.

For years, the tournament was known as the Bing Crosby Pro-Am or simply the Crosby Clambake. That officially changed in 1985, when AT&T became the title sponsor.

While there are less celebrities and far more corporate entities involved today, Jacobsen said it doesn’t make it any less important.

“I’ve always said I don’t care how wet or cold it is, or how slow the greens are, or the long rounds … it is essential to the business of the PGA Tour. And if you love golf, you want to play inside the ropes with Phil (Mickelson) and Tiger (Woods) and Bryson (DeChambeau) and Rory (McIlroy). We have to recognize the importance of that because they think so much of our game that they are going to drop some sponsorship dollars. And there’s no greater validation of what we do than that.”

Brooks Koepka has done a good job of putting up a tough-guy front through his injury woes of the last 18 months. But he admitted after his victory this past weekend at the Waste Management Phoenix Open that there were some dark moments.

Koepka had just come off another strong season in 2019 when he won the PGA Championship for his fourth major title; he later won a WGC event. Following the Tour Championship, where he played in the final group with Rory McIlroy, he underwent a stem cell procedure on his left knee and returned after six weeks.

But he slipped on a path while playing the CJ Cup in South Korea, aggravating the knee problem and knocking him out of the Presidents Cup. Throughout 2020, Koepka never seemed right, battling the knee as well as hip issues. He got into contention at the PGA Championship, but didn’t even qualify for the FedEx Cup playoffs. And he missed the U.S. Open, where he had gone 1-1-2 in his last three starts. Things seemed dire.

He also split with his long-time coach, Claude Harmon III, just a few days following the Masters this past November.

“I think the lowest moment probably was Memorial for me (last July),” he said. “I was in excruciating pain. I was being told that my knee was still the same. The frustration of just trying to play and knowing I’m not myself, knowing I’m not even close to what I’m capable of doing, I can’t compete. I’m trying to compete, but I just can’t. I can’t swing the golf club like I want.”

Koepka has undergone a rehab process that saw him make some physical progress. And yet, he had missed the cut in three consecutive events for the first time in his career.

At TPC Scottsdale, Koepka found his form. He hit 86.1 percent of the greens, his best performance since he won the 2017 U.S. Open. The highlight was chipping in for eagle from off the 17th green to take the lead for good.

“I like the way I finished that off,” said Koepka, who is now ranked 12th in the world after being No. 1 a year ago at this time. “Hit a lot of quality golf shots down the stretch. I haven’t been in contention in God knows how long, so to actually hit golf shots like I’m accustomed to seeing when the pressure is on. It’s a good feeling.

“I miss that pressure, I miss the atmosphere, the fans. I mean, my best results come with fans, so I’m excited to have them back.”

Tony Finau continues to put up a good front, but his inability to close out a tournament and get that long-awaited second pro victory has to be frustrating. Finau was tied with Dustin Johnson on the back nine of the Saudi International on Sunday and trailed by one with three holes to play — only to bogey the 16th and 17th holes. The first was the result of a three-putt after he hit a poor iron approach shot on a 180-yard hole. He ended up finishing two back and in a tie for second.

Finau now has 41 top-10 finishes worldwide since 2017 without a victory. Over his past 15 worldwide starts, he has six top 5s, including three straight in 2021.

Dustin Johnson breaks down his win at the Saudi International, making it his second victory in three seasons.

“I know how well I’m playing, I’ve just got to stay positive,” Finau said. “If I keep playing at a high level and give myself a chance to win, I just know it’s bound to happen.”

This week marks seven weeks since Tiger Woods‘ latest knee procedure, one that would appear to keep him out a minimum of 10-12 weeks. That timeline puts a potential, and optimistic, return at the Arnold Palmer Invitational in three weeks — or perhaps the following week at the Players Championship. The Honda Classic would make 12 weeks. Woods is expected to have some media availability during next week’s Genesis Invitational, which is run by his foundation. … Phil Mickelson spoke positively last week about a push to make the U.S. Open team but after a tie for 53rd at the Saudi International; he has dropped 20 spots this year in the world ranking to 86th. To be exempt for the U.S. Open, Mickelson needs to be in the top 60 in the spring. Last year, he had said he would not accept a special exemption if he did not earn his way into the tournament. But the U.S. Open is at Torrey Pines, in his hometown of San Diego. … One way to gain the respect of your Ryder Cup players? Beat them. U.S. captain Steve Stricker tied for fourth in Phoenix, and hit all 18 greens in regulation on Sunday. … Players said they noticed a difference with 5,000 fans in attendance at TPC Scottsdale. The number is expected to be double next month at the Arnold Palmer Invitational, as well as at the Players Championship and the Honda Classic.

Katie Price spared jail after breaching restraining order with ‘highly offensive and inflammatory’ text
Tech leaders react to Roe v. Wade reversal
Teenage Pulsar Reveals Itself to Astronomers, Possibly the Strongest Ever to Be Identified
Biden looking for ‘solutions’ after Supreme Court’s abortion ruling as protests continue
Brexit will leave workers poorer than they would have been and has damaged Britain’s competitiveness, new study says