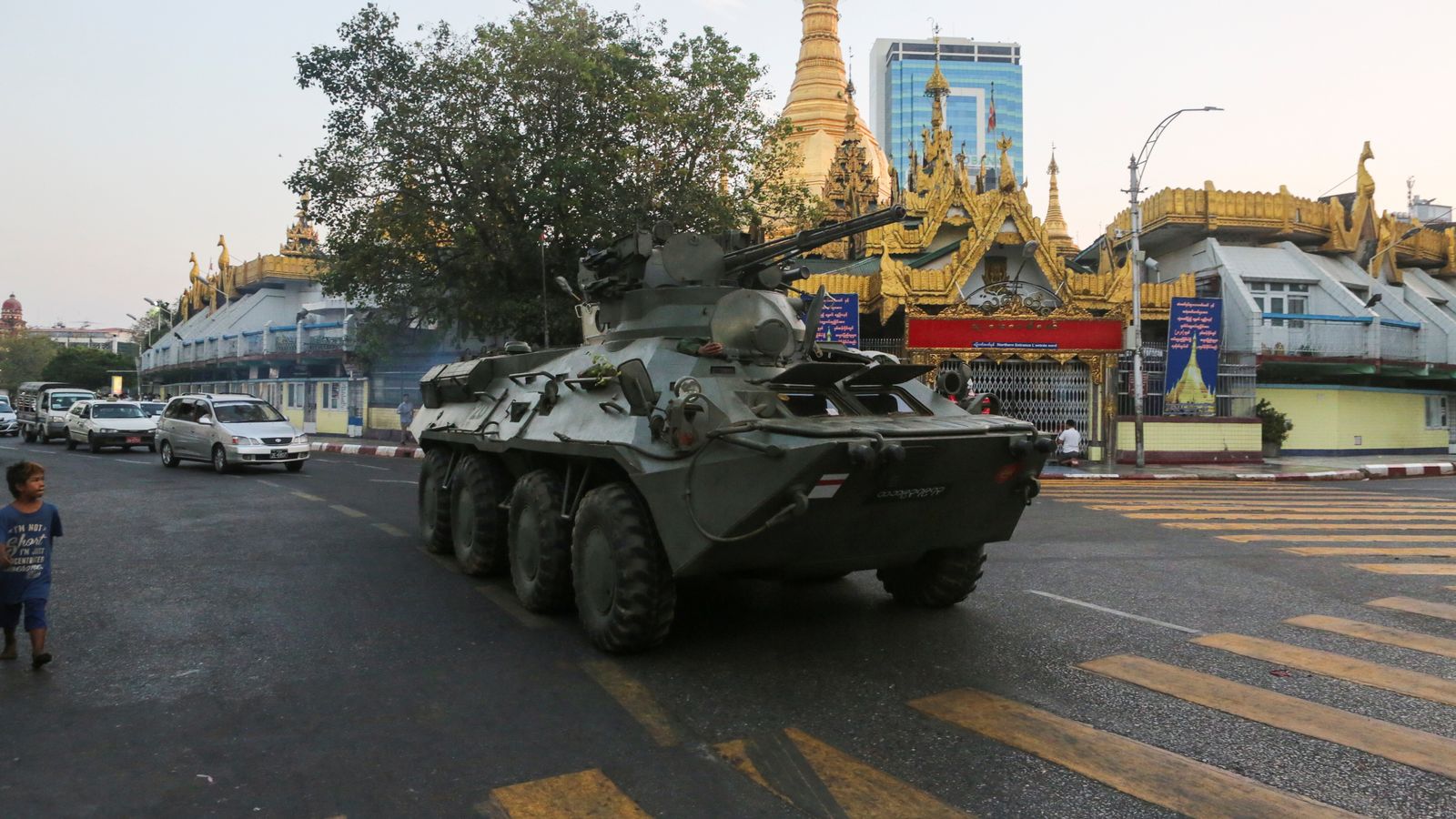 Tensions have risen in Myanmar following mass protests and speculation of an impending internet blackout.

Security forces opened fire on protesters at a power plant on Sunday and armoured vehicles rolled into major cities as the new army rulers faced a ninth day of anti-coup demonstrations.

Soldiers were deployed to power plants in the northern state of Kachin, leading to a confrontation with demonstrators, some of whom said they believed the army intended to cut off the electricity.

The security forces fired to disperse protesters outside one plant in Kachin’s state capital Myitkyina, footage broadcast live on Facebook showed, although it was not clear if they were using rubber bullets or live fire.

Meanwhile, vehicles appeared in protest hotspots in the commercial capital of Yangon, Myitkyina and Sittwe – the first large-scale rollout of military vehicles since the 1 February coup.

There was no official word as to why, but the US embassy in Myanmar urged American citizens to “shelter in place”, citing reports of the military movements in Yangon.

It also warned there was a possibility of an internet blackout overnight between 1am and 9am.

A statement signed by an array of foreign ambassadors in Myanmar said: “We call on security forces to refrain from violence against demonstrators and civilians who are protesting the overthrow of their legitimate government.”

It added: “We denounce the military’s interruption of communications as well as the restriction of Myanmar people’s fundamental rights and basic legal protections.”

Earlier on Sunday, engineering students marched through downtown Yangon wearing white and carrying placards demanding the release of ousted leader Aung San Suu Kyi, who has been in detention since the coup and charged with importing walkie-talkies.

Her detention is due to expire on Monday when a court will hear her case. Further demonstrations also took place in Mandalay and the capital Naypyitaw.

The law passed late on Saturday night requires people to report overnight visitors to their homes and allows security forces to detain suspects and search private property without court approval.

Eight days of street demonstrations are estimated to have drawn hundreds of thousands of people to the streets despite the threat of six months’ imprisonment for violating an order banning gatherings of five or more people. The same order imposes an 8pm to 4am curfew.

More than 384 people have been detained since the coup, the monitoring group Assistance Association for Political Prisoners said, in a wave of mostly nightly arrests.

As well as the mass protests across Myanmar, the country’s military rulers were faced with a strike by government workers, part of a civil disobedience movement to protest the coup.

Trains in parts of the country stopped running after staff refused to go to work, local media reported, while the military deployed soldiers to power plants where they were confronted by angry crowds.

The junta ordered civil servants to go back to work, threatening action.

Big technology stocks like Tesla, Amazon and Microsoft just finished their worst quarter in years
‘We don’t have to justify it’: Lily Allen speaks out about her abortion
Former Man City executive Tom Glick to take top Chelsea job
Airlines ‘to announce new wave of cancellations’, as Heathrow is like ‘disaster movie’ – and new strikes planned in Spain
Crew abandons sinking ship that snapped in half after being hit by deadly typhoon