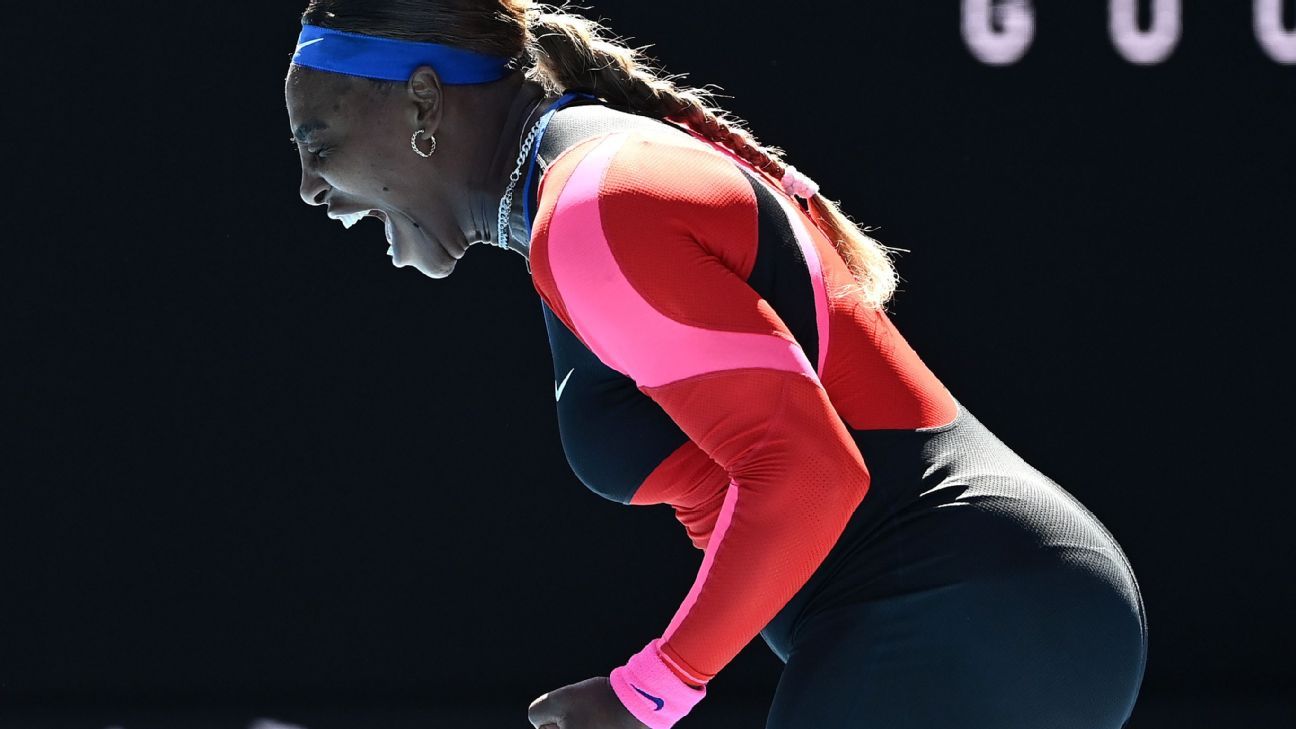 When the Tampa Bay Buccaneers and Tom Brady walloped the Kansas City Chiefs to earn Brady his seventh Super Bowl ring, it prompted a series of “Is Brady the GOAT of all GOATs?” conversations. Most of those greatest-of-all-time discussions ended, or should have, upon remembrance that Serena Williams exists.

Like Brady, Williams has the rings and the longevity. Her 23 Grand Slam titles are more than anyone else’s in the sport’s Open era — she even won the 2017 Australian Open while pregnant — and she has won at least one Slam in 14 different years.

But she has dominated at a consistent level that Brady and other GOAT of GOATs candidates struggle to match. While Brady was named the NFL’s most valuable player and named first-team All-Pro three times each, Williams has reached No. 1 in the WTA rankings in parts of 10 different years. At one point, she spent 186 consecutive weeks at No. 1.

To the extent that age has taken effect, both the 43-year-old Brady and the 39-year-old Williams have been forced to adapt their respective games. Williams faces Simona Halep on Tuesday (3 a.m. ET, ESPN2/ESPN App) in the 2021 Australian Open quarterfinals, and while she’s 9-2 all time against Halep and 6-0 on hard courts, she’s only 1-1 since her 2018 return to the tour. It’s worth discussing just how her game has changed and what new strengths and weaknesses have formed.

Williams’ career has been defined by steady quality combined with bursts of dominance. Most of her Grand Slam titles have come in such bursts — five titles in six Slams in 2002-03, five in eight from 2008 to ’10, four in six in 2012-13, then four in a row from 2014-15 — but between explosions and occasional injuries, she has still been a force, putting together a 0.794 win percentage in Slams she didn’t win, equivalent to a quarterfinal appearance like the one she has put together so far in Melbourne.

Since her return at the 2018 French Open, her Slam win percentage is 0.849. She has reached four finals and made the semifinals at last fall’s US Open. She remains a steady contender. If she does win her 24th Slam, it will be with a slightly different game.

To look at how Williams’ game has changed, we’ll once again lean on the data created by Tennis Abstract’s Match Charting Project, as we recently did in looking at Novak Djokovic‘s standout traits. Jeff Sackmann and a host of volunteers have charted more than 8,500 matches and 5 million points, creating layers of extra data about serves, returns, shot placement and tendencies and allowing us to get a much better idea about what makes certain players unique.

In this case, charting data can allow us to look at the same player over different periods of time.

The Charting Project has captured 209 Williams matches through the years, from her second-round loss to sister Venus Williams at the 1998 Australian Open to last week’s win over Laura Siegemund in the first round. While there is a larger sample of matches from the past decade or so, by separating Williams’ charted matches into three buckets — 1999 to 2011, 2012-17 (her most concentrated run of dominance) and 2018-present — we can take note of what has changed through the years.

Let’s start with the serve

Williams’ serve has always been one of her biggest strengths, and during her 2012-17 run, in which she won 10 Slams, three WTA Finals and 12 1,000-level events, it was otherworldly.

These days, it’s merely awesome. She appears to have taken a little bit of sting out of it in the name of better accuracy.

Serena’s serve, by the numbers

Over the 52 weeks before the Australian Open, across all matches (not only those charted), Williams’ serve remained a force, ranking first among the WTA’s top-60 players with a 12% ace percentage (Naomi Osaka was second at 9%) and second behind Osaka in first-serve win percentage (74%). She ranked a mortal 18th in second-serve win percentage (49%), however.

As seen above, Williams’ second serve has never been a particular strength. Even in the most dominant point of her career, her second-serve win percentage was slightly under 50% in charted matches. And these stats have played out in similar fashion through four matches in Melbourne: She has recorded aces 11% of the time, and her first-serve win percentage is a stellar 80%, but she has won only 43% of her second-serve points, 37% in her last two matches.

Her first serve was particularly wayward when she dropped a 6-2 set to Aryna Sabalenka in the fourth round — she landed just 12 of 33 first serves (36%) and won just five of 21 second-serve points (24%). If her first serve isn’t accurate, things could become dicey against Halep, who headed into the Australian Open ranked fourth in win percentage on second-serve return points (61%).

It might do Williams some good to break tendencies against Halep, who broke her four times in their last meeting, a straight-sets romp in the 2019 Wimbledon final. You typically know where Williams is going to serve:

These tendencies have shifted a bit in recent times, particularly on the second serve — she used to vary her deuce court serves a lot more while going wide on ad courts more frequently — but she has always held clear tendencies. It works out most of the time, but Halep is an elite returner against both first and second serve. She broke Williams three times in their 2019 Australian Open encounter, too.

Of course, Williams broke five times in that match and won in three sets.

Her returns are getting deeper

Williams doesn’t dominate quite as many points as she used to, but she has figured out new ways to establish potential control anyway. This is most evident in return data.

Sackmann’s charts log return depth as either shallow (inside the service line), deep (beyond the service line) or very deep (closer to the baseline than the service line). Since 1999, 29.5% of all returns in play have been logged as “very deep,” and while Williams used to focus more on power than depth (only 22% of her returns were “very deep” in the 1999-2011 sample), that percentage has risen to 32% since 2018. She lands her forehand in this range 34% of the time, and against Siegemund she was very deep on 39% of her returns.

Granted, hitting outright winners trumps everything. She won 42% of first-serve return points in the 2012-17 charting sample, and that average has been only 35% since 2018. In all matches in the 52 weeks before the Australian Open, she won only 43% of all return points (31st among top-60 players), 34% against first serves (52nd).

Her return has been a revelation in Melbourne, however: she has won 50% of return points, 46% against first serves. She has broken 19 times in four matches, winning 54% of break points.

It’s hard to generate offense against depth, and while Williams doesn’t hit as many winners these days, she does force more errors:

Infosys, which provides data for the Australian Open, logs rallies slightly differently, but she’s winning 59% of rallies lasting between 0-4 shots and 51% of those thereafter. Her ability to defend and hit with depth allowed her to buy time against Sabalenka while her serve was struggling, and it could serve her well moving forward, too, not only at the Australian Open but throughout 2021.

Williams has overachieved projections thus far at the Australian Open; Tennis Abstract’s ELO rankings marked Sabalenka as a solid favorite in their fourth-round matchup, just as they favor Halep (67% win probability) in the quarters. Caesars by William Hill, on the other hand, sets Williams’ betting odds at -140, equivalent to a 58% chance of victory.

Odds haven’t always applied to Williams’ career, though. She has won 10 Slams since her 30th birthday — Steffi Graf, Chris Evert and Martina Navratilova combined for five such titles in their 30s — and she’s still playing at a top-10 level just seven months from her 40s. And if she continues to return and defend as she has in Australia, she will remain a contender for Slam No. 24 throughout 2021.

Bobby Bonilla Day explained: Why the Mets still pay him $1.19M every July 1
‘We don’t have to justify it’: Lily Allen speaks out about her abortion
Why one stock brokerage is bullish on Reliance Industries and Infosys
Zika and Dengue Viruses Can Alter a Hosts Smell to Make It ‘Tastier’, Attract More Mosquitoes, Study Says
White House aide’s astonishing testimony may help January 6th committee resonate with the public