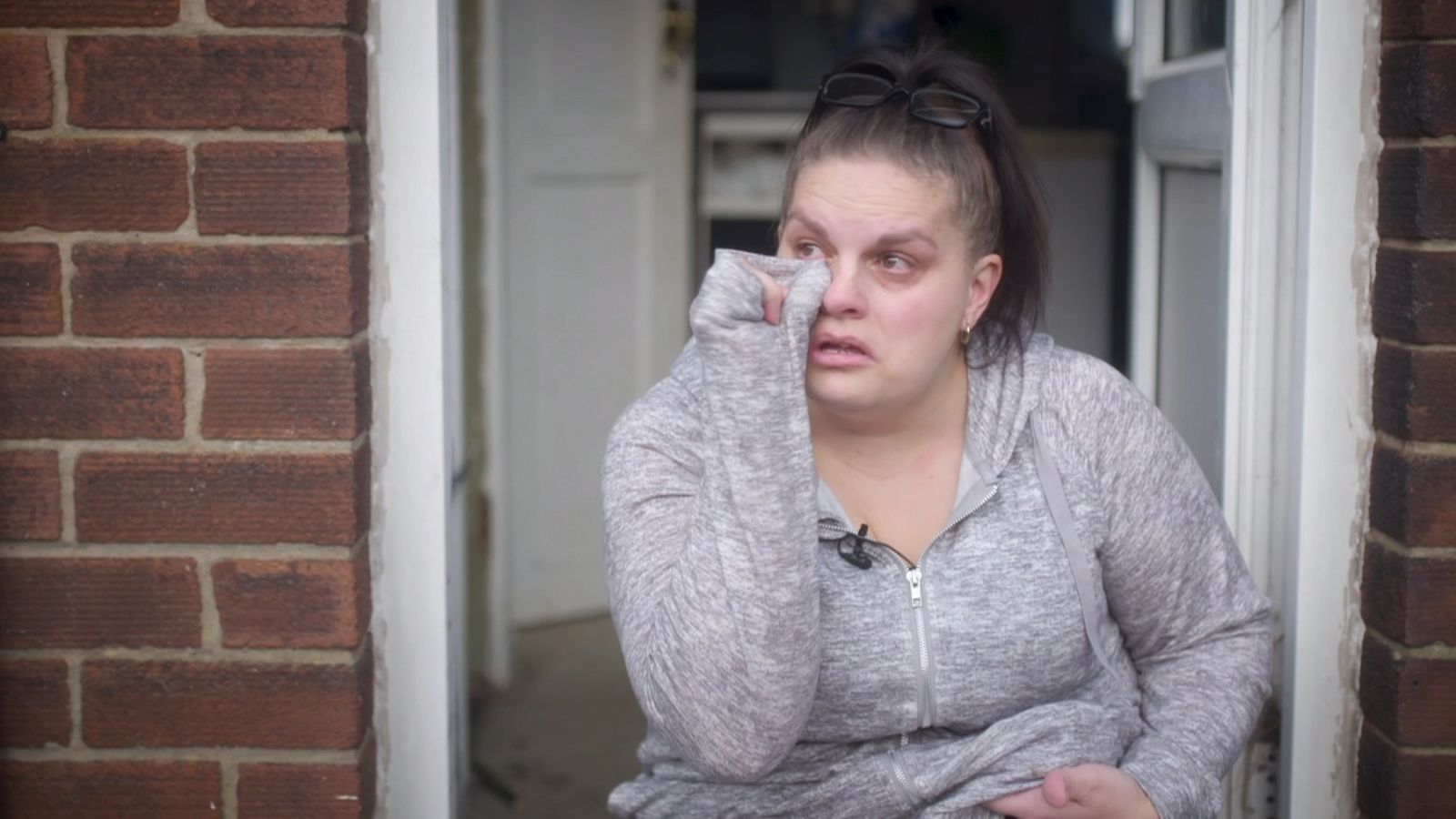 It’s a Friday evening on Oldham’s Eldon Street Estate, one of the poorest neighbourhoods in town.

A car pulls into the car park.

Some women are chatting in one of the stairwells in the flats opposite and they suddenly stop to look at the car.

A few other residents emerge from their flats and peer over the balcony to see what is going on.

The driver of the car gets out and opens the boot. She pulls out a decorating table and starts to unpack, neatly arranging the contents as if she’s setting up for a car boot sale. But this is no car boot sale.

Bread, bananas, apples, cakes. A few cartons of milk. Some bars of chocolate. Tins of beans. Pasta. Soup. She’s laying them all out on the table.

For the past few weeks, Kay Astley has come here to hand out free food because she says many of the households on this estate cannot afford to eat.

“People who are working, after they’ve paid their bills, they’ve got nothing. So they do without,” she said.

“The pandemic has made so many people so much poorer.”

Residents start walking over to the car. An elderly lady brings a shopping bag. A man dressed in a heavy winter coat asks: “Is this for us?”

Laura Calder has just moved to this estate and has come to see what’s going on.

This time last year she had a steady job working in an office. But at the beginning of the pandemic, she was made redundant.

“I found myself on Universal Credit and it’s bloody tough,” she said. 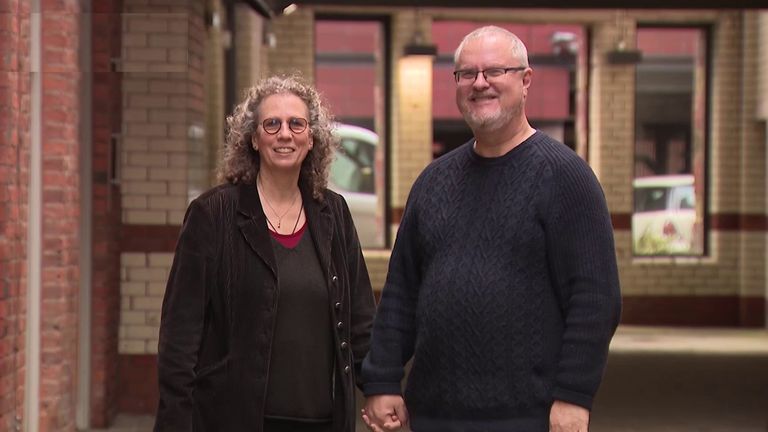 Joy at being vaccinated, but some feel left out

“I’ve worked in offices all my life but now I’m trying to get a job in Tesco. Not having much luck.”

For the first time in her life, she hasn’t got enough money to live, she says.

“The first time I went to a food bank, I was really embarrassed. I had my head down in shame. But then I realised so many other people are in the same position.”

Oldham was once the most productive cotton mill town in the world. Now home to a hundred thousand people, it is one of the most deprived towns in the UK.

One in three children live in absolute poverty and the pandemic has exposed a lot of the town’s deep-rooted inequalities, like poor health, lack of job opportunities and housing.

Jessica Degnan is a mum of three boys and is trying to juggle home-schooling with paying the bills. But being stuck at home is expensive and she is struggling to feed McKenzie, 13, Coby, 4, and Freddie aged 3.

“This week has been really hard because I’ve not been sleeping and things just going on in my mind.

“Sometimes I just sit there and my mind ticks over constantly. How will I pay for the shopping or if the kids need anything? Things just go off in my mind. This week, I’ve never felt so alone in my life.

Jessica is on Universal Credit. Since the beginning of the pandemic, the number of people claiming has soared from 3 million in March 2020 to 5.8 million in November 2020, according to the Department for Work and Pensions.

To help struggling families, the government increased payments by £20-a-week, but that is due to be taken away in April, meaning thousands of families could fall deeper into crisis.

At the local library, they haven’t loaned a single book for nearly a year now. Instead, it is a crisis centre run by a charity called Reel, set up by two local women, Charlene Burns and Kim Rogers. 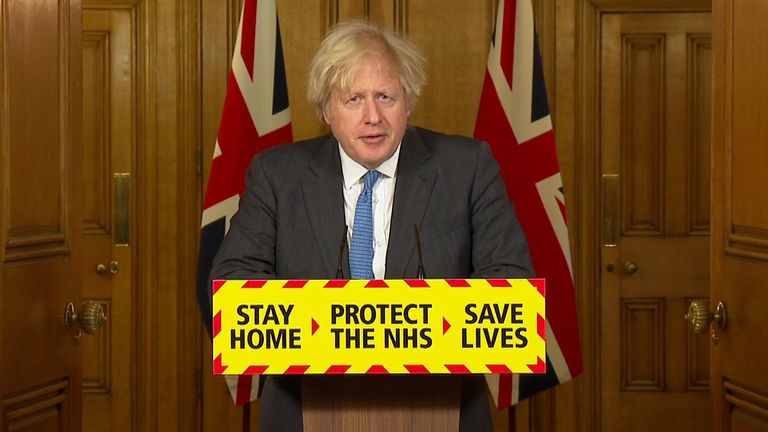 ‘We want this lockdown to be the last’

Here people in need can collect food and baby clothes which have been donated by the local community.

“The pandemic has affected people massively. People are struggling to put bread and butter on the table,” said Charlene.

“But they have been struggling for a long time now. The pandemic has blown that open in a big way. Which is why it is so important that we come up with a recovery plan that makes sure people aren’t going to be worse off after this pandemic than they were going into it.”

There are food banks all over this town, a sign that demand has continued to rise.

At the European Islamic Centre in the centre of Oldham, a food bank has been set up. Osman Rowe volunteers here a couple of days a week.

“You can tell they’re a bit ashamed when they come in. They’re a bit afraid. But they’ve come to their wit’s end. So, you know, we give them some food.

“This epidemic is brought everything to the fore.

“I think it’s in a funny sort of way, it’s been a big eye-opener and a big leveller. To let us know where we are as a society. And I think the government have a hell of a job on their hands when it comes to figuring out how we get out of this mess.”

For a lot of people here, life in lockdown has been out of sight. Around 5,000 households live in overcrowded conditions, according to Oldham council.

In one house, we meet four generations of the same family. It’s a small, terraced house which is too small for this many people. There are at least two double beds in each of the three bedrooms and only a small kitchen and living room downstairs.

The family business collapsed during the lockdown and while the family wanted to talk about their experiences, they did not want to be identified.

Sajid, aged 18, not his real name, said the children here have not been to school since March and they had hardly done any home schooling.

“Because of the lockdown, it’s hard for us to make money. All the kids do is stay at home, locked up. It’s proper hard. They’re not learning much because our home is not the right environment for them. It’s much harder for them to learn. And they are losing out on a lot of information. No one realises how hard it is for families like ours.”

This family is not an isolated case, says Councillor Abdul Jabbar, deputy leader of Oldham Council.

“I think it’s an example of many families in Oldham who have been severely impacted by COVID-19.

“Their income has gone down dramatically, they are overcrowded, the kids are suffering because they’re not able to go to school and this is having a detrimental effect on their mental health and general wellbeing.

“When we talk about a recovery, we have to take all these issues into account.

“The government has given councils like ours money to cope with the pandemic. That is welcome. But they’re not giving us enough money. And that’s a problem for the future when we search for a way out of this.

Weird Alibaba: You can literally buy a 10 ft. long rideable electric dinosaur
New Western measures aim to turn up the heat on Putin’s oil revenues. Analysts are underwhelmed
Westminster’s ‘nepo babies’ are here to stay – whether we like it or not | Adam Boulton
Dances With Wolves actor ‘trained wives how to use guns if police tried to break up family’
Police release image of new witness they want to speak to after disappearance of Nicola Bulley