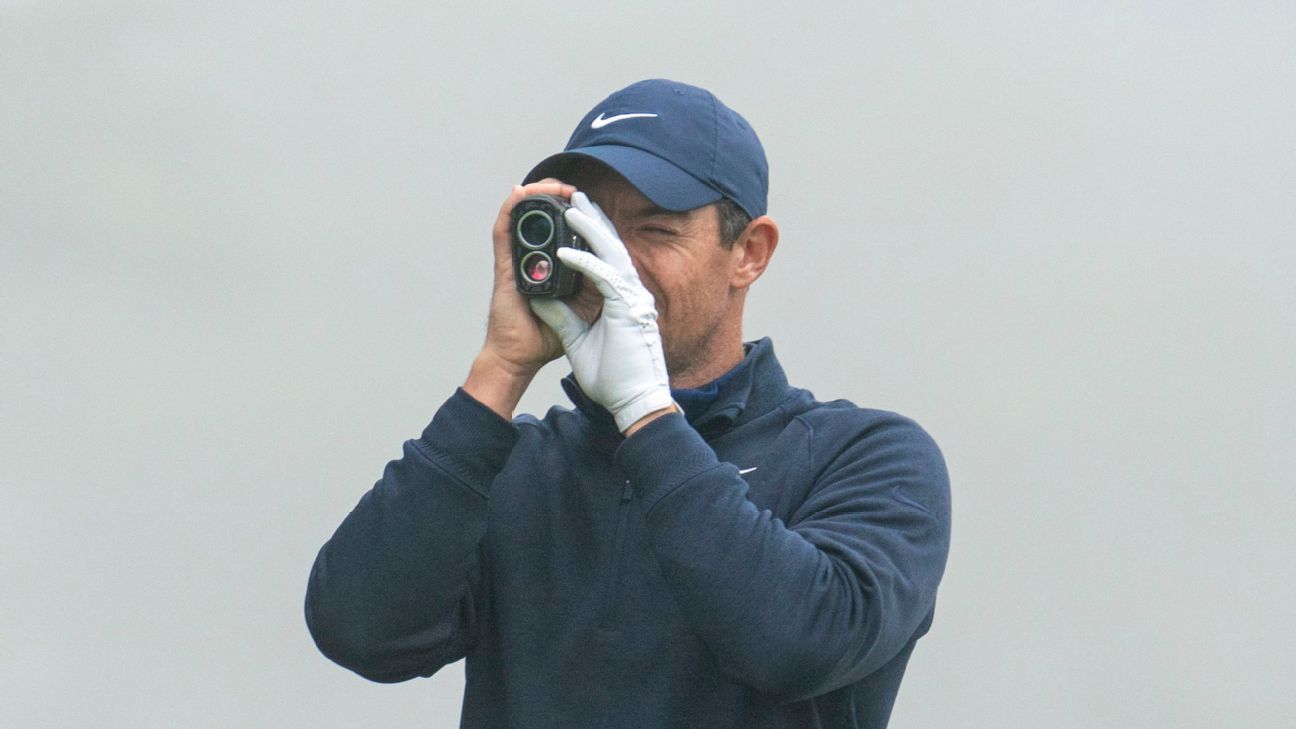 The mere mortals among us who slap it around a golf course while looking for some idea as to how far we need to hit a shot to the green have embraced the use of distance-measuring device for years.

Golf’s governing bodies made them legal back in 2014, which meant those who wanted to adhere to the letter of the law could use range finders, post scores for handicaps and play with them in various amateur events.

But a local rule was also attached, allowing any tournament committee to ban their use in that competition. Hence, they’ve never been allowed on the various professional tours and at the major championships.

The PGA of America last week stepped outside of that box, announcing that it would allow the devices in its three major championships: the PGA Championship, the KPMG Women’s PGA and the Kitchen Aid Senior PGA. President Jim Richerson noted how the organization is hoping to “improve the flow of play” by allowing players easy access to yardages obtained by aiming the device at a flagstick and quickly getting a number.

This came as a surprise to those involved in the highest levels of the game.

“It’s so frustrating that they never asked the ones who know the best what we think,” said veteran caddie Paul Tesori, who works for Webb Simpson. “I truly don’t believe it’ll speed up play one minute.

“On a normal hole, I’ll still have the front [of the green] number, carry number, how many left or right and how many yards behind the pin. The last number we would get is the pin. What happens then if the range finder is more than 1 yard off? Now we will have to redo all our other numbers to fit what we are trying to do with the shot.”

Said one longtime caddie who didn’t want to be identified: “I’m 100 percent against it. I think at the PGA Championship level, the optics are bad. In my opinion, it will enable the caddies that don’t prepare as well as some others the ability to catch up.

“I also think at that level it won’t speed up the game much, if at all. Most guys want multiple numbers.”

Using distance-measuring devices makes sense at other levels of play, especially where caddies are not required or utilized. The U.S. Amateur, for example, allows them. But not the U.S. Open. In fact, no major professional tour or major championship is allowing the devices, with the PGA of America breaking from that.

Another longtime caddie, Kip Henley, said the only real benefit would come in rare instances, such as at the 2017 Open, when Jordan Spieth was so off line after a tee shot at Royal Birkdale’s 13th hole that getting an exact yardage was guesswork.

“That was a damn great one [by Spieth’s caddie Michael Greller], but 30 caddies would have had 30 different numbers on that shot,” Henley said. “I understand it will speed the game up on shots like that, but only minimally. From the fairway, the player will still want the front numbers and the laser won’t give you those. … It’s a huge mistake, in my eyes.”

The odd thing about the decision is it was hardly a front-burner topic. Nobody was clamoring for it. And while the PGA of America and PGA Tour have improved their relationship in recent years and worked together in many ways, the latter is not planning on eschewing the local rule anytime soon.

In 2017, the tour tested the devices at four Korn Ferry events.

“We decided at the time to continue to prohibit their use in official competitions on the PGA Tour, the PGA Tour Champions and Korn Ferry Tour for the foreseeable future,” the tour said in a statement. “We will evaluate the impact rangefinders have on the competition at the PGA of America’s championships in 2021 and will then review the matter with our player directors and the Player Advisory Council.”

You can bet you will not see the devices at Augusta National for the Masters, either.

The PGA, however, is an example of how there is the potential for differing ways rules are applied at various tournaments. Already, it is the only organization that is seemingly willing to allow “preferred lies” (lift, clean and place) during its championships. It does not invoke the “one-ball” rule seen at all levels of the pro game. (The “one-ball” rule is states players can only use a specific brand and model ball for an entire round). This is just another example.

One theory: the PGA of America represents more than 28,000 clubs professionals across the country. In addition to teaching the game, they also run golf shops and sell equipment. Perhaps this is a way to get the distance devices some love with the public. People might be moved to buy the product if they see the best in the world using it.

Since learning in early January that Tiger Woods had a fourth microdiscectomy (on Dec. 23) and also finding out that he was already hitting balls, there’s been little information about his status. Woods has offered no public updates and it appears he will not have any media availability this week at the Genesis Invitational, the tournament he hosts and where he might be on site for the weekend.

Woods dropped to 48th in the world this week, meaning he is eligible for next week’s WGC at The Concession — which appear to be too soon for his return. This week marks eight weeks since the surgery. The Arnold Palmer Invitational would also be in question, although it’s possible. So it now becomes a waiting game each week to see if he returns. Arnold Palmer? Players? Honda? WGC-Match Play? The latter is 13 weeks past the procedure and a place where at the very least he could get in three rounds — because of the format — two weeks prior to the Masters.

Jordan Spieth has again been part of the weekend discussion lately; he’s had 54-hole leads in Phoenix and Pebble Beach. While he was unable to add his 12th PGA Tour victory at either place — he finished T-4 at Waste Management Phoenix Open and T-3 at the AT&T Pebble Beach Pro-Am — the fact he was there with a chance has to be encouraging to a player who has endured so much of golf’s wrath over the past three-plus years.

Still, Spieth’s inability to get the ball in play off the tee — and some cold stretches with the putter — continues to doom him. The driver is especially troublesome, as we saw on Sunday when he hit just six fairways at Pebble Beach. A couple of late birdies helped him shoot 2-under-par 70, but he had damaged his chances with bogeys at the par-5 sixth and the par-5 14th. For the weekend, Spieth made a bogey on four par 5s — and lost by 3 strokes.

As you might expect, Spieth is taking plenty of positives from the past two weeks.

“If I look back at Friday night of San Diego and you tell me I was going to share the 54-hole lead and have the 54-hole lead two weeks in a row and just really fight strong both weeks, I would have said you’re crazy, to be honest,” Spieth said. “I was not in a great headspace following that missed cut there [at the Farmers Insurance Open] and just did some really phenomenal work from Sunday through Wednesday of last week that was probably the best period of a few days of work that I’ve put in in a long time. It just got me believing in what I was doing and progressing forward.”

With his victory at Pebble Beach, Daniel Berger became the fifth player to win multiple times since the COVID-19 break. Berger won the first event back, the Charles Schwab Challenge, in June. Dustin Johnson (Travelers, Northern Trust, Tour Championship, Masters) Jon Rahm (Memorial, BMW Championship), Bryson DeChambeau (Rocket Mortgage, U.S. Open) and Collin Morikawa (Workday Charity Open, PGA Championship) are the others. … Berger has shot 26 consecutive rounds of par or better, the longest streak on the PGA Tour. … Since Spieth last won at the 2017 Open, Justin Thomas has nine wins, Johnson had eight, Brooks Koepka six, DeChambeau six and Rory McIlroy five. … Woods, who was not even hitting balls because of injuries at the time of Spieth’s Open win, has three victories since. … Spieth is now 62nd in the world and can still make next week’s WGC at The Concession if he can jump into the top 50 by Monday — although the event will go beyond the top 50 to fill the field to 72 players.

More than 13,000 Nigerian residents take Shell to court over oil spills
Sunak urged to ‘come clean’ over what he knew about Zahawi tax scandal
Simpsons episode where Homer goes on strike shown by Channel 4 on ‘Walkout Wednesday’
Westminster’s ‘nepo babies’ are here to stay – whether we like it or not | Adam Boulton
Keanu Reeves ‘alarmed and distressed’ by alleged trespasser who ‘slept in his garden’