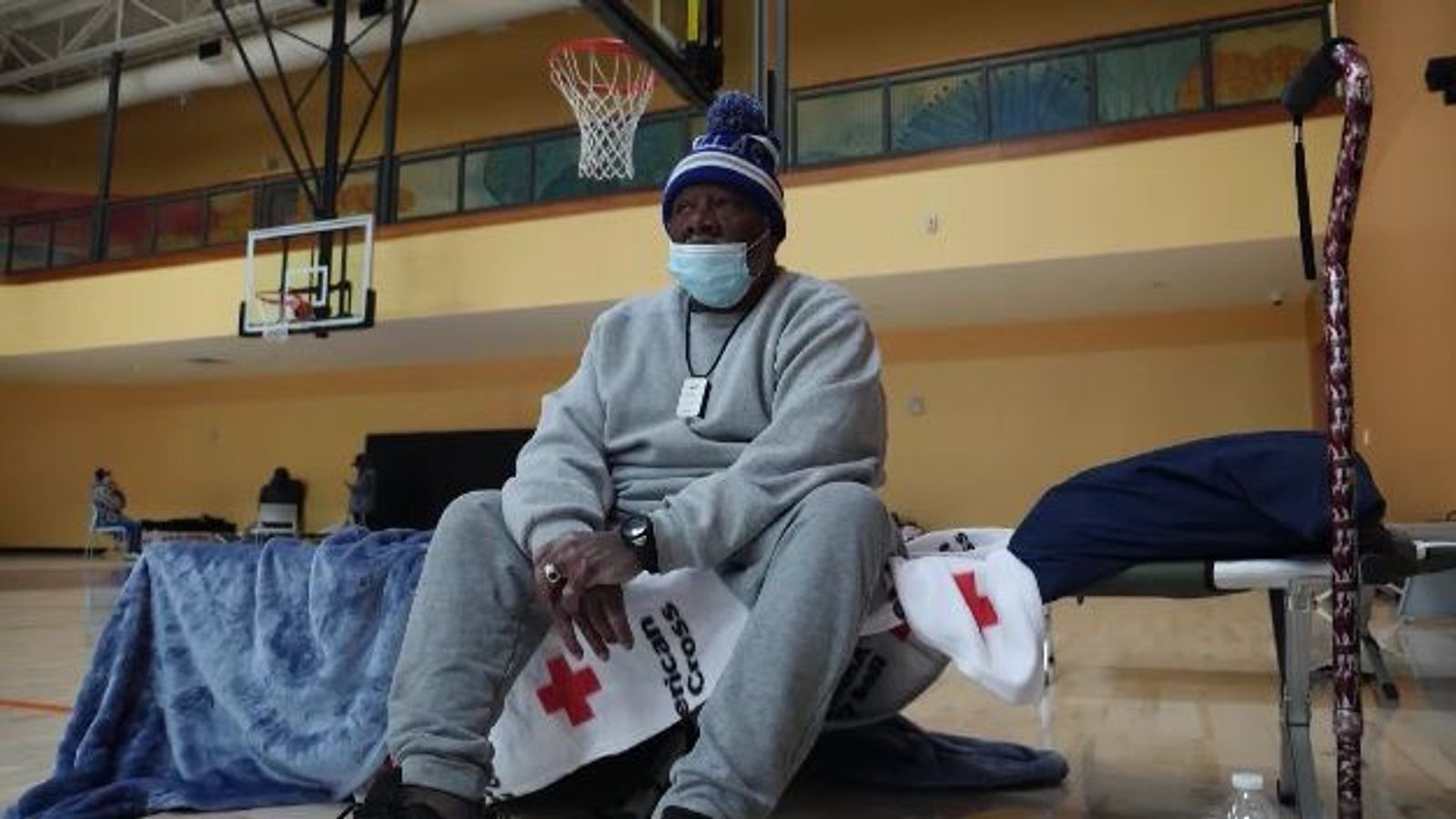 Sitting on a chair, on his own, Charles Burns looks exhausted.

He has a big, woolly hat on, emblazoned with the word DALLAS, and he’s wrapped up for the cold. But his shoulders are hunched and his eyes are glazed. Smiling takes effort.

He is taking refuge at a so-called warming shelter in the town of Grapevine in Texas. In reality, it’s a leisure centre kitted out with camp beds, Red Cross blankets, food, drink, and volunteers. It’s safe, warm and welcoming. And it’s where Charles came to seek refuge.

The day before, with temperatures plunging, his electricity supply had turned off and his heating stopped warming. The windows in his apartment are poorly insulated and the heat leaked out. It was, he estimates, not far off freezing point in his apartment.

“I think I did the right thing, coming here to the shelter, because otherwise…” His voice trails off.

“Do you worry you would have died at home?” I asked.

And Charles nods, slowly and sadly. “I probably would have. It was pretty rough. Pretty rough.”

Around him are plenty of others. A man sleeps on one of the beds, his small dog curled up next to him. Myles and his wife are reading books, after a night sleeping in the shelter, and wondering about their next move. An hour later I see him preparing their car to leave – they’ve decided to head south and look for a hotel that might have a room free.

These shelters are not full of homeless, or desperately vulnerable people. Many of the people I met were comfortably-off, middle-income Americans with a big car and a nice house. But they have found themselves completely helpless in the face of the extreme weather that Texas has thrown at them. Their homes are freezing cold and they have nowhere else to go.

I spoke to Cherie and her daughter Zoe, who had spent the night in the shelter but who now had a hotel room to go to. They had nothing but praise for the volunteers but were also pleased that they would be going somewhere warm, and private, that night.

There have been deaths and injuries already, from road accidents, from falls on the ice and also from a growing number of people who have succumbed to carbon monoxide poisoning while trying to warm themselves in a car. Sadly, there may be other fatalities that we simply don’t know about yet – people who have died, alone, due to the cold.

In Grapevine, the people I spoke to were, without exception, polite. Almost all of them were slightly bewildered about the weather; a few were annoyed that problems had not been foreseen. But others felt this was a freak event – the sort of thing that nobody could have predicted.

“I’ve lived in Texas all my life and I’ve never seen anything like this,” Roberto Murillo told me. The construction worker had come to the warming shelter after finding his apartment unbearable.

Addison Carey, unassuming and patient, told me he had moved to Texas after losing his home in New Orleans, following the ravages of Hurricane Katrina. He’d tried sleeping in his car, given up and driven to the shelter instead. Now his car lock had frozen so he couldn’t drive home again. “It was so darn cold,” he said, with a smile.

Belinda was there with her husband, Paul, and their dog, Max. As we spoke, she finally got through to a local hotel, desperate for a reservation. They told her they were fully booked, with no waiting list and no prospect of a cancellation. Disappointment was etched on her face as she ended the call: “I’m trying to stay upbeat; it’s all an experience.” In the absence of a hotel room, her husband suspected they would be sleeping in the shelter until the end of the week.

This shelter, and others like it across Texas, is about a curious form of unplanned camaraderie. But it is also a picture of the fragility of modern society.

Texas isn’t at war; it’s not under attack. But a sudden bout of Arctic weather, leading to bone-chilling coldness, treacherous roads and electricity blackouts, has caused an amount of chaos.