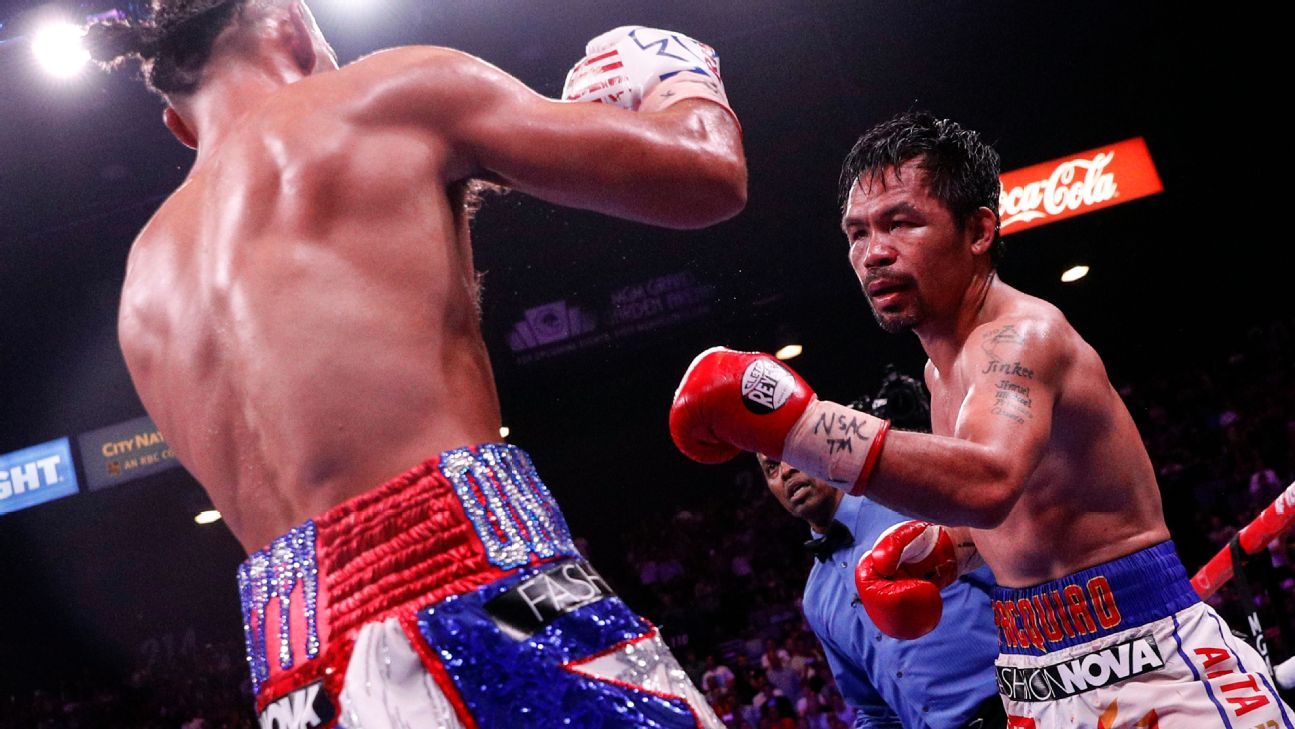 With the clock ticking down on the legendary career of 42-year-old Manny Pacquiao, the choice of his next opponent will be an interesting one. Do belts matter for a fighter who has won world titles in eight weight classes? Or is it more about cashing the biggest checks possible against the highest-profile opponent?

Pacquiao (62-7-3, 39 KOs) wants to squeeze in two fights before he launches his highly presumed bid to become President of the Philippines later this year. The first fight is being targeted for the last week of April or first week of May. It would be Pacquiao’s first since July 2019, when he beat Keith Thurman via split decision for the WBA world welterweight title.

Pacquiao’s Hall of Fame-worthy legacy is already secure, so who fits the bill for this last stage of his career?

Pacquiao was named WBA “champion in recess” recently, which has taken away one of his points of leverage in terms of facing one of the other world title holders at 147 pounds, as it eliminates the possibility of a unification bout.

With Cuba’s Yordenis Ugas now holding the WBA title, IBF-WBC champion Spence is more likely to be tempted by the opportunity to win a third belt than by facing Pacquiao.

Ugas, Spence and Pacquiao are all under the Premier Boxing Champions (PBC) banner, so either fight is a possibility, and Spence is an attractive option for Pac Man. Pacquiao wants a big payday, as his days at the top level of boxing are numbered, and there would be plenty of interest in a clash with Spence. But the Texas boxer, a world champion since 2019, appears more likely to pursue Ugas after they recently exchanged tweets on the matter.

This is the biggest fight out there for Pacquiao, in terms of prestige. Crawford is ESPN’s pound-for-pound No. 1, and Pacquiao reportedly believes that fight would be worth $40 million to him, according to comments he made to the Daily Tribune in the Philippines. But that seems unrealistic considering limitations on gate revenue due to current COVID-related restrictions on crowd size.

WBO world welterweight champion Crawford, 33, put Pacquiao top of his list after his last win, a knockout of former champion Kell Brook in November, and Top Rank promoter Bob Arum said the Middle East was a potential venue. But that fight has not developed and Crawford has most recently been linked to Vergil Ortiz Jr. In my estimation, Spence is a likelier fight for Pacquiao than Crawford.

Boxing’s latest young prodigy declared his interest in fighting Pacquiao, who is 20 years his senior, when he shared a mock-up of a fight poster featuring the two to his 8.5 million Instagram followers last month.

But don’t believe the hype. Golden Boy Promotions president Eric Gomez told ESPN Knockout “that fight isn’t going to happen.” He said: “They contacted us, but it turns out there’s nothing to talk about.”

Los Angeles-based Garcia, who impressively defeated Luke Campbell by knockout on Jan. 2, is instead being linked to a bout against Javier Fortuna, with a date against undisputed world lightweight champion Teofimo Lopez on deck.

If a Garcia fights Pacquiao next, it is more likely to be Mikey, who, like Pacquiao, is under the Premier Boxing Champions banner.

Garcia, 33, from California, is the same height as Pacquiao — 5-foot-6 — and a less formidable opponent than Spence or Crawford. Garcia has won world titles in four weight classes but started winning belts at featherweight as opposed to lightweight, where Crawford first became world champion.

Garcia made an unimpressive debut at welterweight against Spence two years ago before an improved performance and unanimous decision win over Jesse Vargas a year ago. The fact that Garcia has yet to establish himself as a force at welterweight, as well as the ease of making the fight in-house with PBC, makes Mikey a strong contender to face Pac Man first in 2021.

The former two-division UFC champion has been scratched off the list of possible opponents for Pacquiao’s next fight after his UFC 257 defeat at the hands of Dustin Poirier. McGregor had said talks were intensifying for a Pacquiao bout before his Jan. 23 loss, but McGregor’s next move is now likely to be a rematch and trilogy meeting with Poirer.

McGregor is an attractive and lucrative fight for Pacquiao — but it won’t be his next one. Pacquiao must hope there is still life in the fight — and time to make it happen — down the road. Management company Paradigm Sports has McGregor and Pacquiao both on its roster, so don’t write that fight off just yet. It has crossover appeal, and the potential to generate more money than anyone else on this list.

Flights cancelled from Heathrow due to ‘higher passenger numbers than airport can serve’
Bitcoin just had its worst month in more than a year
Tesla delivered 254,695 electric vehicles in the second quarter of 2022
NASA Launches ‘Mini Hubble’ Telescope From Australian Outback
‘Glastonbury visited me’: Coldplay’s Chris Martin surprises bargoers with performance at pub