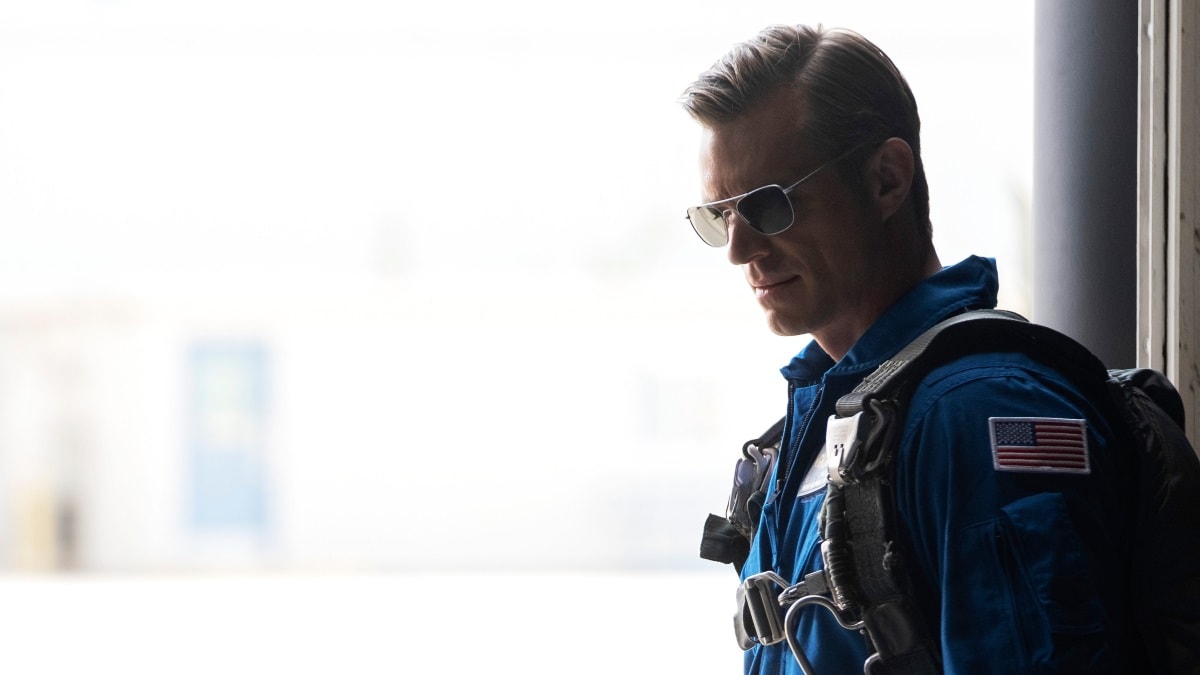 For All Mankind season 2 — premiering February 19 on Apple TV+ worldwide — continues to explore the ripple effects of the Soviets putting a man (and a woman) on the Moon before the Americans. In some ways, it created a better, equitable world in the USA. Women enjoy a better position at NASA (in spacesuits and in the boardroom) and in society (the Equal Rights Amendment actually got ratified), though the same can’t be said about race relations. And as the For All Mankind season 1 post-credits scene revealed, NASA’s Sea Dragon dream — a two-stage rocket conceptualised in the ‘60s as the pathway to manned Mars missions before funding was scrapped — has come to life. That moment comes midway through season 2, which picks up nine years from where we left off.

Set in the summer of 1983, For All Mankind season 2 reveals that the never-ending Space Race between USA and USSR has brought about technological innovations earlier than we got it. They have email, except it’s called “d-mail”, and electric cars albeit with the same problems: range and speed. And John Lennon is still alive — he was assassinated in 1980 — and Prince Charles got his desire: to marry Camilla Parker-Bowles rather than Diana Spencer. While some events are a logical leap, others just seem like the For All Mankind writers having fun with the alt-history world they inhabit. Speaking of getting things earlier, USA is involved in a coup in Panama — it occurred in 1989 in our world — which here contributes to Cold War tensions.

While the Soviets had largely been a faceless adversary in For All Mankind season 1 — save for that astronaut, excuse me cosmonaut, who Ed Baldwin (Joel Kinnaman) spent some quality time with — they have an expanded presence on For All Mankind season 2. That’s mostly due to a PR stunt devised by the Americans (space aficionados will know what I’m referring to), and additionally, the militarisation of space — one that the For All Mankind season 2 marketing, from trailers to posters, have done their best at highlighting. But the writers, led by For All Mankind creators Ronald D. Moore, Matt Wolpert, and Ben Nedivi, can’t seem to decide how they view American aggression, foolhardiness, and language skills (or rather, the lack of them).

Early into the first episode of For All Mankind season 2, astronaut Gordo Stevens (Michael Dorman), who’s taken up a side gig as a speaker, jokes that on the Moon, Americans are to Soviets how the settlers (English colonists) were to the Indians (that’s Native Americans). It gets him many laughs but that’s a telling comparison, given the barbaric nature of what happened in history. But then, in a later episode following the KAL007 tragedy, when US Marines wielding guns show up to reclaim their mining site on the Moon, it’s backgrounded to the tunes of The Clash’s “I Fought the Law”. It’s setting a dangerous precedent, as the events that follow on For All Mankind season 2 confirm.

On one level, For All Mankind seems interested in exploring the ugly and bloody legacy of post-World War II USA, one that has been involved in countless wars across decades. What it feels like it’s trying to get at is that the Americans’ tendency for a show of force will inevitably lead them into armed conflicts on the Moon as well — doomed to repeat cycles of violence, no matter what timeline they are in. But the messaging on For All Mankind season 2 is a bit muddled, almost as if it’s afraid of alienating its primary audience: Americans.

Of course, what it always has been better at doing is examining the toll the Space Race takes on personal relationships. To help in that regard, For All Mankind season 2 brings in a couple of new directors in Andrew Stanton (the Pixar veteran known for Finding Nemo and WALL-E) alongside Michael Morris (who was behind two episodes in Better Call Saul season 5). Admittedly, For All Mankind can be borderline soapy at times, and feel like one of those “X-hour movie as a TV show” annoyances. (There are 10 hourlong episodes here, with a couple touching 70 minutes or going over.) But that DNA also makes it engaging elsewhere, with some thrilling sequences towards the end of For All Mankind season 2 reminiscent of the addictive power of Moore’s Battlestar Galactica.

The Apple TV+ series is short on laughs though. Across the 10-episode run — I’ve seen them all — I recall chuckling to myself only a couple of times. 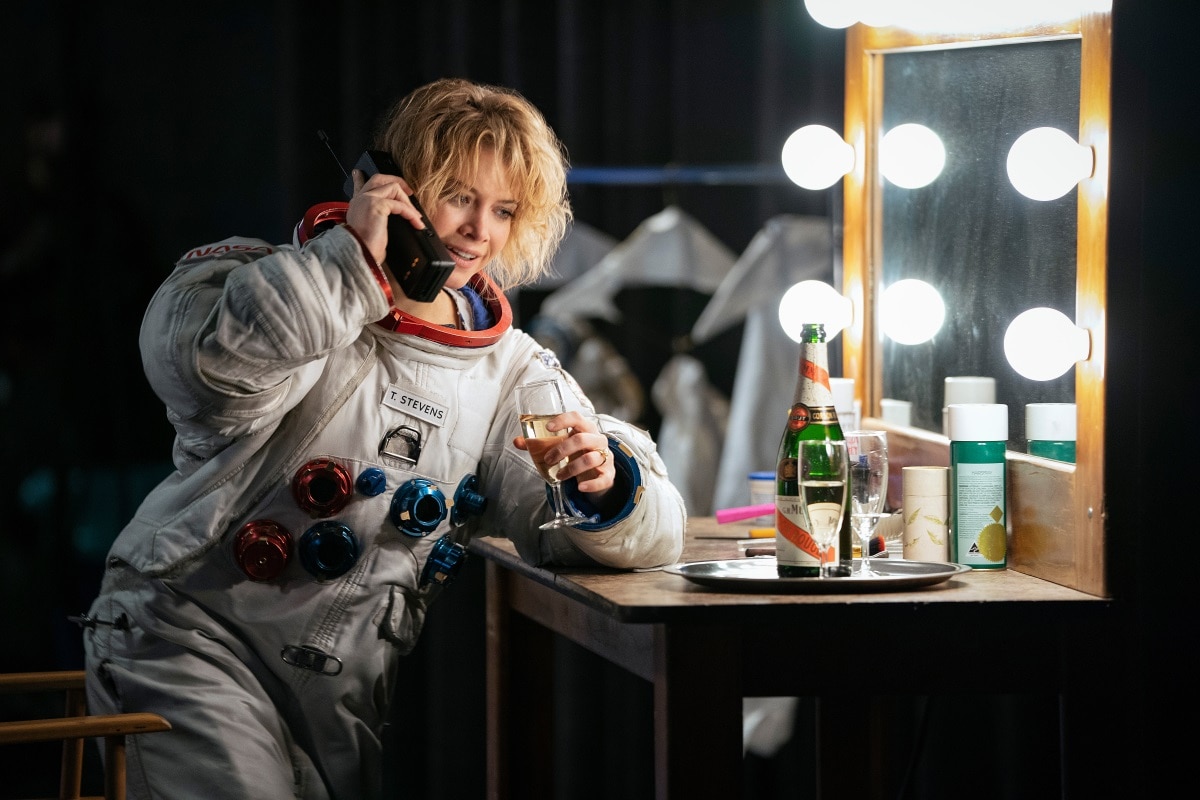 Sarah Jones as Tracy Stevens in For All Mankind season 2
Photo Credit: Apple

Season 2 begins, naturally, by catching us up on how life has changed for For All Mankind’s characters in the decade we haven’t seen them. Now chief of astronaut office, Ed spends his time practising his golf strokes and hasn’t left the planet’s surface since he got back, for he blames himself that he wasn’t there for his son Shane. His wife Karen (Shantel VanSanten) has been coping by taking over the astronaut-frequented bar Outpost. They have an adopted daughter in Kelly Baldwin (Cynthy Wu), rescued from Vietnam during the war. Ed’s best friend Gordo is now a speaker as he goes through a mid-life crisis, with Tracy Stevens (Sarah Jones), who left him years ago, now about to remarry a public personality. Tracy has become a celebrity in her own right, appearing regularly on Johnny Carson’s The Tonight Show.

Meanwhile, the first American woman on the Moon, Ellen Wilson (Jodi Balfour), is set to return down to Earth soon, having spent over 720 days on the white rock across four tours. She wants to renew NASA’s push for the stars, which seems to have gotten lost in all the competition with the Soviets. “The Moon was supposed to be a stepping stone, but it’s become a quagmire,” Ellen notes. Also down on the planet, Margo Madison (Wrenn Schmidt) has become NASA director, though some things haven’t changed: her office is still her home. There’s also a bigger involvement for undocumented Mexican immigrant Aleida Rosales (Coral Peña), though there’s much less plot for astronauts Molly Cobb (Sonya Walger) and Danielle Poole (Krys Marshall), even as they have been upgraded to main cast status.

That’s partly because there is no shortage of plot elsewhere. Aside from diving into Ed and Karen’s marital problems, For All Mankind season 2 also wants to explore Kelly’s issues with her identity — one that stems from her desire to follow in her father’s footsteps and the backlash from expected and unexpected sources. With Gordo and Tracy, the second season of the Apple TV+ series mirrors their journeys in some ways, before putting them on a collision course. Ellen reconnects with her former lover Pam Horton (Meghan Leathers) and questions her sham marriage to also-gay Larry Wilson (Nate Corddry). And of course, there’s the myriad events arising out of Cold War paranoia that fuel For All Mankind season 2’s storytelling mill.

From For All Mankind Season 2 to Drishyam 2, What to Stream in February

Shantel VanSanten as Karen Baldwin in For All Mankind season 2
Photo Credit: Apple

The 10-year gap between seasons one and two brings a cyclical nature to some parts of the storytelling. At the same time, it leads to some unconvincing outcomes. VanSanten feels younger than her years, while Peña’s young adult Aleida on season 2 feels very different from Olivia Trujillo’s teenage Aleida whom we met in season 1. She’s been through her formative years, but even so, I never felt like they were the same character. Ellen and Pam’s reunion is unsatisfying in some ways too, but that’s more because of how in keeping with Pam’s personality it is. And though it attempts to be more socio-politically sensitive to American racial tensions, it feels like namechecking of an issue that it largely ignored on season 1. It’s like telling critics, “Okay, we heard you, but we can’t be really bothered.”

That said, For All Mankind season 2 has the power to be gripping, as when the delicately-placed dominoes across the episodes knock each other down in believable fashion in the finale — replete with consequences and fallout for the main characters. That it can afford to do so is thanks to its ensemble cast and the fact that it’s jumping a decade ahead with each season. Moore has spoken about the seven-season-and-decade plan they have for For All Mankind, which makes it as vast in scope as The Crown. And just like the Netflix series, it too will have to deal with the question of what to do with its adult actors after a point. The young ones have already been recast, but soon the older ones will need that too if it doesn’t wish to go through hacky VFX aging. It must also introduce new characters.

Just like with season 1, For All Mankind season 2 ends up by giving us a peek at its future. Its behind-the-scenes future is secure, as Apple has already renewed the series for season 3. But what will the on-screen future look like as it edges closer to today, set in a world where the future has arrived quicker in some aspect but the Cold War never ended? At times, the answer seems to be that we are bound to bring our problems wherever we go — no matter how far we travel.

For All Mankind season 2 episode 1 is releasing on Apple TV+ on Friday, February 19. New episodes will release every Friday until April 23.

Google says it will delete location history for visits to abortion clinics after overturning of Roe v. Wade
Mother fatally shot ‘at point-blank range’ while pushing baby in pram
‘The number of victims is impossible to imagine’: Missile strike on Ukrainian shopping centre with 1,000 inside
‘Wholly wrong’ to block Sky News questions about JK Rowling, admits Warner Bros
UFC 276: Will a title or two change hands? Is Sean O’Malley ready for the next step?