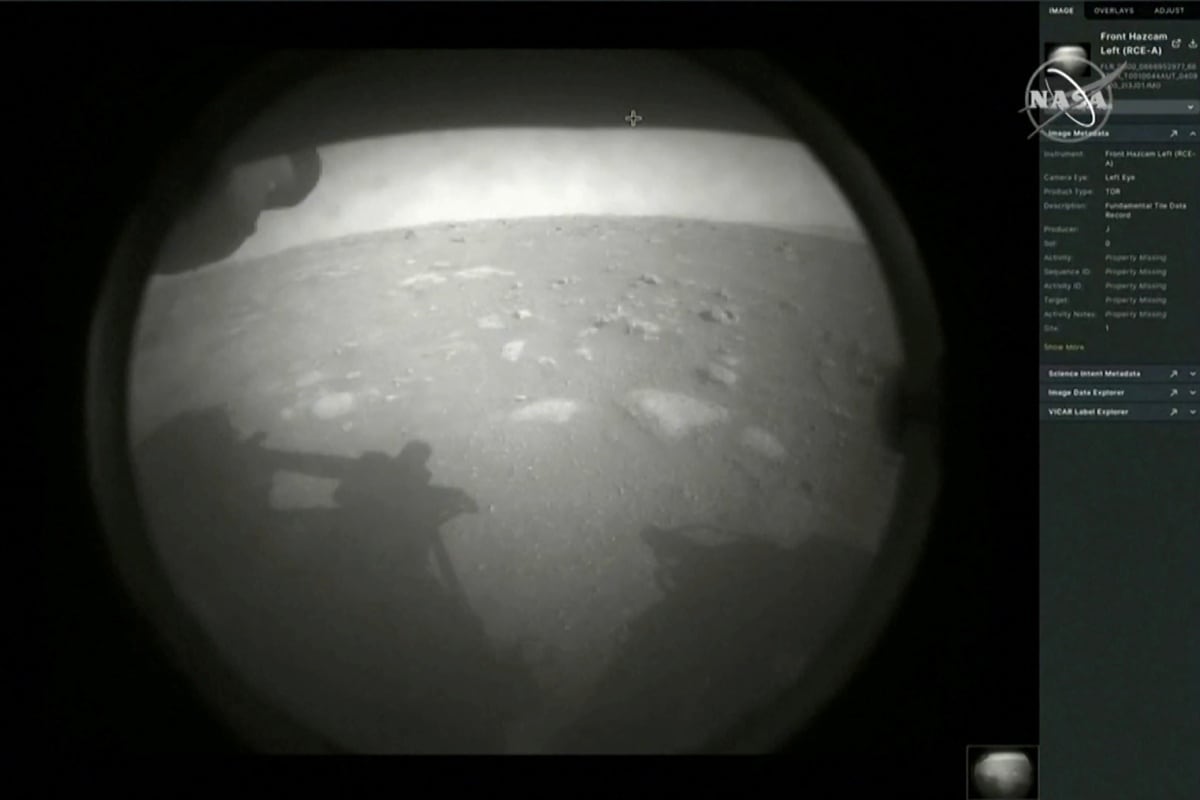 NASA’s Mars rover Perseverance, the most advanced astrobiology lab ever sent to another world, streaked through the Martian atmosphere on Thursday and landed safely inside a vast crater, the first stop on a search for traces of ancient microbial life on the Red Planet.

Mission managers at NASA’s Jet Propulsion Laboratory (JPL) near Los Angeles burst into applause, cheers and fist-bumps as radio beacons signaled that the rover had survived its perilous descent and arrived as planned on the floor of Jezero Crater, site of a long-vanished Martian lake bed.

The six-wheeled vehicle came to rest about 2 kilometres from towering cliffs at the foot of a remnant fan-shaped river delta etched into a corner of the crater billions of years ago and considered a prime spot for geo-biological study on Mars.

“Touchdown confirmed,” Swati Mohan, the lead guidance and operations specialist announced from the control room. “Perseverance safely on the surface of Mars.”

The robotic vehicle sailed through space for nearly seven months, covering 293 million miles (472 million km) before piercing the Martian atmosphere at 12,000 miles per hour (19,000 km per hour) to begin its descent to the planet’s surface.

Moments after touchdown, Perseverance beamed back its first black-and-white images from the Martian surface, one of them showing the rover’s shadow cast on the desolate, rocky landing site.

Because it takes radio waves 11 minutes to travel from Mars to Earth, the SUV-sized rover had already reached Martian soil by the time its arrival was confirmed by signals relayed to Earth from one of several satellites orbiting Mars.

The spacecraft’s self-guided descent and landing during a complex series of maneuvers that NASA dubbed “the seven minutes of terror” stands as the most elaborate and challenging feat in the annals of robotic spaceflight.

Acting NASA chief Steve Jurczyk called it an “amazing accomplishment,” adding, “I cannot tell you how overcome with emotion I was.”

The landing represented the riskiest part of two-year, $2.7 billion (roughly Rs. 19,620 crores) endeavour whose primary aim is to search for possible fossilised signs of microbes that may have flourished on Mars some 3 billion years ago, when the fourth planet from the sun was warmer, wetter, and potentially hospitable to life.

Scientists hope to find biosignatures embedded in samples of ancient sediments that Perseverance is designed to extract from Martian rock for future analysis back on Earth – the first such specimens ever collected by humankind from another planet.

Two subsequent Mars missions are planned to retrieve the samples and return them to NASA in the next decade, in collaboration with the European Space Agency.

Thursday’s landing also came as a triumph for a pandemic-weary United States, still gripped by economic and social upheaval from the COVID-19 pandemic. The public health crisis emerged in the months before the rover was launched in July and complicated execution of the Mars mission.

US President Joe Biden, watching NASA coverage of the event at the White House, tweeted his congratulations, saying, “Today proved once again that with the power of science and American ingenuity, nothing is beyond the realm of possibility.”

Congratulations to NASA and everyone whose hard work made Perseverance’s historic landing possible. Today proved once again that with the power of science and American ingenuity, nothing is beyond the realm of possibility. pic.twitter.com/NzSxW6nw4k

In a special salute in keeping with virtual communications emblematic of the era, the JPL webcast included a Zoom-like video collage flashing the faces of hundreds of Perseverance team members from home offices where many worked remotely through the pandemic.

NASA scientists have described Perseverance as the most ambitious of nearly 20 US missions to Mars dating back to the Mariner spacecraft’s 1965 fly-by.

Larger and packed with more instruments than the four Mars rovers preceding it, Perseverance is set to build on previous findings that liquid water once flowed on the Martian surface and that carbon and other minerals altered by water and considered precursors to the evolution of life were present.

Perseverance’s payload also includes demonstration projects that could help pave the way for eventual human exploration of Mars, including a device to convert the carbon dioxide in the Martian atmosphere into pure oxygen.

The box-shaped tool, the first built to extract a natural resource of direct use to humans from an extraterrestrial environment, could prove invaluable for future human life support on Mars and for producing rocket propellant to fly astronauts home.

Another experimental prototype carried by Perseverance is a miniature helicopter designed to test the first powered, controlled flight of an aircraft on another planet. If successful, the 4-pound (1.8-kg) helicopter could lead to low-altitude aerial surveillance of distant worlds, officials said.

The daredevil nature of the rover’s descent to the Martian surface, at a site that NASA described as both tantalising to scientists and especially hazardous for landing, was a momentous achievement in itself.

The multi-stage spacecraft carrying the rover soared into the top of Martian atmosphere at nearly 16 times the speed of sound on Earth, angled to produce aerodynamic lift while jet thrusters adjusted its trajectory.

A jarring, supersonic parachute inflation further slowed the descent, giving way to deployment of a rocket-powered “sky crane” vehicle that flew to a safe landing spot, lowered the rover on tethers, then flew off to crash a safe distance away.

Extra cameras designed to shoot video of Perseverance as it plunged toward the surface are believed to have captured the first footage ever recorded of a spacecraft descending onto another planet, JPL officials said. That video may be ready to show the world as early as next week, Wallace said.

Perseverance’s immediate predecessor, the rover Curiosity, landed in 2012 and remains in operation, as does the stationary lander InSight, which arrived in 2018 to study the deep interior of Mars.

Is it better to buy or lease an electric vehicle?
Gordon Brown says Britain is ‘at war with America over Ireland’
Cost of living crisis: Working but ‘getting deeper and deeper into debt’
Toyota issues recall for its flagship electric SUV following concerns about wheels coming off
Arch Manning commits to Texas: Analysis and what’s next for Peyton and Eli’s nephew