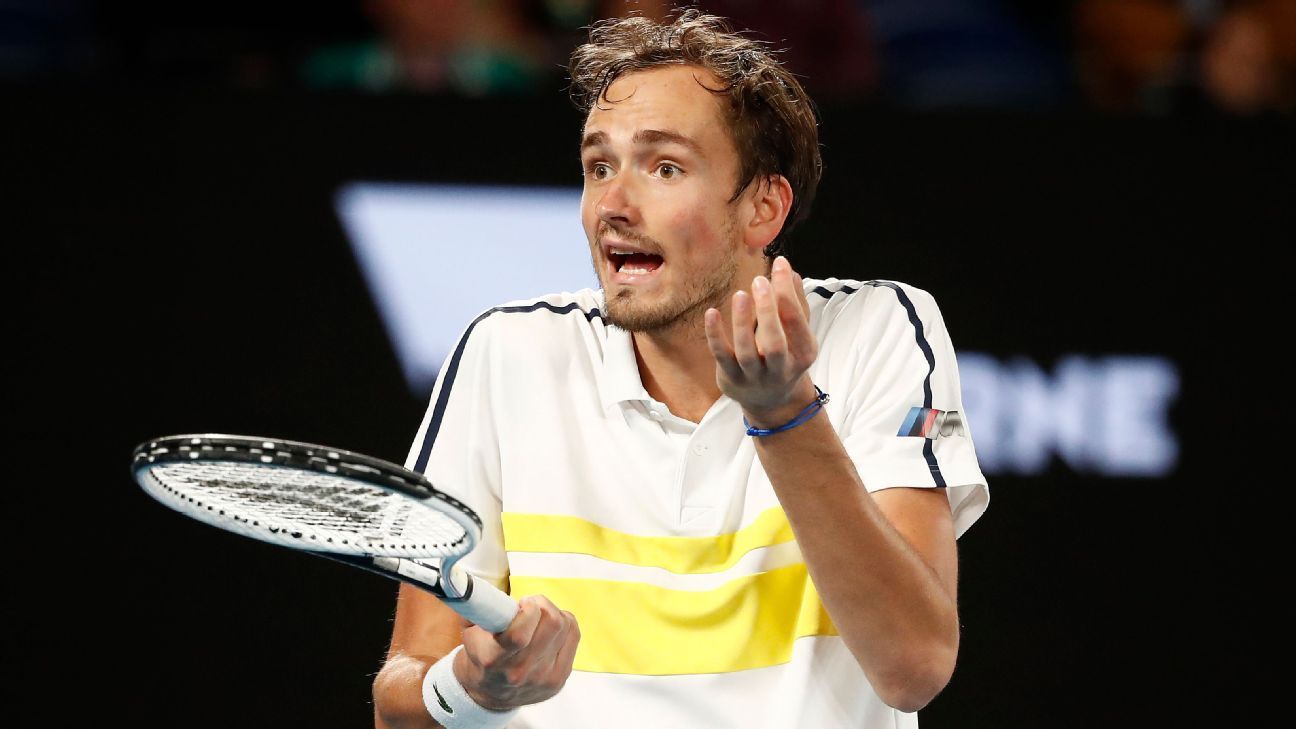 MELBOURNE, Australia — Ahead of this year’s Australian Open final, there was a distinctly different buzz around Melbourne Park. There was a sense that, just maybe, this would be the year the King of Rod Laver Arena could be dethroned by a member of the “next generation.”

World No. 1 Novak Djokovic came Melbourne as the favorite based purely on his record eight Australian Open titles and two-time defending champion, but the controversy that hounded him throughout 2020 continued with the criticism of his pre-tournament comments about COVID-19 quarantines that some locally characterized as tone-deaf. A subsequent abdominal injury during a third-round match against Taylor Fritz also seemed to open the door that much further for a new champion.

One of those younger stars set to break through was No. 4 seed Daniil Medvedev. The 2019 US Open finalist was riding a 20-match winning streak at Tour level, had dropped just two sets throughout the Australian Open and spent four fewer hours on court throughout compared to Djokovic.

But Medvedev’s straight-sets loss Sunday against Djokovic in just an hour and 53 minutes was emblematic of the next generation’s continued struggles against Djokovic, Roger Federer and Rafael Nadal, especially in Grand Slam finals.

As ESPN analyst Chris Fowler aptly put it during the match in an ode to Omar Little from “The Wire” — “There is a saying that, if you come for the king, you best not miss.”

Medvedev came for the king, but came up short. Well short.

Djokovic cruised to a 7-5, 6-2, 6-2 win and his 18th major title, the shortest Slam final he has played and the shortest Australian Open men’s final since Andre Agassi’s 2003 rout of Rainer Schuettler in one hour and 16 minutes.

It’s almost hard to comprehend just how dominant the Big Three have been. Since Federer’s first Slam win at Wimbledon in 2003, only eight men not named Federer, Djokovic or Nadal have lifted a trophy over 69 Grand Slams. Andy Murray and Stan Wawrinka have won three apiece, and six other men have one Slam each since Federer’s breakthrough.

The notion of a “top 10” or “top 20′ in men’s tennis probably doesn’t reflect how far ahead Djokovic, Nadal and a fit Federer are. You could be the fifth best player in the world, like Dominic Thiem or Medvedev and still be trailing the best by some distance. By Medvedev’s current age (25 years old), Djokovic had already won six Slam titles. Physically, mentally, and certainly at Grand Slam level, the next generation is still a level below.

Medvedev described the Big Three as “cyborgs of tennis.”

“I don’t think anyone can argue with [Djokovic, Nadal and Federer being] the three biggest names in tennis history,” Medvedev said. “I’m talking only about results. … What they did in tennis is unbelievable. I’m 25 now. To win nine Australian Opens, I need to win every year until I’m 34. I believe in myself, but I don’t think I’m able to do it.”

You only have to look at Medvedev’s service games during Sunday’s final to see how Djokovic’s step up in intensity affected the Russian’s play. His percentage of first-serve points won (69 percent) and second-serve points won (32 percent) were comfortably his worst in any match throughout the tournament, during which averaged 81 percent and 60 percent in his previous six matches. Winning just 32 percent of points on his second serve is his worst return at any major match in his career so far.

While Medvedev’s numbers fell off a cliff, Djokovic remained as consistent as ever. He won 71 percent of points on his first serve in both his quarterfinal and semifinal wins, and 73 percent against Medvedev. On his second serve, he averaged 60 in his prior two wins, and 63 percent in the final.

“[The younger players] have definitely the quality to reach the heights of major tournament trophies. They’ve proven that,” Djokovic said. “I just think Roger, Rafa and myself have managed to always play our best tennis at slams. We have the experience of knowing what to do, how we can win matches in best-of-five on different surfaces. That’s made it more challenging for guys that are in the next generation, up-and-coming.

“How long is going to take for maybe [Alexander] Zverev or [Stefano] Tsitsipas or Medvedev to do the same? I don’t know. But they seem awfully close. Medvedev was definitely a guy to beat today. … They have all contested in semis and finals of slams, so it’s just a matter of time, but hopefully not so close.”

Tennis has delivered a number of false dawns in recent years. Names like Grigor Dimitrov (who was unfairly called “the next Roger Federer” early in his career), Kei Nishikori and Milos Raonic were touted as future Slam champions. More recently, it has been Zverev, Medvedev, Tsitsipas and Thiem. Outside of Thiem’s 2020 US Open title, none have delivered on the Slam stage.

As cruel as it may be, you need to beat the best to win a Slam, not the best available. Thiem was the last man standing and rightfully deserved his 2020 US Open crown after beating fellow Next Gen member Zverev; but he would consider himself lucky that he didn’t have to face Djokovic (defaulted after striking a linesperson with a ball during his fourth-round match), Nadal (didn’t travel due to the COVID-19 risks) or Federer (knee injury) during that run.

Medvedev’s winning streak heading into Sunday’s final included wins against Nadal and Djokovic, but Grand Slam tennis is a different beast, and there are three players currently on the Tour who know how to win them more than any other men in history.

Djokovic later said the Big Three still “drive each other” despite the best efforts of the younger players on Tour.

“Roger and Rafa inspire me, and as long as they go, I’ll go. In a way it’s a race [to see] who plays tennis more and who wins more. It’s a competition between us in all areas,” the world No. 1 said. “But I think that’s the very reason we are who we are. We do drive each other. We motivate each other — we push each other to the limit.”

And this year’s Australian Open showed us again that the next generation may only break through with the aid of time. Federer is 39, Nadal 34, and Djokovic 33. And that’s a shame. The sport will be poorer for their exits, whenever they come, and the standard of tennis may never again reach the incredible highs we’ve witnessed. Djokovic’s ninth Australian Open title further cements how lucky fans have been to watch three of sport’s all-time greats put on a show for them, and the next generation of players included.

“When they’re in the zone, and I’m not shy to say it, I feel like they’re just better tennis players,” Medvedev said. “For sure, when we are also in the zone, we can bring them a big fight, we can win some matches, maybe some big titles, but it’s just that the percentage is on their side. I rank [Federer, Nadal and Djokovic as the] top three toughest opponents in my life.”

Quick Charge Podcast: January 26, 2023
Halliburton’s stellar Q4 shows strong oil demand can sustain the Club holding through 2023
Twitter accused of being behind on rent once again – and this time, it involves King Charles
Man dies after being crushed by pop-up telescopic urinal in London’s West End
Speakers call for overhaul of All-Party Parliamentary Groups