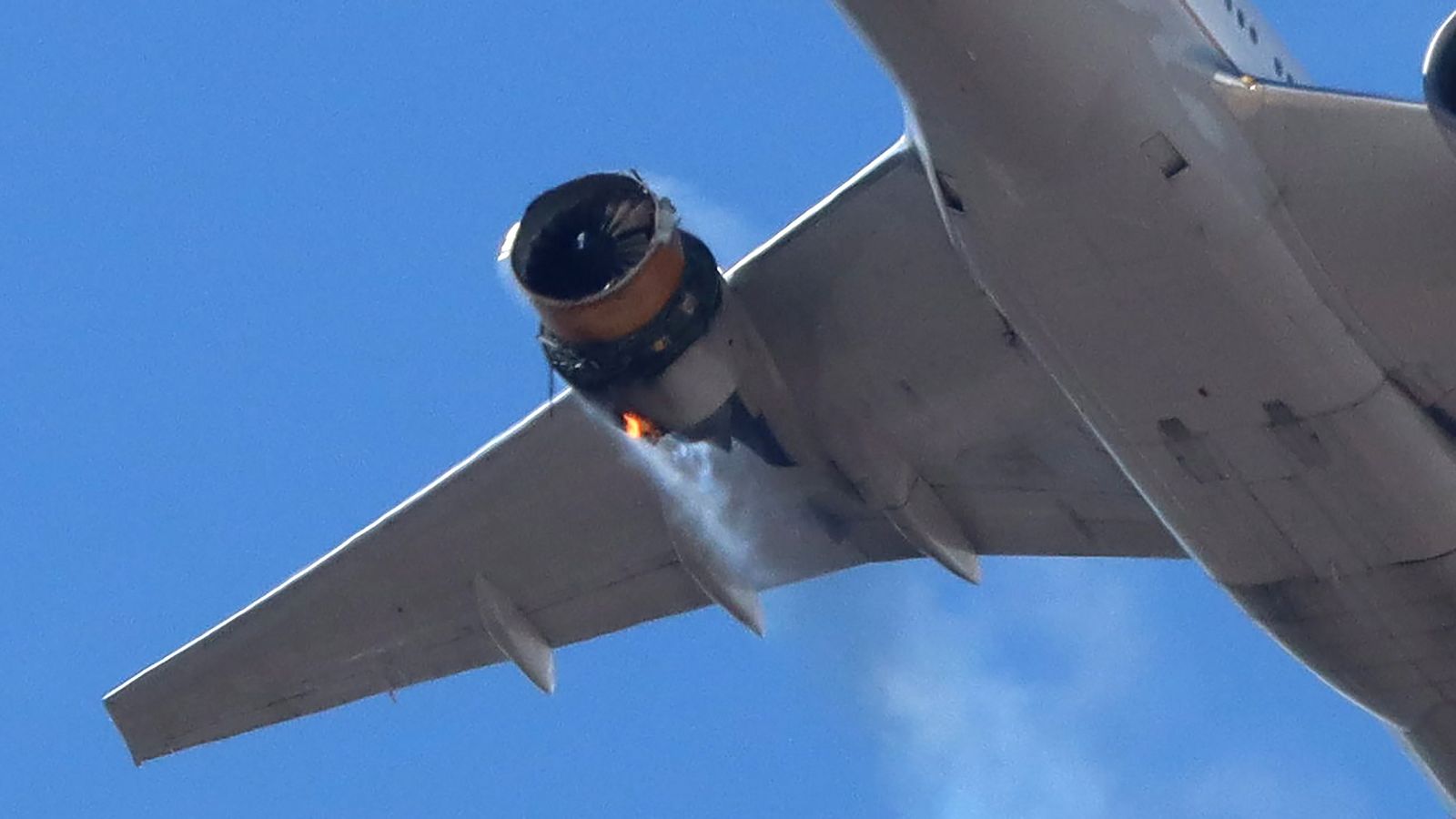 Boeing 777s with the same engine as the one which caught fire after taking off from Denver will be temporarily banned from entering UK airspace.

In one, a plane’s engine caught fire and parts were reported to have dropped to the ground in the Netherlands.

After issues this weekend, Boeing B777s with Pratt & Whitney 4000-112 series engines will be temporarily banned from entering the UK airspace. I will continue to work closely with the @UK_CAA to monitor the situation.

A woman was injured by falling debris when the Boeing 747-400 cargo plane dropped engine parts after taking off from Maastricht Airport on Saturday.

That came after a United Airlines 777 bound for Hawaii was forced into an emergency landing on the same day as its right engine was seen engulfed in flames and debris plunged towards the ground.

All 231 passengers and 10 crew onboard, as well as those on the ground, were unhurt.

Boeing has said operations of all 777s powered by Pratt & Whitney engines should be suspended until the Federal Aviation Authority (FAA) finds an appropriate protocol for inspections.

Currently, there are 69 such planes in service and 59 in storage.

After the Pratt & Whitney 4000-112 engine incident on a Boeing 777 aircraft, we have suspended this configuration’s use in UK airspace. It is not used by any UK airlines.

It is operated by airlines in the USA, Japan and South Korea where authorities have also stopped its use. pic.twitter.com/i97yio5X2q

“While the NTSB [National Transportation Safety Board] investigation is ongoing, we recommended suspending operations of the 69 in-service and 59 in-storage 777s powered by Pratt & Whitney 4000-112 engines until the FAA identifies the appropriate inspection protocol.

“Boeing supports the decision yesterday by the Japan Civil Aviation Bureau, and the FAA’s action today to suspend operations of 777 aircraft powered by Pratt & Whitney 4000-112 engines.

“We are working with these regulators as they take actions while these planes are on the ground and further inspections are conducted by Pratt & Whitney.”

In the Dutch incident, witnesses heard one or two explosions shortly after take-off and the pilot was informed by air traffic control that an engine was on fire, Maastricht Airport spokesman Hella Hendriks said.

“The photos indicate they were parts of engine blade, but that’s being investigated,” she said. “Several cars were damaged and bits hit several houses.”

The development represents a fresh blow to Boeing as its 737 MAX returns to the skies nearly two years after the fleet was grounded following two deadly crashes.

In the case of the 777, the FAA had earlier ordered inspections of the hollow fan blades, unique to the engine model, be “stepped up”.

Other recent incidents involving Pratt & Whitney engines include an engine explosion six minutes after take-off which forced a flight between Okinawa and Tokyo to turn back in November.

In each of the incidents, no one was hurt.

Two of the engine’s fan blades from the Hawaii flight were fractured and the rest of them “exhibited damage”, according to a separate statement from the National Transportation Safety Board (NTSB).

However, it added it was too early to draw conclusions about how the incident happened.

United Airlines, the only US airline to use the engine model in its fleet, is temporarily removing affected planes from service.

It said it will work closely with the FAA and the NTSB to “determine any additional steps that are needed to ensure these aircraft meet our rigorous safety standards and can return to service”.

Japan has gone a step further and decided to stop operating a total of 32 planes with that engine, according to Nikkei Asia.

The country’s ministry of land, infrastructure, transport and tourism also ordered the planes out of service.

Boeing’s 737 MAX fleet was grounded in March 2019 following two fatal crashes in which 346 people were killed.

In November, the US aviation regulator cleared the way for its return to US skies, followed a week later by the European Union Aviation Safety Agency (EASA) and the UK’s CAA.

Alec Baldwin to make first court appearance over fatal Rust shooting this month
Kiley McDaniel’s top 100 MLB prospects for 2023: Which future star is No. 1?
Simpsons episode where Homer goes on strike shown by Channel 4 on ‘Walkout Wednesday’
What is Scorpion, the now disbanded police unit at the centre of Tyre Nichols’ death?
British Steel draws up plan for 800 job losses amid government funding talks