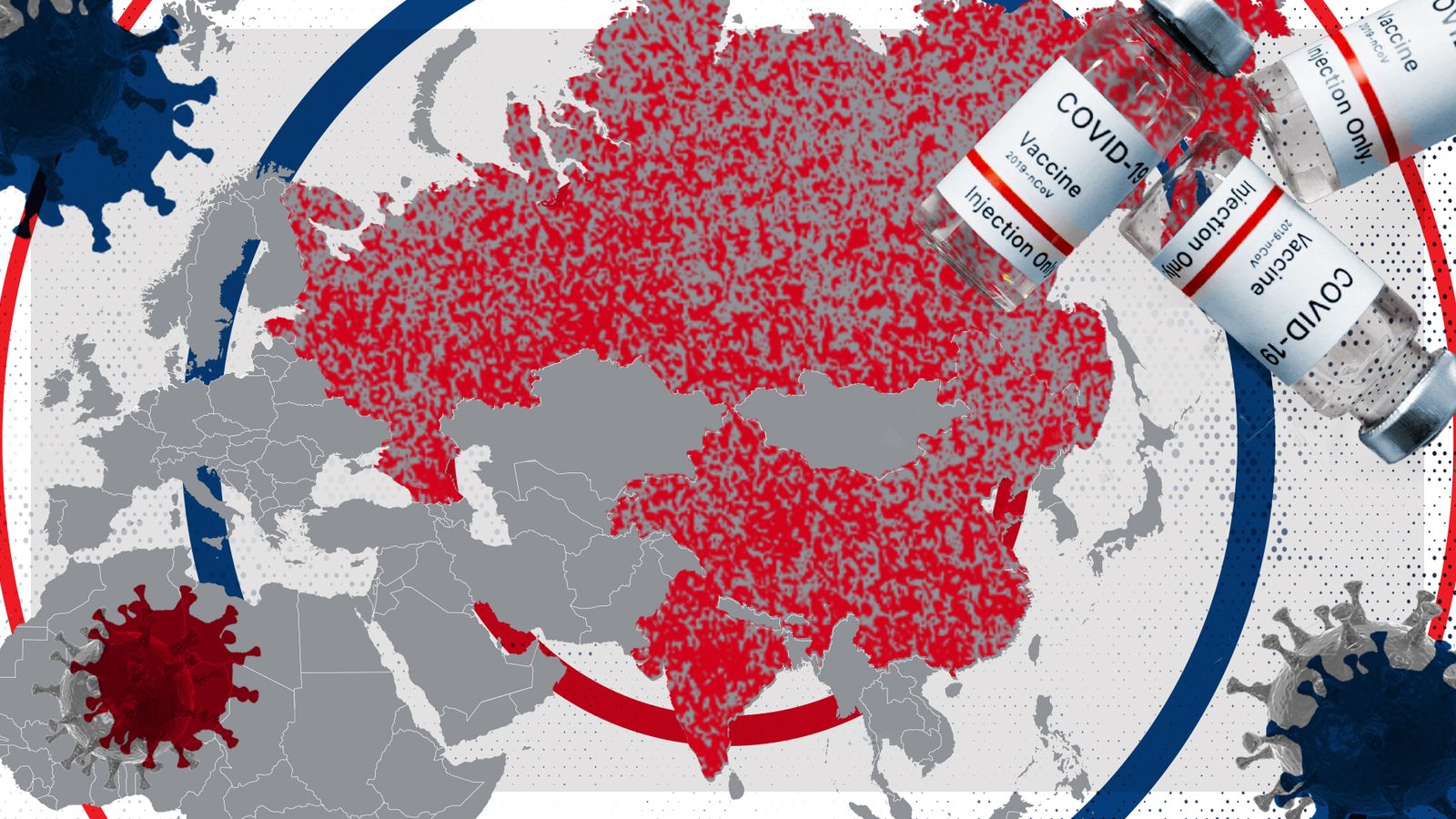 China, Russia and India have been accused of engaging in “vaccine diplomacy” as they cherry-pick nations to give their COVID-19 vaccines to in order to bolster their influence.

Sky News analysis has found 47 countries, plus the African Union which represents 55 nations, have made or been offered vaccine deals with India, China and Russia.

In 21 countries, their sole vaccine supplies up until 19 February were from Russia, China and India.

In another 16 countries, half or more of the doses agreed are from those three countries, data from science analytics company Airfinity shows.

Most of those vaccines are from China and Russia but some in Africa and Asia are from India.

However, the vast majority of the world’s COVID-19 vaccines are not from Russia, China and India, with just one in 10 doses from them. Their main purpose is to impose their influence, experts have said.

These are the countries that have accepted doses from Russia, India and China. But this is not just about helping allies, it is also about cherry-picking nations they can influence.

LATIN AMERICA
China and Russia quickly offered up their vaccines in South America.

“Latin America is a big prize because Russia and China don’t have much influence there. It’s also the US’ backyard so for Russia it’s also about how they can annoy the US”
Agathe Demarais, global forecasting director at the Economist Intelligence Unit

However, Beijing does not have good diplomatic relations with Paraguay so has not offered the Chinese vaccine but Russia has done a deal instead.

AFRICA
The continent presents an opportunity for China, especially, to expand its already considerable power in the region.

The region is highly reliant on COVAX, but the programme has yet to deliver any vaccines so China has been offering up its jabs to countries such as Egypt.

Russia has also swooped in and will provide the African Union, which represents 55 countries, with 300 million doses – 45% of the union’s secured doses.

EASTERN EUROPE AND THE MIDDLE EAST
The wealthy UAE is vaccinating its citizens – with Sinopharm’s jab – at the second fastest rate in the world after Israel.

Some eastern European countries have bought vaccines from both Russia and China, including Hungary who got fed up of waiting for the EU to agree a deal.

ASIA
China already holds a lot of sway over several Asian nations, such as Indonesia, Laos and Cambodia.

But the number of doses China has secured of its own vaccines is unknown. We only know 63 million doses have been administered so far in China.

India is trying to use the vaccine to bolster its presence over China.

“There’s competition with China but Sri Lanka, Nepal and Bangladesh are three countries India feels are still up for grabs to try to control the neighbourhood,”
Dr Subir Sahir, a development expert from SOAS

For China, Russia and India, the COVID-19 vaccine has opened a door to countries they have not had influence over before, and to nations where they can boost their power further.

Agathe Demarais, global forecasting director at the Economist Intelligence Unit, told Sky News: “What Russia and China are trying to do is to bolster their global standing.

“They’ve been doing this for decades but both leaderships are seizing this opportunity to further their standing – it’s a brick in the whole ground plan.”

Ms Demarais, who is also a former French diplomat in Russia and the Middle East, added that it is a long-term strategy so whether they are rich or poor is not necessarily the most important issue, it is whether they can impose their influence.

“Bolstering long-term global presence will give them leverage over emerging countries, when you’re receiving vaccines from Russia and China, they will have small requests that you can’t say no to,” she added.

“Russia and China are presenting themselves as saviours but there’s a risk – they have had production issues, they’re struggling to vaccinate their own populations so there’s a big concern they will overpromise and underdeliver.”

China and Russia are not only providing vaccines to countries but they are also providing factories to make them and workers as part of their long-term strategy in some nations.

India, which is only producing vaccines in India, is targeting neighbouring countries and is trying to beat China to them, development expert Dr Subir Sahir from The School of Oriental & African Studies, University of London said.

He belives there is another strand of vaccine diplomacy for India in that the prime minister, Narendra Modi, wants to be seen on the world stage as a man of “great generosity”.

However, with the roll-out within India going slowly and some states refusing to administer the Indian-made Covivax vaccine due to efficacy concerns, there is a question over how far India’s vaccine diplomacy can go.

COVAX, the initiative aimed at ensuring all countries get the vaccine fairly, does not have any deals with Russia, China or India yet, but China has said its three developers have applied to supply their vaccines to the programme and is waiting to see if they are approved.

‘Mass death’ of children if no global aid as Ukraine war exacerbates worst drought in 40 years
Big things are happening in PFL with Bruno Cappelozza and Renan Ferreira
Source of polio virus could be narrowed down to house or street, minister says
Can new streamer Paramount+ compete with the likes of Netflix, Disney+ and co?
Prince Charles expresses ‘personal sorrow’ at ‘slavery’s enduring impact’