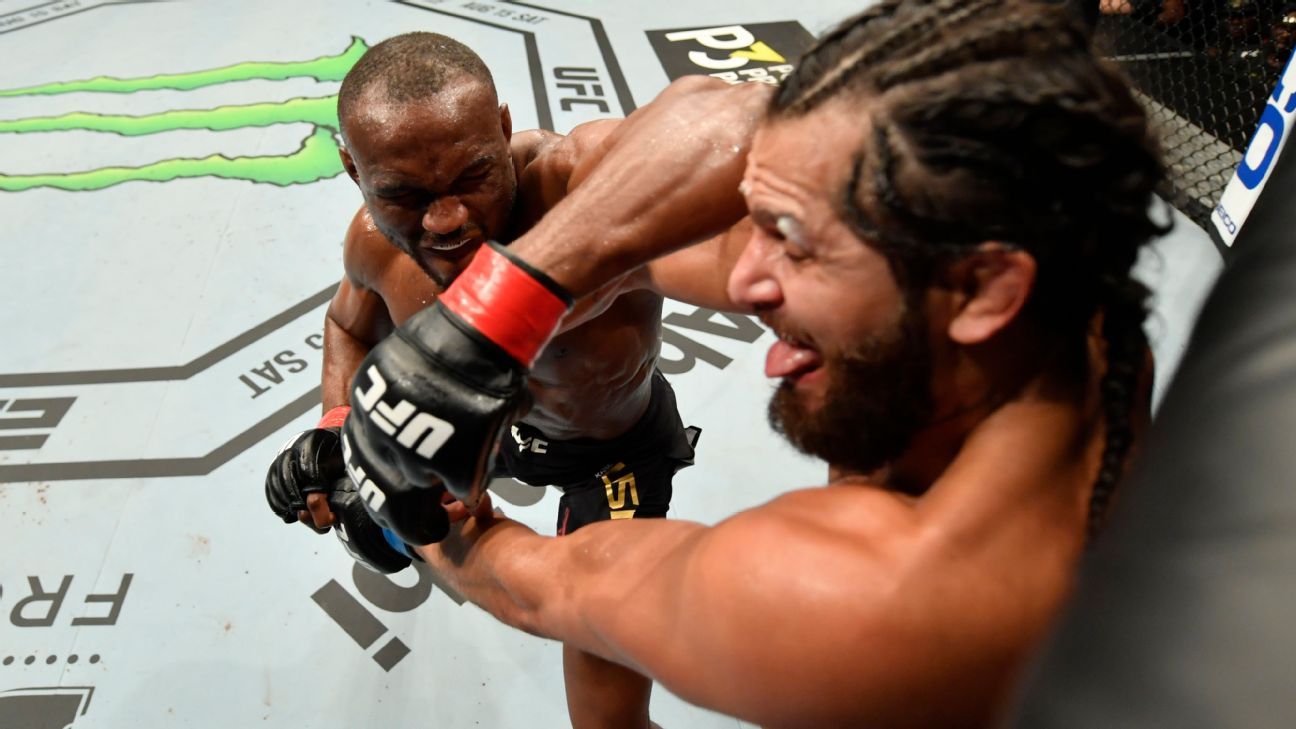 Deciding who should be next to challenge UFC welterweight champion Kamaru Usman is perhaps the hottest topic in MMA, and it involves some of the biggest names in the sport.

Usman dispatched Gilbert Burns via second-round TKO at UFC 258 on Feb. 13, and he immediately called out Jorge Masvidal as his next opponent. It made sense, at least from a financial perspective.

Among the top contenders, a group that includes Colby Covington, Leon Edwards and Stephen “Wonderboy” Thompson, Masvidal is the biggest name, which means it could be Usman’s most lucrative matchup.

But who is most deserving of the title-shot opportunity?

For his part, Usman has cooled on a Masvidal rematch, at least publicly. There seems to be genuine animosity with these two, and Usman may not like Masvidal cashing in on the excuse that he lost only because of a shortened camp.

Usman also told MMA Junkie that Covington made a mistake in not taking the fight vs. Edwards. Covington said he’s in the championship business, indicating what he believes should be at stake the next time he fights.

ESPN reporters Marc Raimondi and Jeff Wagenheim disagree on which approach to take, and they’re ready to make their cases.

Wagenheim: I’ll start by narrowing down the candidates by one: Give the title shot to anyone but Masvidal. I’m disqualifying him because he’s coming off a loss. Don’t get me wrong; I love watching Jorge fight. I even love how he carries himself in the leadup to his fights, because I know he lives every word that comes out of his mouth. We have grainy YouTube evidence of that from his days of fighting in the backyards of South Florida. But championship fighting requires — or should require — more than a badass persona.

I don’t blame Masvidal for accepting Usman’s callout; I would expect nothing less from him or any fighter with championship aspirations. I don’t even blame Usman for making the callout, because he recognizes that Masvidal is a money fight. But someone has to be the adult in the room, and that falls on UFC matchmakers. If they want their championship belts to mean something, they need to book legitimate title fights. This would not be one.

Raimondi: All these points are noted, Jeff. I understand where you are coming from. But to say anyone but Masvidal should be getting the next title shot? I think that’s a step too far. In fact, I’d argue no one has really made a tremendously compelling case recently. Edwards hasn’t fought in 19 months. Usman finished Covington. Thompson is only two fights removed from a loss to Anthony Pettis and a two-fight losing streak. Michael Chiesa is still one or two wins away. In cases like these, where there is no standout contender, the UFC is going to go with what does the best business. And that’s Masvidal, whose only loss since 2017 was to Usman when he came in on six days’ notice last summer. On top of that, Usman called Masvidal out. The reigning champion should get some say as to who his next title defense comes against, don’t you think?

Wagenheim: No, Marc, I actually don’t think Usman or any champion should have a voice in choosing a challenger. The person wearing the belt is the prey, not the hunter. I do recognize that the most important syllable in the word “prizefighting” is the first one. Money fights are real, and I’m all for them, but they should be traveling a path parallel to the championship track, with only occasional and coincidental meetings at the crossroads.

But again, I’m not criticizing Usman for wanting the biggest payday for his family. This is about the UFC’s role in overseeing its championships. I know combat sports are different from other sports. But in any sport that builds toward championships, winning has to matter. If the NFL were run by UFC matchmakers, the Super Bowl earlier this month probably would have pitted the Buccaneers against not the Chiefs but the Patriots. Tom Brady vs. Bill Bellichick — now, that’s the money fight. Who cares that the Pats went 7-9 and failed to qualify for the playoffs?

Raimondi: This is where you and I have never seen eye-to-eye. I’m not telling you anything you don’t know, but comparing MMA to the NFL is not apples to apples. The UFC is a promotion — it’s not a league. The UFC is in the business of selling pay-per-view events and broadcast contracts. That’s just the nature of MMA. It has an entirely different structure than other sports. There is no season or playoffs unless we’re talking about PFL. Ultimately, who fights for titles and in big main events is decided by the fans. It’s somewhat of a popularity contest, sure. If Masvidal is a compelling fighter who more fans want to see, he’s going to have a leg up when it comes to matchmaking. I’m not saying that’s a good thing or a bad thing. But it’s the reality and we have to accept it for what it is.

Also, I wholeheartedly disagree with you that a champion should have no say as to who he or she fights next. UFC fighters are independent contractors who should absolutely have a say in the trajectory of their careers. The UFC promotes fighters; it should not order fighters around like an authoritarian state. Booking a title fight is a business transaction between two fighters and the promotion. This should not be a fiefdom.

Wagenheim: “Accept it for what it is”? Never! You know me, Marc. I’m all for independent contractors getting to choose their career paths. And yes, I want all of the fighters to make piles of money. But this argument is really about those shiny belts that only 11 fighters from a UFC roster of several hundred athletes get to have affixed around their waists. Those straps are not meant to signify that someone sells the most pay-per-views or has a huge social media following. For that, the UFC came up with a “BMF” belt, and Masvidal owns it. Let him defend that one, and go ahead and call it a “championship” fight. But leave the real championship fighting to those who’ve earned their way into the cage.

Raimondi: I respect your consistency and your (perhaps naïve) traditionalism when it comes to UFC titles and title shots. In a perfect world, what you said would be the case. But capitalism says otherwise. So, Jeff, since you think anyone except for Masvidal would be a better fit for a title shot, who would you choose? I hate the word “deserve” in MMA — who’s to say who deserves what? — but who do you think deserves to fight Usman for the belt next?

Wagenheim: If Covington had made it another 50 seconds in his 2019 challenge of Usman, he’d clearly be the guy. But instead of that fight being remembered as the close battle it was, the enduring visual is of Usman dropping him and knocking him out. Not a selling point for a rematch. (See? I can talk combat sports capitalism.) So I agree with what you said above, Marc: No one has stepped forward and separated himself from the crowd of contenders. But if I were the matchmaker, I’d still give the title shot to Colby. He’s ranked second in the division for a reason, and he did bounce back with a win over an ex-champ. And I think that legit title fight rematch would generate more heat for the UFC to sell than would Usman-Masvidal 2.

But if the matchmakers opted to give the shot to either Edwards or Thompson instead, in the interest of booking a championship bout with new-car sheen, I’d be OK with that. I actually prefer seeing weight divisions roll onward with new matchups rather than getting stuck on an endless spin cycle of redo after redo. Yeah, Usman and Edwards did meet back in 2015, but Leon has been on a massive roll ever since. Suffice to say there’s no perfect matchup right now, so maybe the UFC should book three fights all at once: an Usman-Covington 2 main event, with an Edwards-Thompson co-main, and the winners meet a few months down the road. Bam! The welterweight division’s 2021 is set.

Raimondi: That’s not bad at all. Pretty good matchmaking, actually. I wouldn’t be against Usman vs. Covington 2. But really what should have happened at some point was Masvidal vs. Covington to set up a title fight with Usman for the winner. We wouldn’t even be having this conversation if that went down. Alas, we lost out on that grudge match, and who knows if it will ever happen? Covington doesn’t seem to have an opponent queued up for him now that he’s not taking the Edwards fight that was proposed after Khamzat Chimaev dropped out. I think it’s safe to say the UFC does not enjoy doing business with Covington. He should have gotten a title shot against Tyron Woodley when Woodley was champion, and it always fell through. Perhaps the UFC is at an impasse with Covington again here.

One thing that we’re forgetting in all of this is the prospect of Usman and Masvidal coaching opposite each other on The Ultimate Fighter. It’s the return of the UFC’s hallmark reality series, and there’s no doubt the promotion wants to make a big splash with a rivalry matchup and big stars. That’s another reason why Usman vs. Masvidal 2 makes sense. The UFC can get those guys in a big-money PPV main event — and on ESPN+ weekly, coaching on TUF. It’s not quite a three-piece-and-a-soda. But that’s a pretty good combo.

Wagenheim: I think we can agree that a lot of missed opportunities have led us to where the welterweight division now stands. Some of the blame falls on matchmaking limitations in the time of COVID-19, and some of it on impasses in financial negotiations. But why has Masvidal been allowed to sit idle since July? Why was Edwards booked as essentially a gatekeeper for a rising prospect in Chimaev rather than in a fight against a fellow title contender? Usman is a hot property as a champion right now, and it would have been ideal to set in front of him a challenger who’s on a roll.

The champ was quoted as saying Covington made a mistake by not taking a fight against Edwards, and I get where Usman is coming from. The winner of that one would have built a lot of momentum, adding appeal to the next 170-pound title fight. But did Colby really make a mistake? Time will tell. What if Covington ends up getting the title shot anyway, without risking his spot in line? The UFC’s title fight matchmaking has no clear criteria, so fighters end up jostling for position rather than fighting for it. It’s like fighters on TUF making a name for themselves with antics in the house rather than performances in the cage. In that respect, the sport itself sometimes has the flavor of a reality TV show.

Raimondi: Yes, indeed. And do you know what that flavor tastes like, Jeff? Money. The UFC is worth billions. The promotion is obviously doing something right. And Usman vs. Masvidal 2 would only add to that bottom line.

Stars Janelle Monae and Taraji Henson hit out at Supreme Court during BET awards
Every new passenger car sold in the world will be electric by 2040, says Exxon Mobil CEO Darren Woods
Is it better to buy or lease an electric vehicle?
Boris Johnson confident of winning second term as PM – and eyeing up third
El Salvador’s $425 million bitcoin experiment isn’t saving the country’s finances