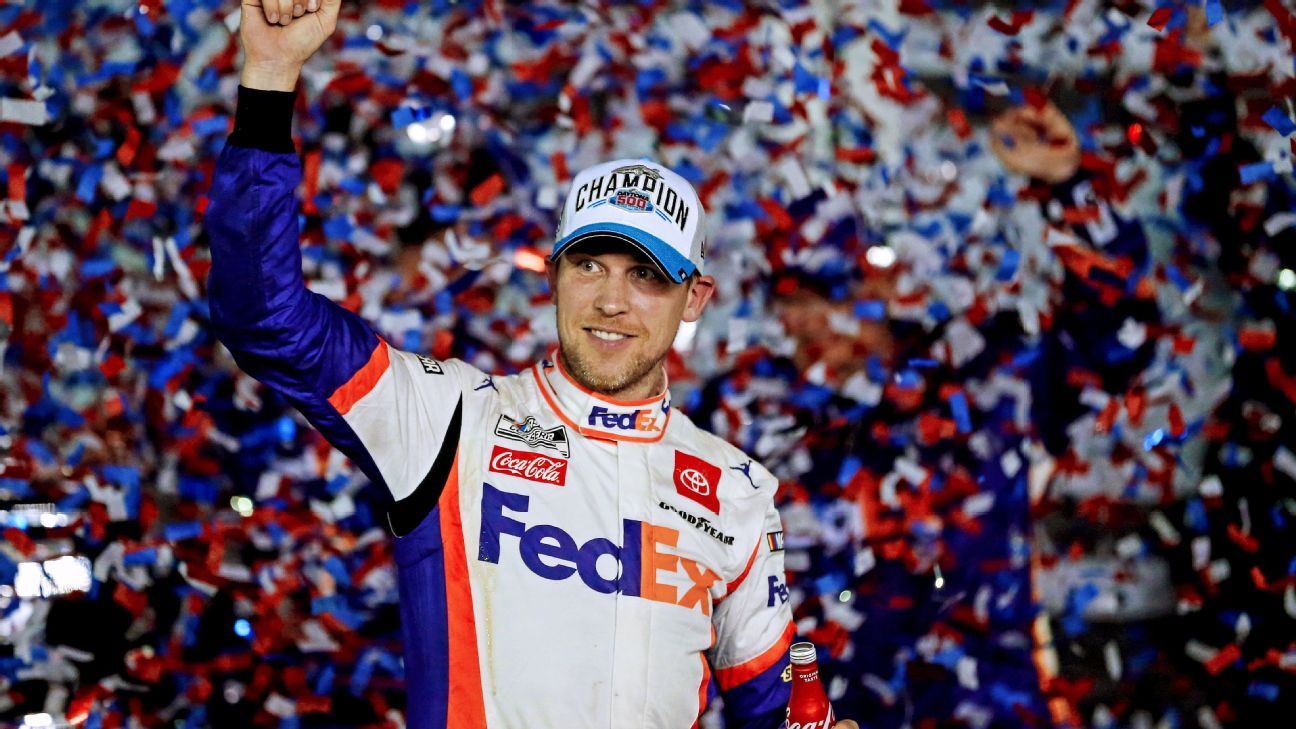 CHARLOTTE, N.C. — Denny Hamlin is NASCAR’s current points leader and locked in at Joe Gibbs Racing with a contract extension inked at the start of his 17th season with the organization.

So when an analyst suggested Hamlin and the JGR veterans should be worried about their job security, Hamlin took that personally.

“If I’m a veteran driver in the Gibbs organization, I’m looking over my shoulder and in the rearview mirror because I’m watching my replacement out there win race, win races at the Xfinity level, win races at the Cup level,” said Kyle Petty, an analyst and former driver.

Hamlin initially responded on Twitter, then further explained his annoyance in a Wednesday media session.

“I’m not sure who I can equate it to in another sports world, but essentially someone else that’s at the top of their game, and (analysts are) like, ‘Oh, this guy scored 30 off the bench, he’s coming for your starting position,’ OK?” Hamlin said.

Hamlin and Petty have had a tense relationship since 2007 when Hamlin, in his second Cup season, ran into the back of Petty’s lapped car at Dover. An irate Petty leaned into Hamlin’s car and slapped down Hamlin’s helmet visor after chastising the young driver. The two have been cordial, at best, since.

It is not unusual for interest to skyrocket in young drivers following a strong on-track showing. And it is particularly common when it comes to JGR; Toyota has a deep driver development system but has only five seats in the Cup Series to graduate its talent.

Bell, who is 26, is a longtime Toyota-backed driver who got a JGR seat in his second season of Cup racing.

The Toyota pipeline is deep, and JGR has a full crop of young talent in the the Xfinity Series with Brandon Jones, 24, and Harrison Burton, 20. Ty Gibbs, the 18-year-old grandson of the team owner, has entered the picture with his surprise Saturday win on Daytona’s road course.

JGR has never had enough seats to accommodate all the Toyota drivers, so the future of the youngsters is a popular ongoing debate. Hamlin took exception, though, to industry insiders suggesting proven veterans should be concerned about their jobs.

“I can understand it coming from fans because they’re not prefaced to information that analysts or media are,” he said. “So my thing was just like, ‘Have you watched one race in the last two years? Have you seen any articles about re-signing?’ It just dumbfounds me.”

Brad Keselowski also bristled at the segment. The 14-year veteran and former Cup champion is in a one-year contract with Team Penske and waging a fight to prove talent trumps all other qualities. Because Keselowski is paid at the high end of the driver salary market, he knows he can be replaced by an unproven youngster for a fraction of his paycheck.

“This is all so crazy,” Keselowski responded to Hamlin on Twitter. “Are you younger and can we pay you less? Do you have any followers on social media? Yes? We like you! There are tons of great young drivers, but the hype train is insane.”

Hamlin’s rebuke began on social media, which has once again become his sounding board. He was one of the first NASCAR drivers to use Twitter to engage with fans and fellow drivers, but NASCAR fined him in 2010 for criticizing the series and Hamlin scaled back his online presence.

Now that he is 40 and has a larger role in the sport — Hamlin along with Michael Jordan are owners of a new Cup team that is Toyota’s fifth Cup seat — he’s resumed his sassy online persona. Fans have responded favorably to Hamlin’s snarky recent commentary, and Hamlin joked about that, too:

“Obviously, since I am at the end of my career, why care at this point?”