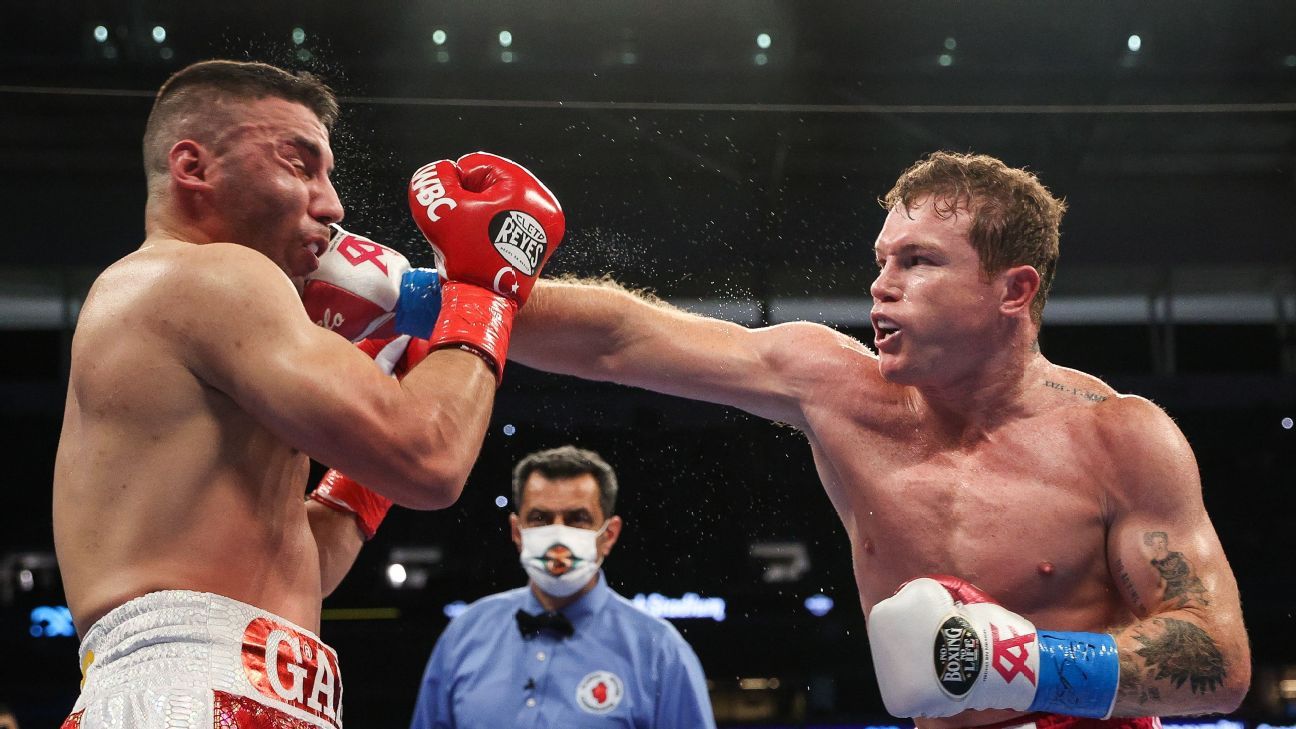 It wasn’t close on Saturday night, and as expected, Canelo Alvarez took care of WBC mandatory challenger Avni Yildirim to retain his titles. Immediately after the fight, Alvarez’s next fight was announced — a unification bout against Billy Joe Saunders. Will Alvarez achieve his goal of unifying the super middleweight division in 2021?

A week prior to Alvarez’s dominance, his teammate Oscar Valdez looked sensational in defeating Miguel Berchelt to win the WBC junior lightweight world title. Now a fight against Shakur Stevenson seems to be in the near future for Valdez, but is Stevenson ready for such a challenge? If that fight does come to fruition, preparation will be key. Valdez is part of Eddy Reynoso’s team, which might just be the best stable in boxing.

And late last week, the rights for Unified lightweight champion Teofimo Lopez’s next bout were won by the upstart tech company Triller, who was behind the Mike Tyson-Roy Jones Jr. exhibition fight in November. Triller won the purse bid with a surprising $6 million offer, and although Lopez is still under contract with Top Rank, their relationship is strained. Will Lopez fight again under his promoter’s umbrella?

Real or not: Team Reynoso has the best current stable of fighters

Then there’s Julio Cesar Martinez (17-1, 13 KOs), unable to fight last weekend due to a hand injury but still the WBC’s flyweight champion. Andy Ruiz (33-2, 22 KOs), whose brief reign as a three-belt heavyweight champ belies his talent. Finally, the team also is represented by Oscar Valdez (29-0, 23 KOs), who became a two-division champion when he knocked out favored Miguel Berchelt for the WBC’s 130-pound belt last Saturday.

In case you’re keeping score at home, that’s a combined record of 171-4-2 and four current belts, the most recent being the most impressive.

Alvarez is Reynoso’s rainmaker, of course, much like Manny Pacquiao once was for Freddie Roach. And like Roach, Reynoso might be having not merely a moment — but perhaps, a decade. If you ever doubt that Alvarez is more than a supreme talent, check the tactical improvements he made from the first Golovkin fight to the rematch. That’s coaching.

Still, there is no better example than what just happened in Vegas with Valdez and Berchelt. You don’t turn a tough guy into a boxer overnight. It takes years. It takes some bad nights and requires a fighter who’s willing to fight outside his comfort zone (not an easy ask, considering that fighters — for great reason — never want to be seen as vulnerable).

But it also requires a special trainer — a guy whom said fighter would be willing to trust, a trainer with a substantial and sterling reputation and, above all, a teacher. What Valdez did in outboxing the fearsome Berchelt was sublime. It’s a testament to his character and his talent. It doesn’t happen without Eddy Reynoso.

Real or not: Canelo Alvarez will unify all four 168-pound world titles in 2021

Nick Parkinson: Real. Alvarez showed that size is not an issue for him at super middleweight. He dominated Callum Smith in a lopsided points win in December, despite a significant height and reach disadvantage, and thoroughly dominated Avni Yildirim in a third-round TKO win on Saturday. Smith had 7-inch height and 8-inch reach advantages over the 5-foot-8 Alvarez, but Alvarez was still able to close the distance and land his combinations to body and head.

That first win earned Alvarez the vacant WBC belt and Smith’s WBA “super” title. Saturday was merely a simple stepping stone for Alvarez as he moves toward another world title unification fight against WBO titleholder Billy Joe Saunders in May.

Saunders is a slick and experienced southpaw and a world champion in two weight classes, but he has shown erratic form, and Alvarez’s pace is likely to be a problem when they meet for three world titles. Caleb Plant, who defended his IBF belt against Caleb Truax in January, lacks experience and punch power to trouble Alvarez in what would be the final piece of the jigsaw puzzle later in 2021.

Real or not: Teofimo Lopez will fight the winner of Jose Ramirez-Josh Taylor

Timothy Bradley Jr.: Real. Lopez is in a great position at the moment — he is extremely motivated and marketable. A fight at junior welterweight between the Ramirez-Taylor winner would be a main attraction as Lopez has already unified belts at 135. I don’t think either Taylor or Ramirez would turn down an opportunity to go heads up against Lopez. It would be a big payday for all parties involved and a good contrast in styles. Network complications we see throughout the sport wouldn’t be an issue, as all three men are under the same promotional banner.

Real or not: Teofimo Lopez will fight on Top Rank again

Michael Rothstein: Real. Lopez is one of Top Rank’s most bankable stars — and one who knows how to promote himself effectively in the media. The promotion should have never let Lopez’s title defense get to a purse bid in the first place, and, provided it does well on Triller, Top Rank will see the value Lopez has and will also see the error in its ways. Lopez has years left on his contract with Top Rank, too, so it would behoove both parties to work things out when it comes to the future of the promotion and the future of Lopez.

There’s too much to gain for both sides — including the relationship Lopez has with ESPN due to its contract with Top Rank — to not come to an understanding once bad feelings simmer down.