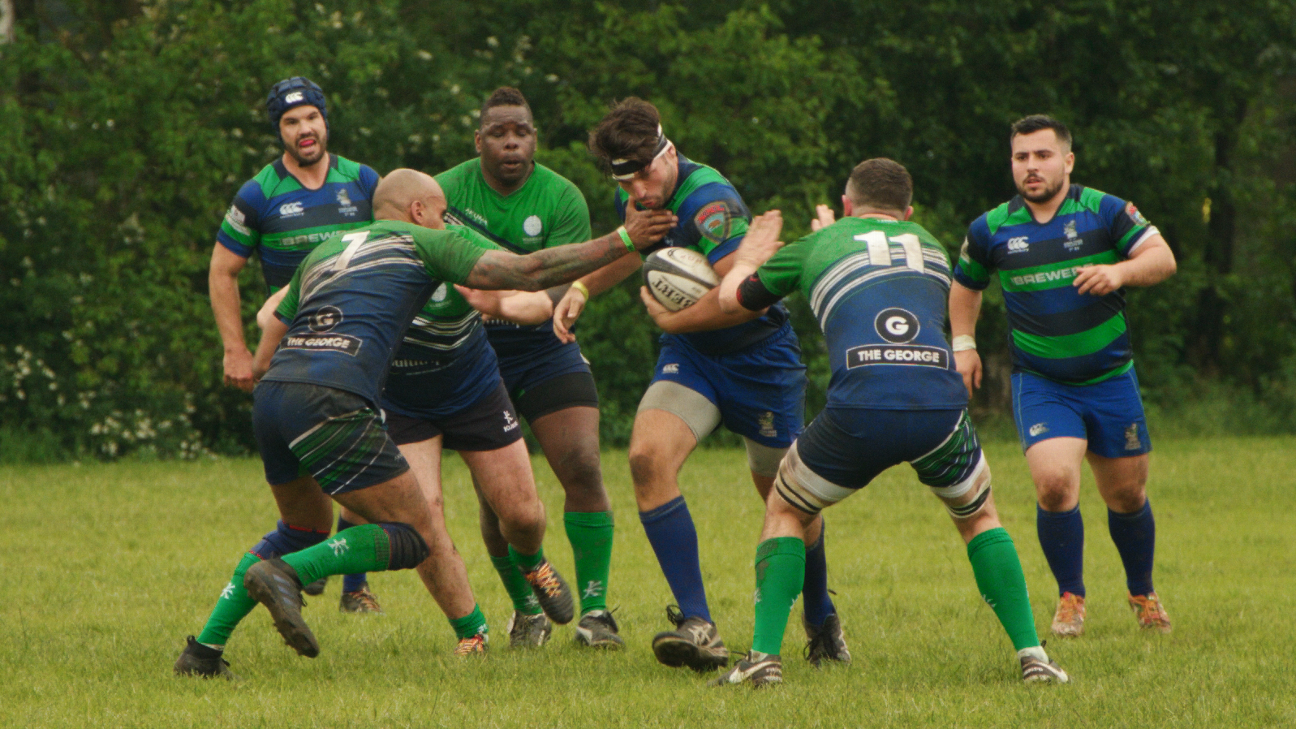 When Eammon Ashton-Atkinson, an Australian television reporter, decided to film his rugby club as they went to the biannual Bingham Cup in 2018, he could never have imagined the positive reaction a documentary about it would receive.

The film Steelers is about London-based Kings Cross Steelers, the world’s first gay rugby club and one of over 60 such sides world-wide. Although the stories in the film are related to the struggles of coming out, depression, and a history of bullying for being gay, they’re are told in a way which wider audiences can empathise with.

“It’s a story about a gay rugby club, but it’s also a story about human struggle, and people using sport and their sense of community to help each other, which is universal,” Ashton-Atkinson told ESPN.

“I’ve never done this before [made a documentary], I just knew there was a good story there to be told, but I didn’t really expect such a great reaction and I was surprised that allies in the straight community really connect with the film.”

The film, released in late 2020 in Australia, also highlights the challenges women in the rugby world face, through the team’s then-director of rugby Nic Evans. The former Wales international explains the frustration of being underestimated and overlooked in her coaching because she is a woman coaching a men’s team.

“She’s got a certificate for the highest coaching level, and since she left the Steelers she’s been consistently overlooked and not even shortlisted [for jobs] than men who are less qualified and less experienced than her, which is heart-breaking and disgusting,” Ashton-Atkinson says.

Watch the trailer for ‘Steelers’ which tells the story of the people behind the world’s first gay rugby club.

Though being gay in 2021 in western society is often unremarkable today, you don’t have to go back very far to find traumatic stories. Ashton-Atkinson, now 34, vividly tells his story about being bullied at school.

“It’s about that whiplash that a lot of LGBT people have where we are celebrated now, but 15-20 years ago we weren’t. We’ve gone from having these horrible experiences which had left so many big scars to now just being like, ‘Well everything is ok so you should just get on with it and be grateful,'” he explains.

“That whiplash is what caused me the depression because I grew up always being bullied everyday relentlessly, and that meant I struggled to form friendships and didn’t know how.

“I became very insular and cut off from my family and so all those things took a long time to repair to the point where I join the club and for me that was the final healing I guess I needed from all those experiences.”

But, if it’s easier to come out now, then why do we need gay rugby clubs?

“People say, ‘Shouldn’t you just play for a straight team?’ And I guess that’s the whole point of the film,” he says.

“If I wanted to play at a straight club, I would have to question is it safe to come out? Will people treat me differently? Will things be said behind my back?”

“We all need our community and a place where we can just be ourselves and in sport in particular there still is huge levels of toxic masculinity, so if I wanted to play at a straight club, I would have to question is it safe to come out? Will people treat me differently? Will things be said behind my back?

“That’s a thought that does go through your mind, and while it’s generally a positive there are still pockets of homophobia.”

Steelers club chairman Matt Webb goes even further, telling ESPN: “I think that still ties in to the need for people to come together in the same community who have shared lived experiences. There’s still a lot of trauma around the LGBT community in sport.

“I always come back to, ‘Why do you need a London Scottish or London Irish team’ — people have a shared history, want to be around and with familiar people.”

– Mark Bingham: The rugby player and his legacy

The film itself almost didn’t come out at all. Ashton-Atkinson forgot to back-up the 45-minute edit he had been working on for months when reformatting his computer. Frustrated, he threw the hard drive into a drawer for a year. Then, in 2019, Australia’s Israel Folau spouted his infamous anti-gay comments on Instagram, saying “hell awaits” gay people.

Ashton-Atkinson opened the drawer and started the edit again from scratch, and turned it into the unconventional documentary it has become. “I thought, you know what, f— you, I’m going to finish this film as a response to him, in a way.”

What his reaction was when he first heard the Folau comments? With the expletives removed, he said: “So my first reaction was a massive eye roll… Why? Why do you need to say that even if you believe it? You’re supposed to be a role model and, ok, if you hold those strong religious views the bible says you shouldn’t have tattoos and you’re covered in them…

“You’re a sportsman, play sport and be a good role model — people look up to you and we’re talking about people’s lives and mental health here. Not just some flippant throwaway comment, so yes you might be good at throwing and kicking a ball but that doesn’t give you the right to invalidate people for who they are.

“With being gay, you don’t think that I grew up desperately wanting to change my sexuality, like, wishing the gay away? I remember I would say to myself, ‘You have to think about girls’, you know, ‘Go on dates with them and you’ll eventually just grow to like that’ and it was awful.”

The birth of the Steelers

In classic London-style in 1995, a group of blokes sat around a table with a pint in a Kings Cross pub and drew up the plans. Since one of the original six was a fan of Pittsburgh’s NFL team, the Kings Cross Steelers was born.

But it wasn’t plain sailing. Letters were sent to 120 clubs asking for games, and most didn’t get back to them. They were dubbed in the tabloids as ‘Harlequeens,’ there was homophobic comments, and a fear over contracting HIV and AIDS. A ‘what happens if they start bleeding on the pitch?’ attitude.

“For those of us who grew up when it wasn’t ok to be gay, just really before the internet was common, there was huge stigma. You had Margaret Thatcher’s Section 28 [a law brought in the UK by a Conservative government from 1988-2003 to the “prohibit the promotion of homosexuality”], misconceptions about the HIV virus,” Ashton-Atkinson explains.

“For those guys who were setting up that team in 1995, they were real trailblazers because they were going out to different teams in Essex week-in-week out smashing down stereotypes one game of rugby at a time and from what I heard, these men in Essex, they had never met an openly gay man before, let alone an openly gay sportsman.

“For them to just pretty much realise, ‘Hey, we’re pretty much the same as you’. I think that’s the best advocacy they could have done and it’s people like that that we owe a lot of thanks to because they’re the ones who made it easier for us to come out now.”

Webb says a lot of the aforementioned attitudes have gone. However, “There are still issues with homophobia and homophobic language being used on the pitch.

“And one of the things we’ve been working on with Harlequins and Monash University is that a lot of that isn’t actually homophobia, it’s the culture of clubs, the challenges of languages not being followed through.

“People using the same words because they want to look big and impressive, or prove their masculinity. There still is that toxic masculinity in sport and in a game where it’s tolerant but not fully inclusive.”

In February last year Harlequins became the first team to host a professional Pride game. This month they launched a LGBTQ+ supporters association to provide an inclusive space for fans.

The film blends the stereotypes of ‘traditional’ macho rugby for 80 minutes, verses becoming drag queens a few hours later. The club atmosphere allows people to be who they want to be without holding back. It’s a heart-warming mix of humour, then empathy, as the pangs of suffering it took for individuals to get there tug on the heartstrings.

“It shows what rugby should be and can be — it can be about that masculine butch side on the pitch where you have to be aggressive and ready to protect your body and your teammates on the line, but it doesn’t mean you can’t also talk about the mental health issues that come alongside being a young adult in this world,” Webb says.

“The ability to juxtapose that with drag and the fact there is still misogyny and poor treatment of women in the sport. Highlighting those is important but seeing the successes as well that people can overcome it and seeing that the benefits are there if people put the work in to get to it.”

“So I didn’t want to make it about me but I thought there might be more power if there’s a first-person story so you’re seeing the club through my eyes.”

With negatives come the positives. In short, the club changed his life, he met his husband John there, and his band of brothers. “For the first time in my life I felt like I’d found a place where I belong, I could be fully myself and I’ve never had so many friends before. The best moments of my life were in that rugby club.”

“Sports people have so much influence, they are like modern day gladiators and young kids do look up to them. We have so many allies like James Haskell who is in the film, you couldn’t ask for better. That’s the flip side when people come out and support the community that means a lot,” he says.

Steelers is available to watch in the UK as part of the Glasgow Film Festival from Feb. 26- March 1.

Albanians ‘should be barred’ from claiming UK asylum, minister says
Hancock: Ministers were warned about COVID deaths, but Johnson said ‘it will probably go away’
Army may be deployed to ease possible strike disruption over Christmas
Brittney Griner freed in prisoner swap with Russian ‘Merchant of Death’ arms dealer
Trump firm guilty of defrauding tax authorities for more than 15 years