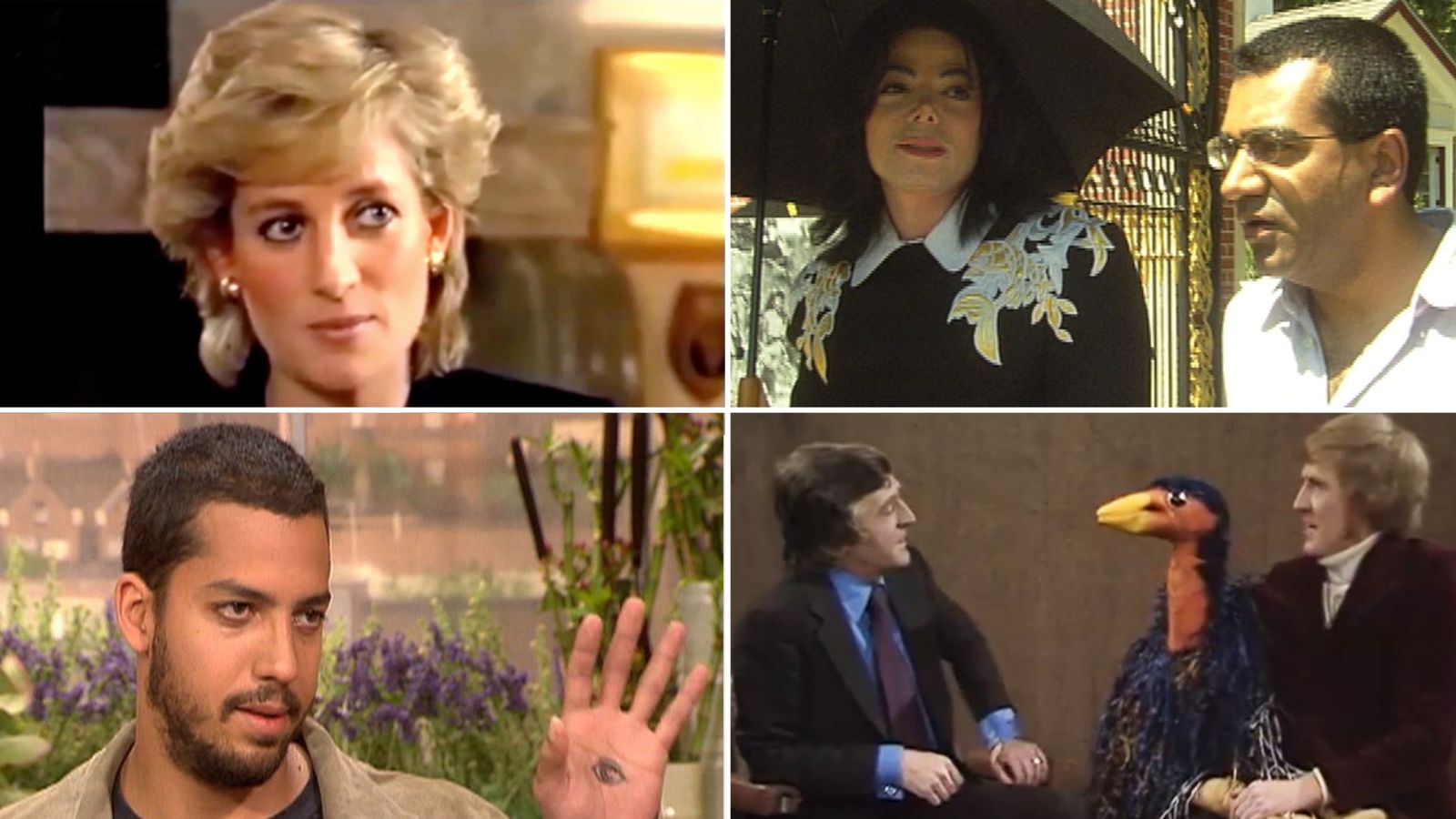 With Harry and Meghan dominating headlines in the run-up to their much-anticipated, tell-all interview with Oprah Winfrey, it seems the world is waiting to hear the revelations about the Royal Family expected to be revealed when the programme airs.

The Duchess of Sussex won’t be the first royal to publicly open up, of course, nor the first celebrity to give an explosive TV chat.

Ahead of the Winfrey programme airing in the US on Sunday, we take a look at some of the most memorable high-profile broadcast interviews of all time. 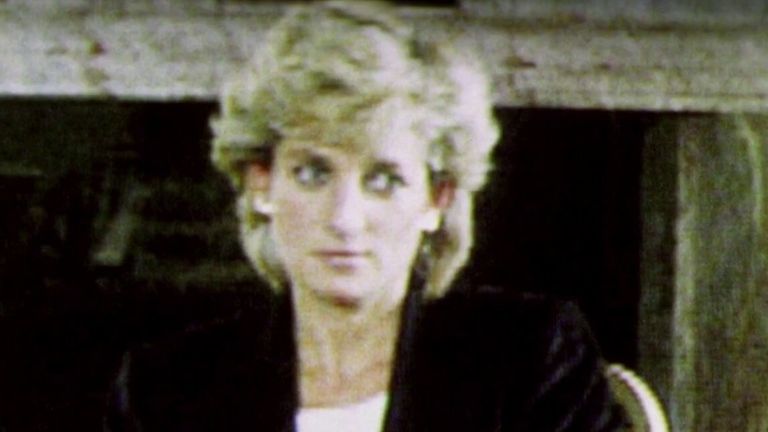 It was the TV scoop of the decade: Martin Bashir‘s famous 1995 Panorama interview with Diana, which aired nine months before her divorce from Prince Charles.

Revelations included the princess describing Camilla Parker Bowles as the “third person” in the royal marriage, Diana’s admission of infidelity with Army captain James Hewitt, and discussion of her struggles with bulimia and doubts over Charles’ suitability to be king.

Watched by 23 million people, the BBC interview made Bashir a household name – but sent shockwaves through the monarchy.

It came back into the spotlight towards the end of 2020, when an independent inquiry was launched looking into how Bashir and the corporation landed the exclusive with Diana. 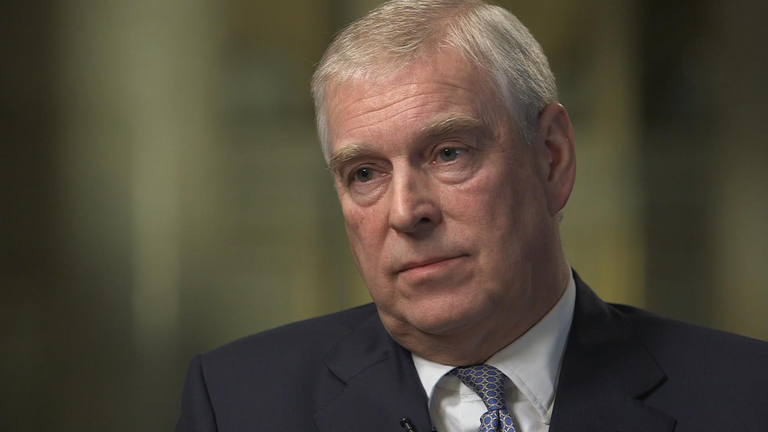 Prince Andrew on Epstein: ‘I let the side down’

Sticking with the royals, there will be no forgetting Prince Andrew‘s interview with Newsnight in 2019, in which he spoke to journalist Emily Maitlis about the late convicted sex offender Jeffrey Epstein.

His appearance on the programme was the culmination of years of statements from Buckingham Palace, and was intended to dispel increasing scrutiny of his relationship with Epstein, and allegations that the Duke of York had sex with a 17-year-old girl.

However, it didn’t quite have that effect.

Viewers and analysts were left stunned by the interview, with one public relations expert comparing the footage to “watching a man in quicksand”.

The prince was mocked relentlessly on social media for some of his comments – notably his mention of Pizza Express and the fact he didn’t sweat.

To millions he will always be Top Gun’s Maverick or the man who can make a Mission Impossible possible, but for many Cruise will also be remembered as the man who jumped on Oprah’s couch in 2005.

In a startlingly over-the-top way, he professed his love for his then new girlfriend – there were finger guns, high-fives and finally a crowd chant to bring the woman in question, Katie Holmes, on to the stage.

“We’ve never seen you behave this way before,” said Winfrey, before telling the audience: “The boy is gone.”

After playing Joey Potter, the object of Dawson “most-intense-teenager-in-the-world” Leery’s affections in Dawson’s Creek, Holmes must have been used to relationship melodrama, but surely this was one whoop too far.

The couple married the following year but the actress filed for divorce in 2012.

Bashir secured another huge name for interview in 2003, having moved from the BBC to ITV.

The journalist spent eight months working with the King of Pop to produce the documentary Living With Michael Jackson, covering topics including the singer’s fear of his strict father and his use of cosmetic surgery.

They also discussed the pop star’s own children and invitations to others to spend time at his home. It followed allegations of abuse against Jackson which have resurfaced in recent years following his death.

A ratings hit in both the US and the UK, Jackson later complained to the Independent Television Commission and the Broadcasting Standards Commission about his depiction in the show.

Michael Parkinson, the man who has interviewed thousands of celebs, has described his infamously awkward 2003 chat with Hollywood star Meg Ryan as one of his worst.

The actress seemed as if she didn’t want to be there, giving one-word or very short answers to his questions.

In a magazine interview a few years later, Ryan reportedly referred to Parky as “a nut” and said she felt he had been “berating” her for appearing naked in the film she was promoting.

Parkinson has discussed the interview many times since, and has said that although Ryan was clearly not in a good mood, he wishes he had handled the situation differently.

After discussing how she had at one point trained to be a journalist, Parkinson asked her: “What would you do now if you were me?”

To which she replied: “Wrap it up?”

Another awkward one, this time for Eamonn Holmes, who came up against illusionist David Blaine on the GMTV sofa in 2001.

In a bizarre, starey interview, Blaine was monosyllabic but did hold up his palm, revealing an image of an eye, in a somewhat unusual response to having to answer questions on live TV.

But this one has a part two, as in 2019 the pair met again on This Morning for an interview in which the magician explained his behaviour, telling Holmes and his partner Ruth Langsford he wanted to ensure the family and friends of interviewees in the green room behind the scenes were watching the show.

“I’m glad one of us found it funny,” Holmes told him, before saying it was “the longest six minutes of my life”.

However, he added: “Don’t feel so bad about it because I’ve traded off it ever since.”

He was a sporting hero who brought cycling to global popularity after surviving testicular cancer and going on to become the greatest in his field.

But another Winfrey scoop saw cyclist Lance Armstrong admitting taking performance-enhancing drugs and using blood transfusions during the time he won his seven Tour de France titles from 1999 to 2005.

In a bombshell interview, Armstrong said it was “not possible” to win the gruelling race so many times without doping.

By the time it aired in 2013, he had already had his tour wins taken away and been banned from the sport for life, but this was his public confession.

During his chat with Winfrey, he acknowledged his admission was probably “too late” for most people.

Michael Parkinson gets another entry into the infamous TV interview annals, this time for his encounter with an over-zealous puppet in 1976.

When the famous British interviewer hosted Rod Hull and Emu on his chat show, he got more than he bargained for, with Emu’s repeated attacks causing him to fall off his chair.

In later years, Parky reportedly lamented that despite all the star guests he had interviewed during his career, he would always be remembered for “that bloody bird”.

And the interviewer wasn’t the only one to fall foul of Emu, with Snoop Dogg also getting a peck during an appearance on The Word.

She was a 22-year-old White House intern when she began an affair with a then 49-year-old Bill Clinton while he was US president, between 1995 and 1997.

“I did not have sexual relations with that woman,” Clinton famously said in his denial, before going on to apologise publicly in 1998, acknowledging that he had “sinned”.

The following year, Ms Lewinsky broke her silence on the international scandal in a much-anticipated interview with journalist Barbara Walters.

In 2018, she wrote an essay for Vanity Fair and revealed she had suffered from post-traumatic stress disorder due to the public shaming she received following the affair.

While the actor was hoping to keep questions to his latest Avengers film, the interviewer asked him about his recovery from drug abuse and jail.

At one point, Downey Jr asked: “Are we promoting a movie?” And then later walked out.

Speaking to US DJ Howard Stern not long afterwards, the actor reportedly described Guru-Murthy as “a bottom-feeding muckraker” and suggested he had a “creepy, dark agenda”.

The journalist gave his side of the story in a first-person piece for the Guardian, writing: “We don’t do promotional interviews on Channel 4 News.”

It wasn’t the first time Guru-Murthy had got on the wrong side of a Hollywood star, of course, having annoyed director Quentin Tarantino two years earlier when asking about possible links between on-screen violence and real-life violence – causing the filmmaker to tell him: “I’m shutting your butt down.”

Tesla Semi looks incredible as an electric motorhome
UK ‘is already in a recession which is expected to last into next year’
Tesla Model 3 prototype spotted ahead of rumored design refresh
Bitcoin Family is moving more than $1 million into decentralized exchanges after Sam Bankman-Fried’s FTX disaster
Christopher Eccleston: ‘Patriarchy cocks everyone up… It did its damage to me too’