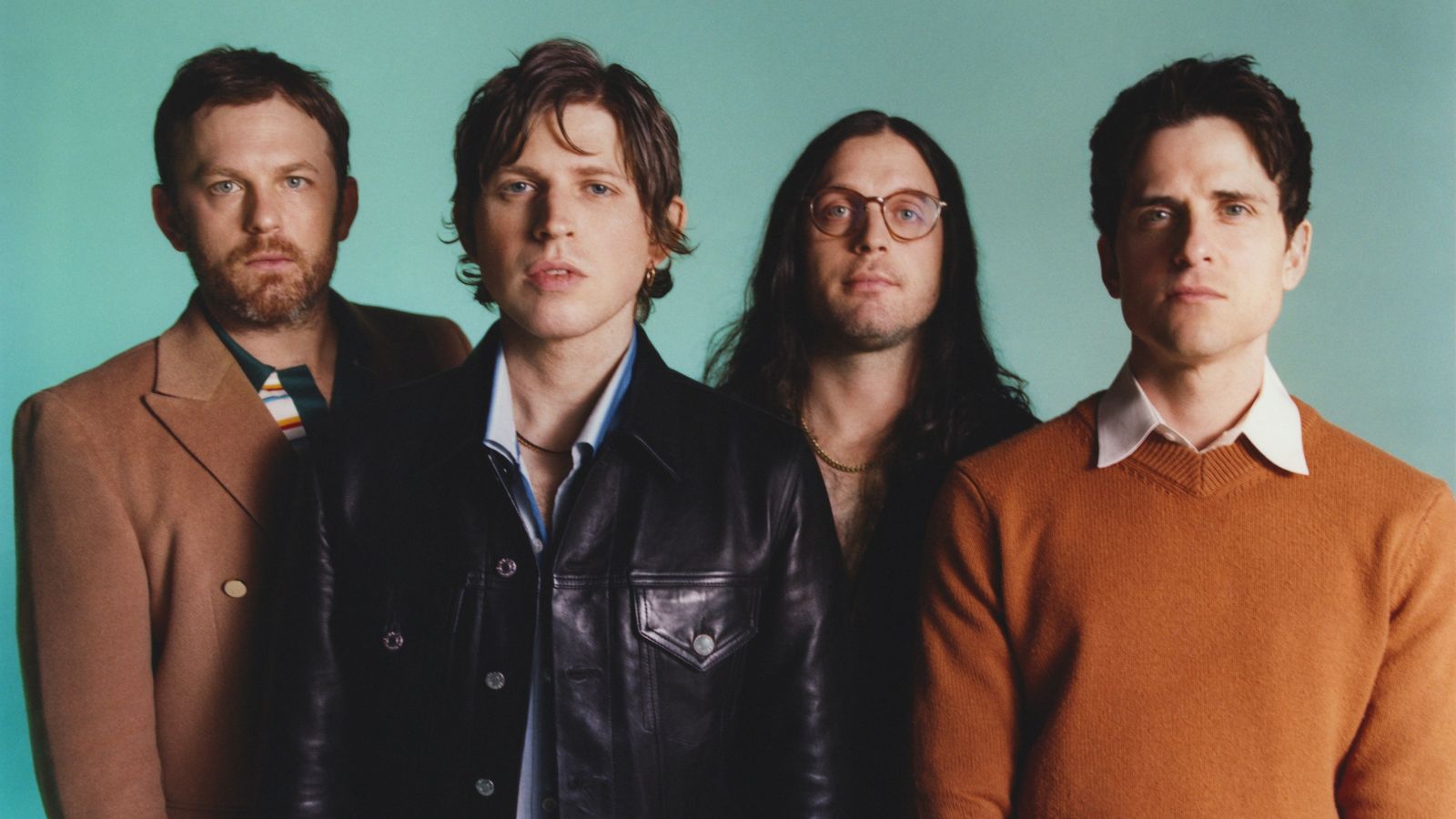 By now, Caleb Followill’s wife, model and former Victoria’s Secret angel Lily Aldridge, hopefully will have been able to listen to his latest work, his eighth album with Kings Of Leon.

She is certainly doing her bit to support her husband’s record, plugging it with heart and fire emojis to her 5.3 million followers on Instagram, the true sign of love in 2021.

But being married to a rock frontman does not get you special privileges, especially when that frontman struggles with hearing his own songs.

“It’s hard for me to listen,” says Followill, speaking to Sky News on the phone from his home in Nashville, Tennessee, less than 48 hours before the album’s release. “As a matter of fact, I don’t think my wife’s actually even heard the record fully. She’s wanted to hear it…”

He almost sounds uneasy just talking about it. “To hear myself is something that’s really hard for me. So, yeah, I think she’s excited for the album to come out so she can listen.”

So Aldridge has to buy it, just like the rest of Kings Of Leon’s fans?

It has been more than 20 years since Kings Of Leon – brothers Caleb, Nathan and Jared, and cousin Matthew – was formed, and 18 since their debut, Youth & Young Manhood, brought their southern rock blues to the UK charts. Followill, now 39, says he can “still smell the first bar we played in, still remember exactly the nerves we had” in the beginning.

“They say the older you get the faster it goes and I think that’s the case. I’m not quite an old man yet, but I look back at something like, ‘wow, that was five years ago’. Seems like it was a couple of months.”

Despite finding a following early on in the UK, it took Kings Of Leon’s fourth album, 2008’s Only By The Night, with its monster hits Sex On Fire and Use Somebody, for the band to find massive success on home turf. In a well-trodden rock star path, the pressures of fame took their toll, with Followill infamously leaving a stage in Dallas, Texas, in 2011, reportedly telling fans he was going off to vomit and grab another beer but promising to return. He never did.

After the gig, Jared Followill tweeted to apologise, saying there were “internal sicknesses & problems that have needed to be addressed”.

While life in some ways gets easier the bigger your band becomes – the “hotel rooms become nicer,” for one – Followill says that “mentally, I feel like it does get a little harder at times”.

But they have worked through and here they are now with their eighth album, a record finished just before the coronavirus crisis started to escalate.

“So we sat with it for a year, which is actually kind of nice… to be able to make an album and then not have to go straight into the grind of putting out a record and doing all the promo and then a big tour. That’s a lot of time that would have been away from our families that I think we’re all happy that we got to have.”

The title comes from the first track When You See Yourself, Are You Far Away?, which almost seems prophetic considering the last 12 months, a year in which many of life’s distractions have been paused and we have all had time to stop and reflect.

“It is kind of eerie sometimes when that happens and it’s happened before, you know, that I’ve written something that happens or it seems like I’m writing about something that ends up happening later, and that scared me for a while,” says Followill. “When I first met my wife and our relationship started, I was very in love with her – I still am, obviously – but I never wanted to write, like, a heartbreaking song about losing someone because I was afraid it was going to actually happen.

“And yet, if you sit down and read the lyrics to this album, there are many, many things that jump out and feel so much like they had been written about, you know, the state of the world. But it just happens… that wasn’t the case.”

So what has Followill, having spent so much time at home with Aldridge and their two children, learned about himself in the past 12 months?

“I know there are a lot of people that have had a terrible time with what’s been going on and obviously I don’t ever want to make light of it, but for me, it was actually not so bad. I kind of enjoyed the simple, quiet life. Just hanging with the kids and hanging with the wife, it’s nice.”

After such a huge enforced break, the thought of finally getting back out on a stage in front of thousands of people brings “a weird feeling”.

Followill continues: “I’m nervous, you know, I’m nervous about what it’s going to look like when we actually do play. Is it going to be like riding a bike and everything’s going to feel like it’s back to normal… [there’s] a lot of emotions going on.”

He might have enjoyed the time spent at home, but there’s lots he misses about his rock and roll life.

“I miss the very little mundane things that normally you wouldn’t think about. I mean, I miss being in a crowded airport bar with my flight delayed. You know, little s*** like that sounds like heaven to me.

“When we do walk out on stage, it’s going to be one of those rare moments that the band is as excited as the crowd. I feel like we’re all, even though I’ll be putting a little work in, it’s still going to feel like I’m at a party. To see people be able to let loose and enjoy music and enjoy their time together… that’s something that I don’t know that I’ve ever really felt like that on stage.

“It’s always been more of, ‘all right, I got to get up there and get the job done and make sure I give it 100%’. And sometimes you forget to take it all in. Now, I don’t think that’s going to be the case. I think we’re going to be super excited to see people have a good time…

“I feel like it’s going to be something of an out-of-body experience the next time we play, because I feel like I’m going to be just watching everyone, and I’ll probably mess up a hundred times ‘cus I’m distracted by taking it in.”

When they announced the album release back in January, the band also launched a run of “hero T-shirts”, with all proceeds going to Live Nation’s Crew Nation relief fund for live music crews.

“In the beginning, you know, our first handful of shows, we had two crew members: Our cousin Nacho and our sound guy. And now, there are hundreds of people that are working and we know that… without them, we can’t do what we do. So when this all started, that was the first thing that we talked about: How do we pay our crew? The music industry has suffered from this and… a lot of these people aren’t getting any relief.”

The day after our interview, it is announced that When You See Yourself will reportedly be the first album to be made available as a non-fungible token, a form of cryptocurrency used to hold assets such as art and music, which will give fans special perks such as limited-edition vinyl and front-row seats to future gigs.

Yellowheart, the company behind the tokens, told Rolling Stone the aim is to encourage fans to own music again, rather than streaming it, following the “devaluation of music” over the last 20 years.

With income from live music on pause, the pandemic has really brought the issue of streaming and finances to the fore, with a government inquiry currently under way in the UK, looking into whether artists receive their fare share.

Followill says he is not as knowledgeable about the subject as he would like to be, but was “very much against” the idea of streaming at first. “Just because I was like, you know, I think it’s bulls***. When I was a young man, you go to a record store and you buy a record and that’s how it goes…

“Not everyone is a musician that’s been doing it for 20 years and has a little bit of padding and a little comfort in their lifestyle. So for these young guys and girls that are out there kind of scrapping for it and trying to get their music heard and trying to make money doing it, I don’t know, I feel bad for ’em. I hope that’s something that is addressed and we figure out a way to get people the money that they deserve.”

Eight albums, multiplatinum sales, four Grammys, not to mention marriage and fatherhood – it is not just the way artists earn money that has changed since Kings Of Leon started out. Followill says he can look back on many highlights of his career, but most importantly it led to him meeting Aldridge when the band played the Coachella in 2007, “and that was awesome”.

What about regrets? “Nooo, never,” he laughs. “Sure! F***, a lot, but I wouldn’t change them, I don’t think. I think they are what has shaped me as the man that I am. And without those, you know, it would shift everything. I don’t really feel like seeing what my life would be like if I had made changes. I’d rather just enjoy the life I have.”

Kings Of Leon’s latest album, When You See Yourself, is out now