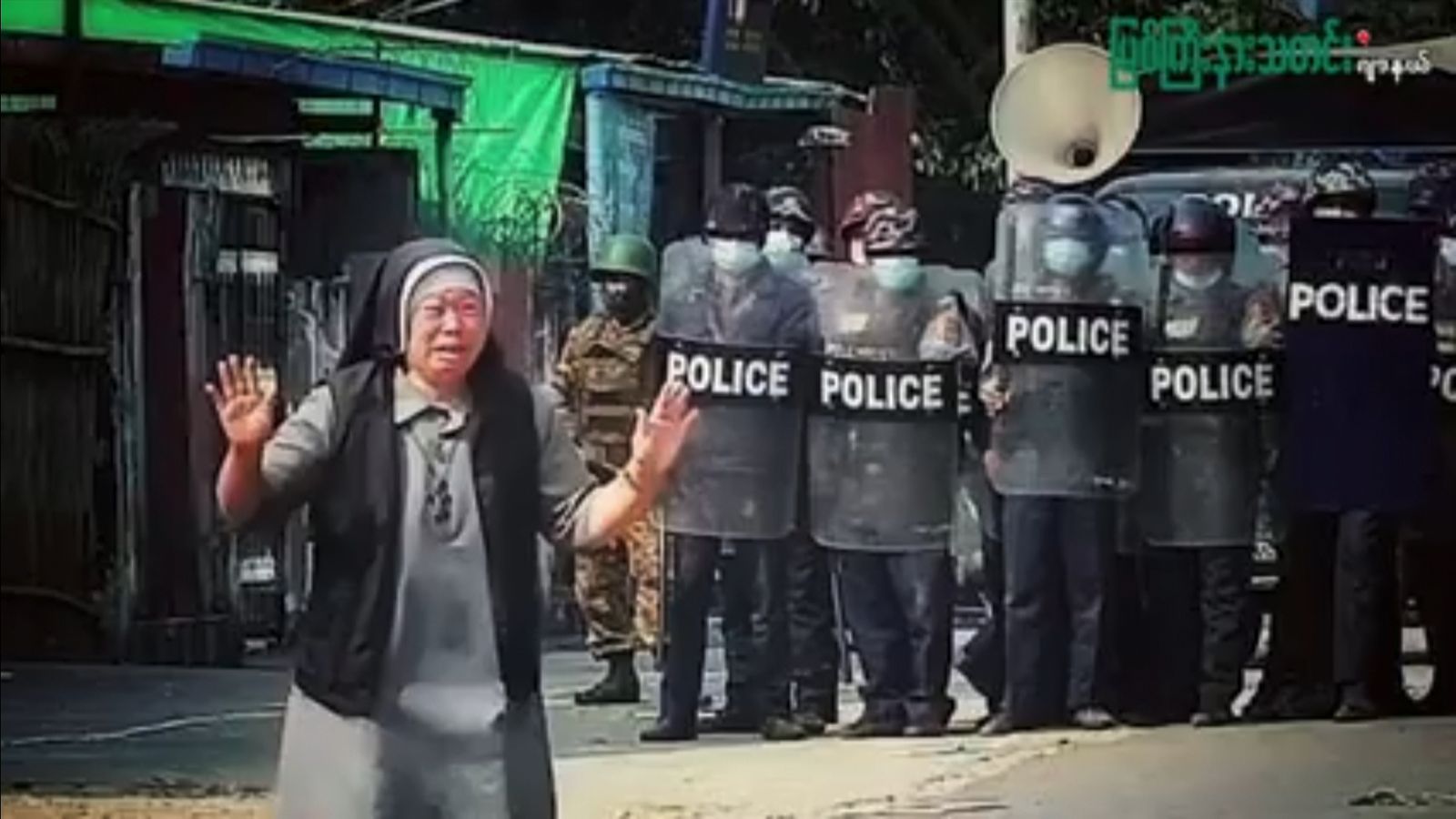 A nun who knelt in front of armed security forces in Myanmar to stop them firing on civilians has said she was prepared to die to save protestors’ lives.

In extraordinary scenes in Myitkyina, Kachin State, Sister Ann Roza Nu Tawng can be seen pleading with police and soldiers not to shoot.

The intervention has been called Myanmar‘s “Tiananmen moment”.

In footage from 28 February, a shot can be heard after a nun is seen walking towards the heavily kitted-out officers.

Sister Ann Roza, 45, told Sky News she thought she would die but was prepared to sacrifice her own life to save others.

This is her story in her own words:

On Sunday, I was at the clinic. I was giving treatment on that day as the other clinics were closed. I saw groups of people marching by. They were protesting.

Then they opened fire and started beating the protesters. I was shocked and I thought today is the day I will die. I decided to die.

I was asking and begging them not to do it and I told them the protesters didn’t commit any (crime).

I was running towards where they were beating the protesters. It was happening in front of this clinic. It was like a war.

I thought it would be better that I die instead of lots of people.

I was crying out loud. My throat was in pain, too. My intention was to help people escape and be free to protest and to stop the security forces.

I asked them not to continue arresting the people. I was begging them. At that time I was not afraid.

If I had been scared and run away, everyone would be in trouble. I was not afraid at all. I was thinking of the girl from Naypyitaw and the one from Mandalay.

I was thinking of all the fallen souls from the country. I was worried what was going to happen to the people of Myitkyina.

When they reached the Banyan tree, I was calling them (the authorities) and telling them: ‘Please kill me. I don’t want to see people being killed.’

I was crying out loud and they stopped for a while.

One came to me and said: ‘Sister, don’t worry so much, we are not going to shoot them.’

But I told him: ‘They can also be killed with other weapons. Don’t shoot them. They are just protesters.’

In my mind I didn’t believe that they were not going to shoot them, as in many places I’ve seen they have shot people dead.

I brought (a protestor) to the clinic and gave him treatment. The police almost captured another one as he had fallen down. I stopped the police and asked them not to continue. That’s why the police didn’t. Otherwise, they would have arrested him and dragged him from there.

I feel like they (the military) are not the guardians of the people as you have seen what’s happening to the people.

People are not safe and there are brutal night arrests.

I felt really sad when I saw the video of a mother of a young one crying next to a dead body.

I also saw an ambulance was destroyed and medics were beaten with a gun.

They are supposed to protect us but our people have to defend themselves. It’s not safe. They (the security forces) arrest and beat those who they don’t like. They kill them.

There’s no one to protect Myanmar people.

People have to defend themselves and help each other.