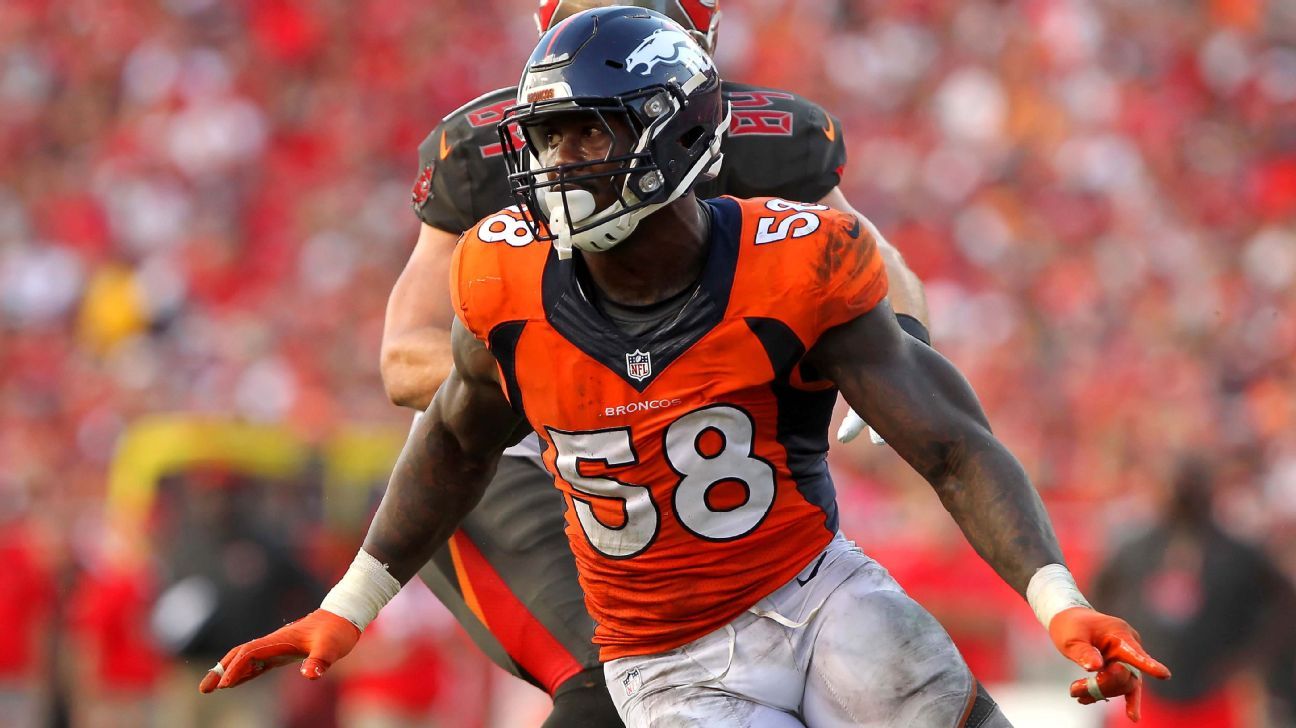 ENGLEWOOD, Colo. — Denver Broncos linebacker Von Miller will not face criminal charges after an investigation by the Parker (Colo.) Police Department earlier this year, according to the 18th Judicial District district attorney’s office.

The office declined to file charges “based on our review of information that is currently available,” according to a statement Friday.

The D.A.’s office said the case did not meet the standards of probable cause of admissible evidence “to support a conviction beyond a reasonable doubt, and that the decision to charge is in the interests of justice.”

The office said it would not comment further on an investigation “in which there was never a citation, arrest or filing.”

Police in Parker, a suburb southeast of Denver, had acknowledged earlier this year that Miller was the subject of an investigation. Miller has not publicly commented on any part of the investigation nor has he responded to requests for comment in recent weeks.

Neither the police nor the the district attorney have said what the investigation was for or what charges Miller could have faced.

On Thursday, Broncos general manager George Paton said the team wanted Miller back for the 2021 season — Miller has an option year in his contract for the season the team must engage — but added he wanted to see the “legal process play out.”

“Obviously it’s a serious situation, but we want to let it play out before we comment on that,” Paton said.

If the Broncos pick up Miller’s option before the start of the new league year they would guarantee $7 million of Miller’s $17.5 million base salary and engage the final year of a six-year, $114.5 million deal he signed in 2016.

Asked Thursday if Miller’s return could also hinge on a salary cut even after the legal process had played out, Paton the team was “still working through that.”

“We want to bring Von back … I don’t want to get into everything, but we want to bring him back,” he said. “Obviously the legal process, what he’s going through, it’s a serious situation, obviously, and I don’t know all the details, but we respect what’s going. We do want Von back.”

Miller, an eight-time Pro Bowl selection and the Super Bowl 50 MVP, missed all of the 2020 season after an ankle injury just days before the season opener. At the time coach Vic Fangio said he had expected Miller to have “a hell of a year.”

Miller’s eight sacks in 2019 was his lowest total since 2013 when he finished with five sacks after serving a six-game suspension for violating the league’s substance abuse policy and then suffering a torn ACL in December of that year.

He is the longest-tenured Broncos player and John Elway’s first draft pick as the team’s top football executive. Elway stepped away from the general manager’s role earlier this year before Paton was hired in January.

Big test for Lib Dems as they attempt to come out of wilderness and take Tory seats
Tim Cook gives clearest hint yet that Apple’s building a headset
‘They’re all terrified’: Patients ‘panic’ as abortion clinic prepares to close
Every new passenger car sold in the world will be electric by 2040, says Exxon Mobil CEO Darren Woods
MLS Watchability Rankings: The most entertaining clubs, and their European equivalents