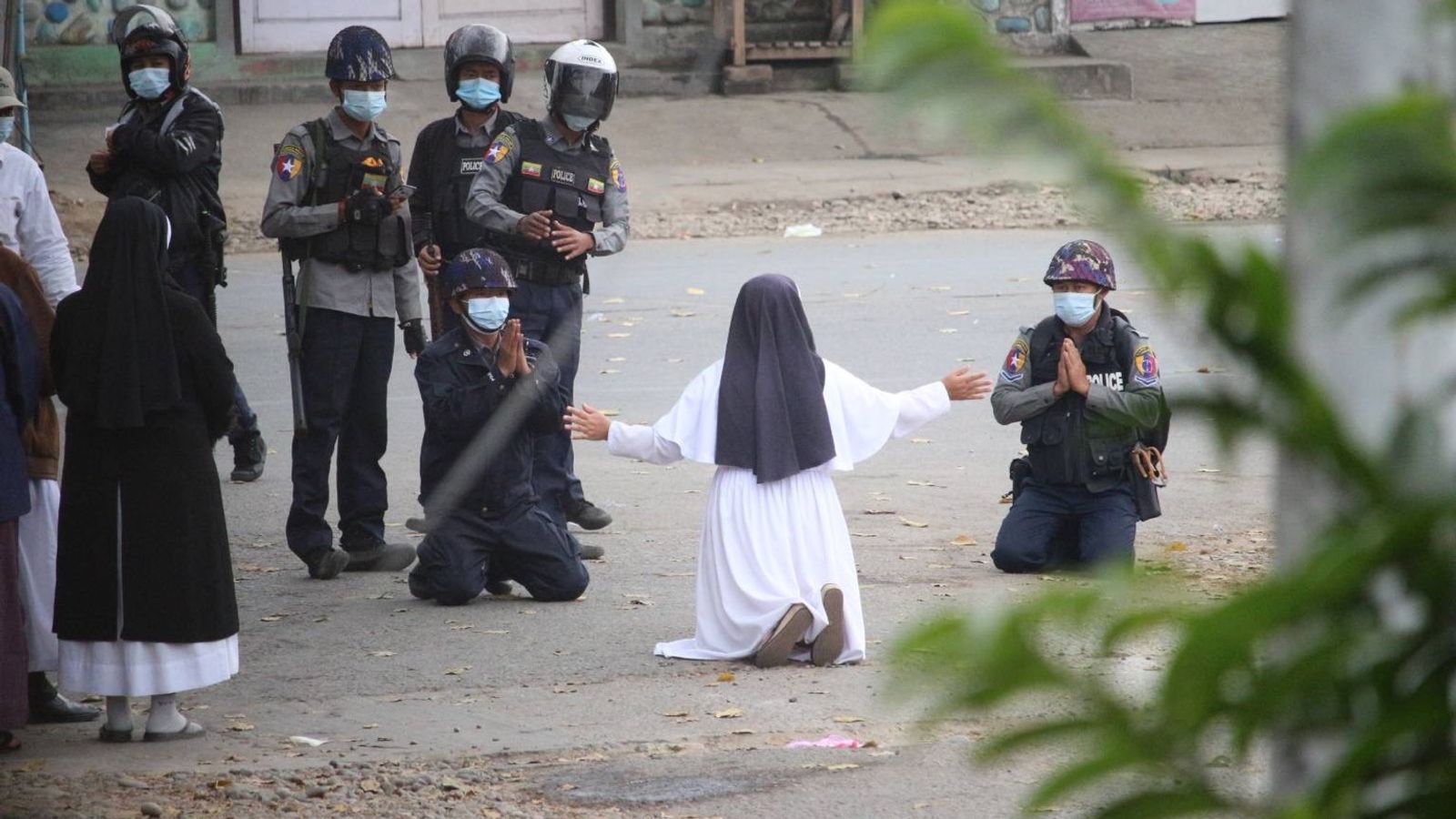 A nun in Myanmar told junta forces “you’ll have to come through me” – moments before they opened fire on protesters.

At least two people were confirmed dead in the city of Myitkyina on Monday following clashes with security forces.

Sister Ann Roza Nu Tawng previously said she was prepared to die to save others after being filmed kneeling in front of armed police in the capital city of Kachin state.

Some have called the scene, on 28 February, Myanmar‘s “Tiananmen moment”.

Dressed in white robes and a dark habit, the 45-year-old was again photographed near protest lines in the city on Monday morning.

Other images show her kneeling in front of police, this time near the Catholic cathedral, as a senior nun looks on.

Recounting the horrifying events of the morning, she told Sky News: “The first time I was pleading with the police not to beat, not to arrest, not to crack down on the protesters, because the protesters were not doing anything bad, they were just shouting slogans.

“And the police told me ‘we are from here, we have to do this. Please stay away from here’.

“I replied, ‘no, if you want to do this you have to come through me!’

“Later the police said ‘we have to remove this barricade on the road’. They then removed the barricade and after a while the protesters returned.

“Then around 12 noon the security forces were about to crack down, so again I was begging with them, I was kneeling down in front of them and I was pleading not to shoot and not to arrest the people.

“The police were also kneeling and they told me they had to do it because this was to stop the protest.

“After that, tear gas was used and I was struggling to breathe and I was dizzy, and then I saw the man who had fallen down in the street and [he had been shot].”

The editor of Myitkyina News Journal told Sky News that, as of lunchtime, at least two people had been confirmed dead.

Distressing photos show Sister Ann Roza standing at the top of the street as protesters run towards the gravely injured person lying in the road.

In another graphic image, she is crying out as she leans towards the body of a man who has been shot in the head.

She said that due to the tear gas she did not see if it was police or military who fired on the protesters, but she hoped it wasn’t the officers she spoke to.

“I am very sad,” she said. “The police told me that they’re not going to crack down or shoot brutally, but finally they did.

“I saw another person who died on the spot and had serious injuries.

“The first person who was shot in the head could still breathe when he arrived at the clinic and the people tried to treat him, but finally he died.”

It is just over a week since Sister Ann Roza was first filmed kneeling in front of police lines in the city as she begged them to refrain from violence.

In an interview with Sky News on Friday, she explained she was willing to sacrifice her own life to protect protesters.

“Then they opened fire and started beating the protesters. I was shocked and I thought today is the day I will die,” she said. “I decided to die. I was asking and begging them not to do it and I told them the protesters didn’t commit any [crime],” she said, crying.

At least 56 people have been killed and 1,790 detained or arrested since the 1 February coup, according to figures compiled by the Assistance Association for Political Prisoners (Burma) .

On Monday, numerous injuries were reported at locations across the country as the military tried to stop the ongoing protests.

At least one protestor in Pyapon, Ayeyarwaddy region, was also killed according to Khit Thit media agency.

Tear gas, stun grenades and live fire have all been used against unarmed civilians in the five weeks since the coup.

Over the weekend, residents in cities including Yangon also reported soldiers shooting tear gas and bullets after dark as terrified residents watched from their homes.

One video sent to Sky News appeared to show forces firing in the grounds around West Yangon Hospital on 7 March.

In another, soldiers are filmed in a residential street as bright flashes light up the sky.

NATO’s expansion is not easing Putin’s paranoia – and dictators cannot afford to lose
PM still has the support of cabinet despite Dowden’s resignation, minister says
Heathrow passenger charge set to fall on orders of regulator
WorldRemit becomes latest fintech to slash jobs as outlook darkens
Every new passenger car sold in the world will be electric by 2040, says Exxon Mobil CEO Darren Woods