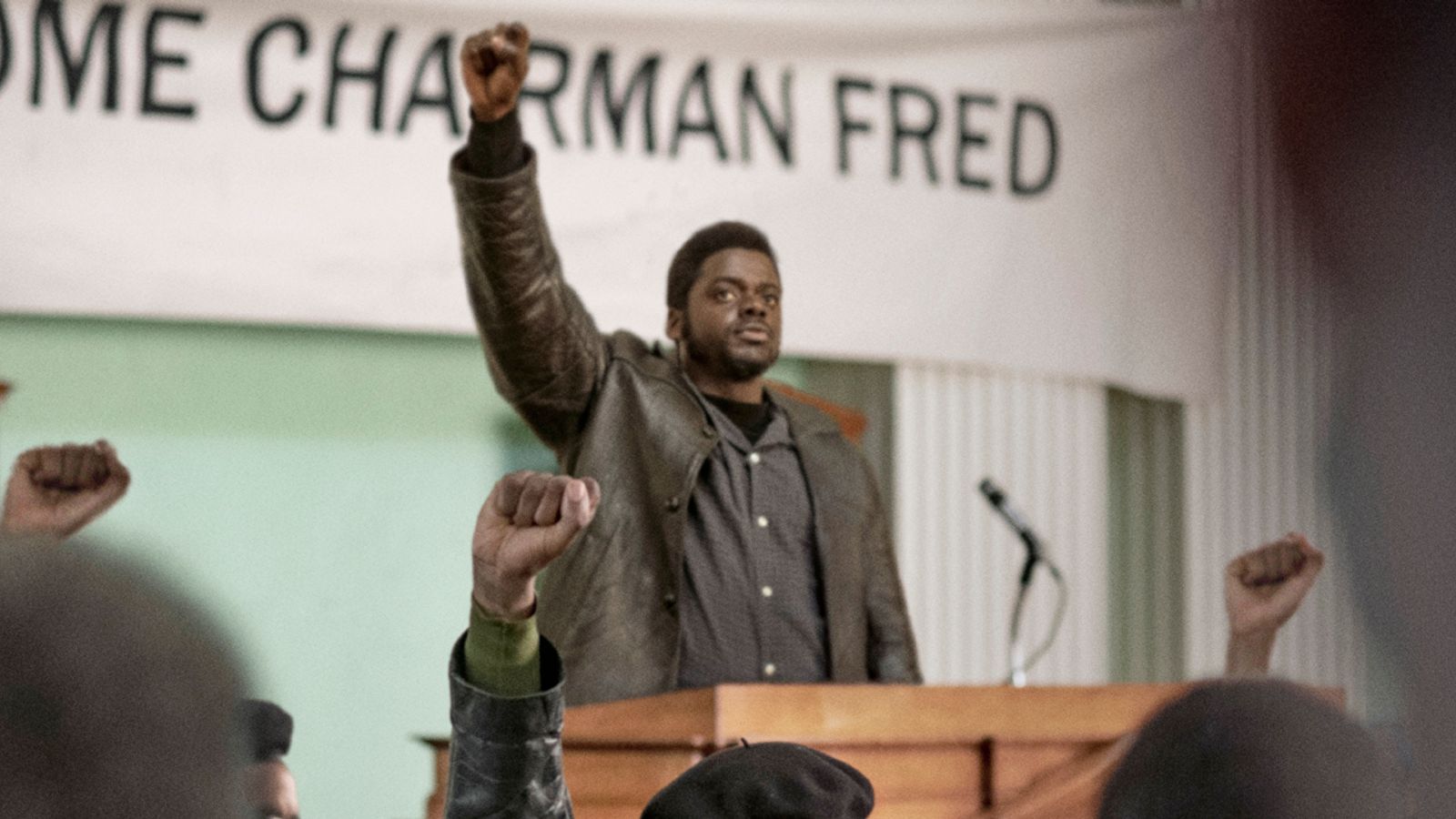 There’s a reason that civil rights activist and Black Panther deputy chairman Fred Hampton’s story is little known, according to filmmaker Shaka King – because it “would contradict everything America represents”.

Judas And The Black Messiah – the director’s first studio feature – is already very much part of the awards conversation, with a Golden Globe and Critics Choice win for one of its stars, Daniel Kaluuya, and nominations in the forthcoming BAFTA and SAG awards.

But King has told Sky News he’s not surprised Hampton’s history hasn’t been widely shared before: “Culturally, folks don’t want to put forth stories about freedom fighters who were assassinated by the US government, because it would contradict everything that this country puts forth to the world about what it represents.

“It would be a slippery slope, because if you told the true story of how the FBI assassinated a 21-year-old black radical, then you’d have to also explain all of the other instances where they did similar things within the nation and across the globe.”

Before Judas And The Black Messiah, King was best known for his indie stoner comedy Newlyweds – a film of a very different sort. And the movie’s produced by Ryan Coogler – the man behind Oscar-winning Marvel film Black Panther.

But for both men, the powerful story of a young black man’s death at the hands of the FBI needed to be told.

The film takes us back to the early hours of 4 December 1969, when 14 police officers stormed Hampton’s apartment, firing 99 rounds, killing him in his bed with two shots to the head at point blank range. A second Panther member, Mark Clark, was also killed.

Hampton’s heavily pregnant wife Deborah Johnson – who was also in the flat at the time of the incident – gave birth to their son, Fred Hampton Jr 25 days later.

As well as his prominent role in the Black Panthers, Hampton had been a community organiser, working to build the Rainbow Coalition in Chicago, setting up breakfast clubs and taking children to swimming pools.

Ironically, from official memos written by J Edgar Hoover at the time, it appears the FBI director was as threatened by the free breakfast programme as any of Hampton’s other activities.

Ahead the film’s production, King spent a year working with Hampton’s fiancee, Akua Njeri (who at the time the film is set was called Deborah Johnson) and his son, Hampton Jr, as cultural advisers for the storyline.

Now active in the Panthers himself as chairman of youth-focused Black Panther Party Cubs, one of Hampton Jr’s stipulations was that he be on set every day, an experience King candidly describes as “difficult for both of us”.

“It took a lot of diplomacy on everyone’s part to really find those points of interest amongst us all. The film you see is a result of that and we’re all happy at the end of the day that it exists in the form it does.”

The director admits he was the most nervous he’s ever been when the family eventually watched the final cut, but relieved they were pleased with what they saw.

British actor Daniel Kaluuya is the man at the heart of the film and the 32-year-old’s portrayal of Hampton has already earned him critical acclaim and multiple awards.

King is clear he was the only man for the job: “I probably wouldn’t have made the movie if we hadn’t been able to cast Daniel.

“He obviously didn’t have to audition – he’s one of the best actors in the world. But I wrote it with him in mind and at no point did I even see anyone else [for the part].”

As for Oscars buzz, King refuses to be distracted by it: “I do my best to ignore it.

“It’s not something that you have any control over… I try to focus as exclusively as I possibly can on the things I have control over.”

And with a new generation who will learn about the Black Panther Party for the first time from his movie, he feels the takeaway message of the film is just one of those things.

King says if people walk away from the film with one insight, he hopes it’s this: “The Panthers led with love – their primary desire was to bring equality and help poor black and brown folks self-actualise.

“And if you look at the historical portrayal of them in movies and in the media [it doesn’t reflect that]. It’s complete propaganda and not true.”

King hopes his film will right that wrong and do justice to a story many feel has been relegated to a footnote in history for far too long.

Judas and The Black Messiah is available to rent at home from Thursday 11 March.

People who plan to travel over Christmas should ‘think carefully’
Former health secretary Matt Hancock will not stand at next election
UK ‘is already in a recession which is expected to last into next year’
Morgan Stanley cuts iPhone shipment estimate by another 3 million units
A globally critical chip firm is driving a wedge between the U.S. and Netherlands over China tech policy