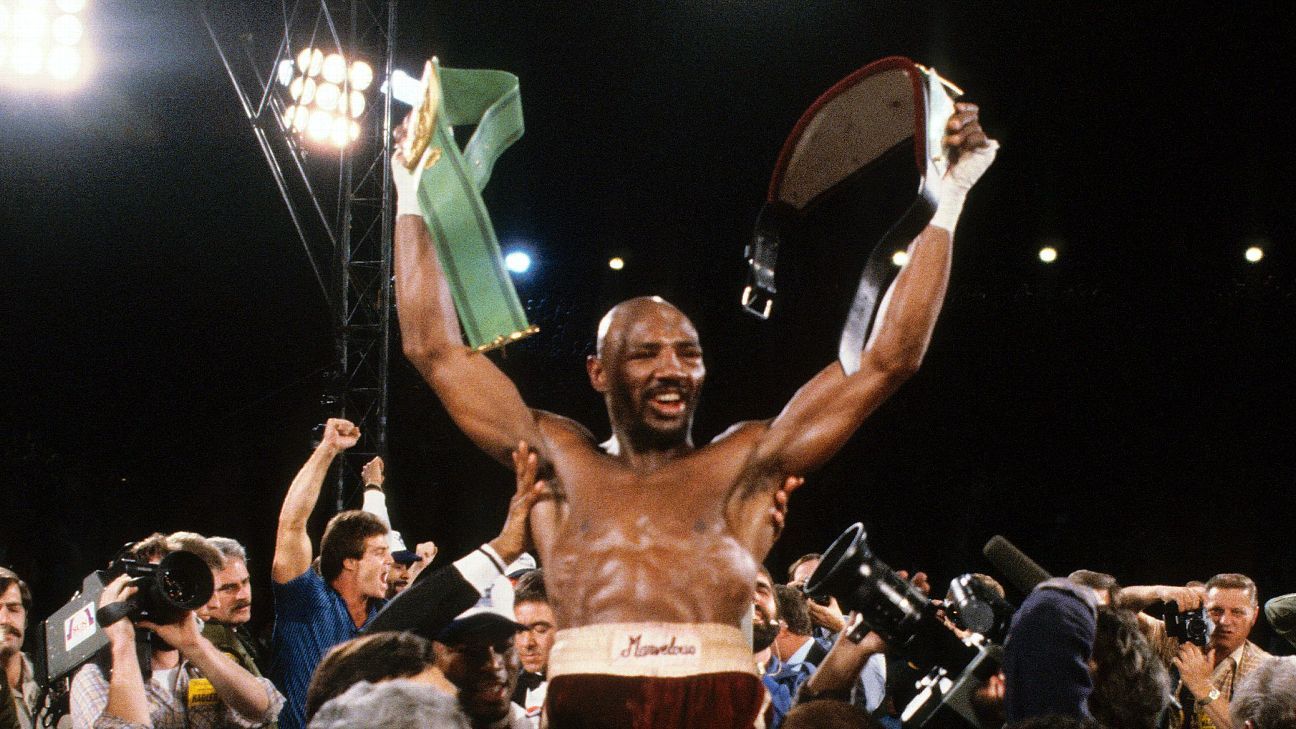 The great fighter retires with his fortune and his faculties intact.

Then he stays retired — resisting the urgings of the promoters, the public and the ferocious power of his own ego that which made him great in the first place.

“When I question myself, as to what the hell was I doing in boxing all these years, I think of Marvin Hagler,” Bob Arum said Saturday, shortly after being informed of Hagler’s passing. “He was the most loyal, dedicated fighter I ever promoted.”

That’s from a man with 55 years in the business, a guy who couldn’t talk Hagler into one more comeback. Not for lack of trying, though, and no matter the price.

Arum recalls being at Caesars Palace in the late 80s. Muhammad Ali was there. Tommy Hearns was there. So were Roberto Duran and Ray Leonard, about a year after Leonard won his controversial decision over Hagler.

“Tell Marvin we should do it again, a rematch,” Leonard told Arum. “We’ll make a fortune. Tell him.”

As Leonard’s logic was unassailable, Arum delivered the message.

Hagler glared down at the promoter. “Tell Ray to get a life,” he said.

No aspersions to the great Leonard, but that’s the hardest part. For fighters, fighting is the easy stuff. Not fighting is harder. Having a life, being happy and healthy and wealthy enough to enjoy yourself after the fighting, is the most difficult proposition of all. And when you assess Hagler’s place in boxing history — the ever-disputed decision to Leonard, the less ambiguous decision over Duran, the stoppages of Alan Minter, Vito Antuofermo, Hearns (watch on ESPN+) and John Mugabi — that should count as his greatest victory.

The Greatest himself couldn’t do it. I remember the first time I saw Ali in person, signing haberdashery at Macy’s. Someone had to wipe the drool from his mouth. It was a terrible thing to see, but even amidst this prolonged celebration of Ali-Frazier’s 50th anniversary, and the remembrance of Ali’s majesty, it’s worth remembering.

Hagler didn’t come back after the Leonard fight.

He didn’t owe the IRS.

Felt no need to sell himself out in an “exhibition.”

He didn’t need to nourish his ego, or mollify his regret. Other people could argue about the meaning of his career, or the Leonard fight itself. Hagler knew what he did. He spoke his piece in the ring in his prime, as it should be. And when he was done, he was done.

Actually, he wanted to be done sooner. “He wanted to retire after Hearns,” said Arum, referring to their three-round standard for concussive title battles. “But he was huge business at the casinos. That was the biggest weekend ever at Caesars Palace.”

Hagler eventually allowed himself to get talked into Mugabi, whom he knocked out in the 11th round. Then, 13 months later — by which time he knew his skills were eroding — it was Leonard.

“I remember driving like five hours with Pat Petronelli, his manager, in the middle of the night,” Arum recalled. “When we finally get to his house in New Hampshire, Pat tells me to wait in the car. He goes to meet Marvin. They talk in this little picnic area on the side of the house. It goes on and on and on and on. Finally, I see Marvin pounding his fists on the table. I’m thinking, ‘this isn’t going so well.’ Then Pat walked back to the car.”

“What was that all about?” asked Arum

“You’re not going to believe this,” said Petronelli, who, along with his brother, Goody, Hagler’s trainer, had offered to cut their fees by 50 percent to make the fight happen.

“What did he say?” asked Arum.

“He said, ‘I don’t know if I’m going to fight this bastard, but if I do you better take your whole fee.'”

As it happened, Hagler got a life, as delightfully reported by Rick Telander in Sports Illustrated. He moved to Milan and became an actor, mostly bad guys in action movies. He still had most of his money, the better part of $40 million, his health and his memories intact.

“I saw Joe Louis at the door at Caesars Palace, just shaking hands, and that left a bad taste in my mouth,” he told Telander. “Then I saw Jersey Joe Walcott doing the same thing in Atlantic City.”

Earlier that year, Hagler traveled back to the States to see his daughter graduate from high school. He ran into Petronelli.

“For the first time in my life, I’m happy with myself,” he told the manager. “I’m retired.”

Even if he was still turning down untold riches for a rematch with Leonard.

“I just got off the phone with Ray,” Arum said Saturday night. “He’s really broken up.”