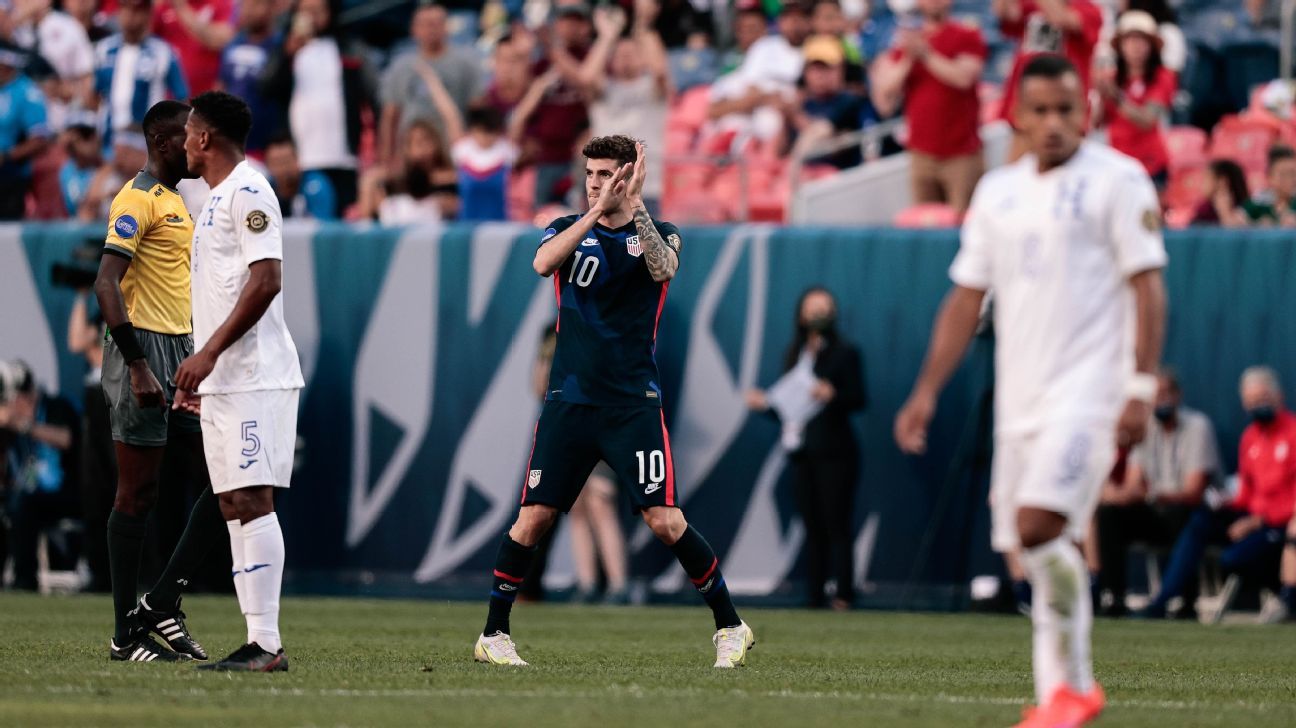 The United States men’s national team, full of talent and confidence after a banner year from their Europe-based players, were given a valuable lesson on Thursday. Things like pedigree and reputation count for nothing when it comes to competitive fixtures in CONCACAF.

The good news is that the U.S. managed to prevail over Honduras 1-0 in the semifinals of the CONCACAF Nations League courtesy of substitute Jordan Siebatcheu‘s 89th minute winner. It’s infinitely more enjoyable to absorb lessons when you win. Now the U.S. will play the winner of Mexico and Costa Rica in Sunday’s final.

But this was a brutal slog of a match, full of the kind of gamesmanship that one would expect from a CONCACAF side like Honduras. There was physical play, tactical fouls, and time wasting with liberal use of the stretcher by Honduras. For players like Christian Pulisic and John Brooks, this was more a refresher. Brooks new exactly what he was in for in the first minute when he tangled with Honduran forward Alberth Elis, and they both got a talking to from referee Oshane Nation. But for the likes of Giovanni Reyna, Josh Sargent and Sergino Dest it was a crash course in the kind of shenanigans they can expect in World Cup qualifying.

“This game is exactly what we needed when you think about the level of competition, the competitiveness of the game,” said U.S. manager Gregg Berhalter. “Some of these guys have never seen that before [in CONCACAF]. So really happy with how they dealt with it. I think the mental side of it to just keep grinding and wearing them down, was really important.”

It started out brightly enough, with Reyna and Pulisic looking sharp in the attacking half. Yet as the game progressed, it was increasingly played on Honduras’ terms, even as the U.S. dominated possession by a 2-to-1 margin. It took a goal line clearance from Sargent of all people to keep the score level in the first half, when goalkeeper Zack Steffen misjudged a cross, allowing Elis to head towards goal. There were other near misses as well, with Honduras looking a consistent threat in transition.

As the second half progressed, Honduras’ desire to kill the game’s rhythm was in full force, and the longer the U.S. went without a goal, the more frustrating it was to watch.

The fact remains, however, that the U.S. didn’t do much to help itself in the face of Honduras’ tactics, mental and otherwise. Set pieces were squandered with poor service by Sebastian Lletget. Passes into the feet of attackers were cut out, though how much of that was on forward Sargent and how much was due to midfielders like Jackson Yueill is open to debate. Overall the U.S. midfield struggled to create chances, with Weston McKennie among those who had a quiet game. Pulisic also suffered through a subdued second half.

McKennie spoke of trying to find “pockets” of space to exploit. But Berhalter acknowledged that too often the U.S. was shunted into parts of the field where Honduras had numbers.

“Honduras was very compact, and they wanted us to play central, and I think we did,” said Berhalter. “Too often, we played central and got turnovers and [Honduras] started transitions I think at times we lacked balance in the midfield. We could have been more stable and draw them out a little bit more and then play behind the backline.”

With 10 minutes remaining, Berhalter finally made his first substitutions of the match, with Brenden Aaronson, Reggie Cannon and Siebatcheu coming in. It seemed long overdue given the extent of the U.S. struggles, but it did pay off. It took a clipped ball from Brooks to McKennie on the right side of the box, and his header across the ball allowed Siebatcheu to score with a header of his own.

Now Berhalter has some decision to make, among them can Yueill handle the defensive midfield duties on his own, especially when opponents are intent on attacking in transition? Based on Thursday’s match, the answer is no. And with Tyler Adams looking more and more like he’ll be unavailable for this competition due to a recurring back injury, the options are either Kellyn Acosta needs to be on from the start, or a player like McKennie needs to be at Yueill’s side. That of course would hobble the attack, but it figures to do more to achieve balance in the midfield. Yunus Musah needs to see more of the field as well.

The forward position is an issue, too. Siebatcheu’s ability to gain separation from his marker on passes played into his feet was a noticeable improvement on what Sargent offered. And when he was presented with a chance, he put it away.

“We know he’s a force on crosses,” said Berhalter about Siebatcheu. “We know he battles in the penalty box, good physicality, and he gave us the edge that we needed.”

One positive is that the U.S. did keep its collective head. There were multiple moments when the match looked like it might boil over, but the U.S. didn’t cross the line into red card territory.

Now the U.S. will prepare for the final on Sunday. It figures to be a more open game, regardless of the opponent. But there was recognition that the performance wasn’t good enough.

“Technically, tactically and just like how we played, we know that it has to be better and we know that we have to put these games away as soon as possible,” said McKennie.

The experience gained on Thursday should help.

Andromeda Galaxy Zoom-Out Video With Over 100 Million Stars Will Leave You Awestruck
Tesla downgrades range of brand new Model S Long Range
Keen on Having a Robo-Dog? Unitree’s Go1 Can Be Yours for $2,700
‘Hammer blow’ as government advised to drop steel quotas
Hydrogen planes, electric propulsion and new regulations: Aviation is changing