At least 44 people have died and more than 70 are missing after record rainfall triggered severe floods in western Germany and neighbouring Belgium.

Forty-two of the fatalities were in Germany, including 18 in the district of Ahrweiler in Rhineland-Palatinate state after the Ahr river burst its banks, bringing down six houses and causing widespread devastation.

Authorities in the district of Euskirchen, in North Rhine-Westphalia state, said 15 deaths had been reported there.

Another nine people died elsewhere in North Rhine-Westphalia, including two firefighters. Also among the nine fatalities were four people who died in separate incidents after basements were flooded in Cologne, Kamen and Wuppertal, where authorities warned that a dam could burst.

In Belgium, two men have died due to the torrential rain, and a 15-year-old girl is missing after being swept away by a swollen river.

Rhineland-Palatinate, where the properties collapsed last night, is among the worst affected areas. Homes have been evacuated within a 50m (164ft) radius of the river.

State premier Malu Dreyer said: “It’s a catastrophe. There are dead, missing and many people still in danger. All of our emergency services are in action round the clock and risking their own lives.”

“I extend my sympathies to the victims of this flood catastrophe,” she added.

Video footage from nearby Bad Neuenahr showed damaged properties, cars and trucks strewn across streets – some perched precariously on walls and fencing, and fallen trees and floating debris.

Reuters said more than 70 people were missing around the wine-growing region of Ahrweiler in Germany, citing police. 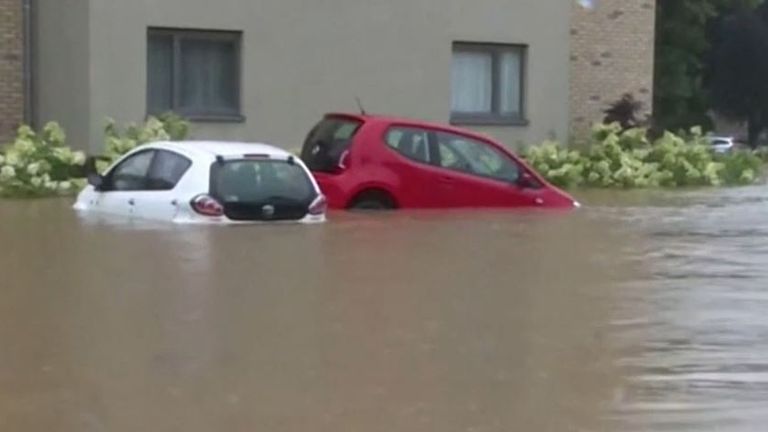 Around 10 houses collapsed in the eastern Belgian town of Pepinster after the Vesdre river flooded and residents were evacuated from more than 1,000 homes.

The extent of the disaster is unclear, with many villages cut off by floodwater and landslides making roads impassable.

Hundreds of soldiers are helping with the rescue efforts – using tanks to clear the roads, while helicopters have been winching those stranded on rooftops to safety. 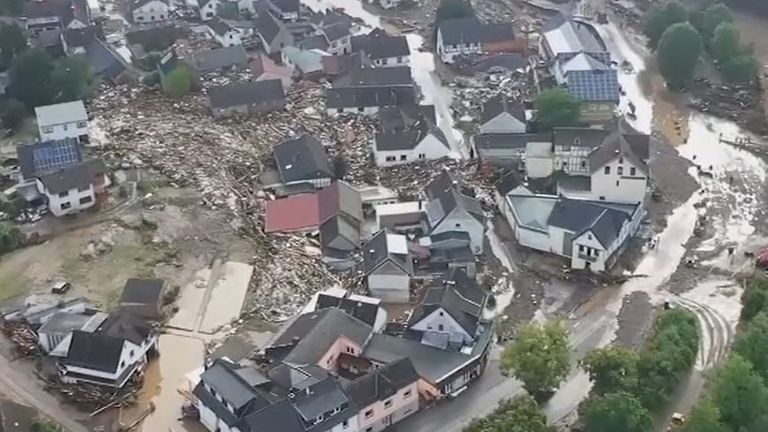 Rescue operations were hampered as phone and internet connections were down in parts of the region, southwest of Cologne.

Some 200,000 properties are also without electricity in Germany, said Westnetz, the country’s biggest power distribution grid company, adding that many substations could not be reached for repairs because roads were still blocked. 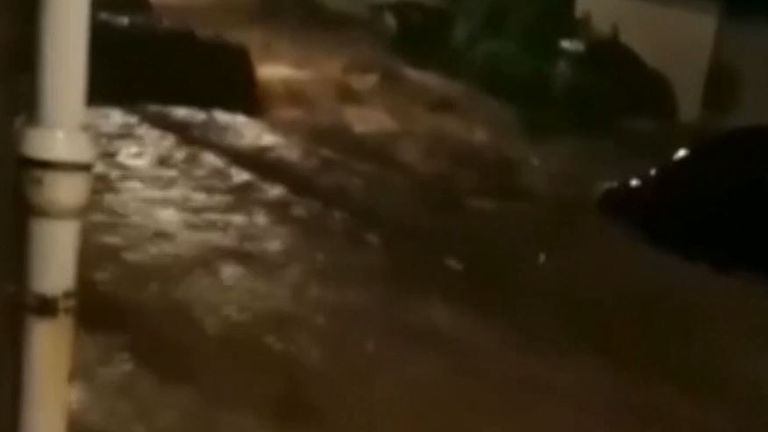 Around 25 more houses are in danger of collapsing in Schuld bei Adenau in the hilly Eiffel region, broadcaster SWR reported.

It described the situation in the rural district of Eifelkreis Bitburg-Prum as “extremely dangerous”, with dozens of people left stranded on rooftops.

Rescuers have become trapped themselves in some parts due to the strong current of the floodwaters.

“There are many places where fire brigades and rescue workers have been deployed. We don’t yet have a very precise picture because rescue measures are continuing,” a police spokesperson said.

Weather experts said that rains in the region over the past 24 hours had been unprecedented.

The Greens political party blamed the floods on global warming, with its parliamentary leader Katrin Goering-Eckardt telling RTL/NTV television: “This is already the impact of the climate catastrophe and this is another wake-up call to make us realise: this is already here.”

A 63-year-old resident told SWR: “I’ve never experienced a catastrophe where the river burst its banks in such a short space of time.”

It comes after the German weather service DWD issued an extreme weather warning for parts of three western states yesterday, and the army was deployed to help stranded residents, transport evacuees and fill sandbags as rivers burst their banks.

Two firefighters died in the Sauerland region, northeast of Bonn, on Wednesday.

One had drowned and a second collapsed after a rescue operation, according to the DPA news agency.

Hagen, a city of 180,000, declared a state of emergency yesterday after the Volme river burst its banks.

Floodwaters caused the lifts to fail in a hospital, and a care home had to be evacuated.

Residents were also told to leave a district of the regional capital Duesseldorf, a major business centre.

The deluge of rain and flooding has disrupted rail, road and river transport, with shipping suspended on the Rhine river.

Further rainstorms are expected to hit southwestern Germany today, and could continue until Friday night, forecasters have warned.

“We see this kind of situation only in winter ordinarily,” Bernd Mehlig, an environment official from North Rhine-Westphalia, the most affected region, told broadcaster WDR. “Something like this, with this intensity, is completely unusual in summer.”

The torrential downpours also extended into France, Luxembourg and the Netherlands too.

Flooding in 2002 killed 21 people in eastern Germany and more than 100 across the wider central European region.

Medical Breakthrough Shows TSLP Cytokine Protein Could Help Lose Weight by ‘Sweating’ Fat
Lib Dems demand recall of parliament for vote on ‘deceitful’ and ‘botched’ vaccine passports plan
Lions’ Sinckler cited for biting South Africa player
Mercedes-Benz to unveil EQE, first AMG electric, and several new EVs at IAA
‘What connects us is so much greater than what divides us’: Matt Damon on challenging his own perceptions in new role