Maintaining unity between Western allies will “require a lot of effort” in light of an unfolding rift between France and members of a new security partnership, Germany’s ambassador to the UK has said.

Andreas Michaelis was responding to France recalling its ambassadors to the US and Australia, after the latter’s government ditched a multi-billion dollar deal with Paris for new nuclear submarines and decided to instead buy ones made with US technology.

The response to the cancelled agreement – resulting from something that has been dubbed the AUKUS partnership, between Australia, the UK, and US – has been described by Sky’s security and defence editor Deborah Haynes as “one of the gravest rifts among allies in living memory”.

The new 🇩🇪 government to be elected on 26/9 will be faced with important strategic discussions. The AUKUS debate illustrates this vividly. 🇩🇪 has always aimed for coherence&unity of the West. It became part of our DNA during the Cold War. This unity will require a lot of effort. https://t.co/nmNEwk6hYP

It comes as Germany’s long-standing chancellor, Angela Merkel, is due to be replaced next weekend by whoever wins federal elections.

Mr Michaelis, referencing Deborah Haynes’ Sky News analysis, said on Twitter: “The new German government to be elected on 26/9 will be faced with important strategic discussions.

“The AUKUS debate illustrates this vividly. Germany has always aimed for coherence&unity [sic] of the West. It became part of our DNA during the Cold War. This unity will require a lot of effort.”

The decision to pull out its representative in the US, outlined last night by foreign minister Jean-Yves Le Drian on the orders of President Emmanuel Macron, was the first time France has ever recalled its American ambassador.

He said the cancellation by Australia of the big contract to buy French conventional submarines in favour of nuclear-powered subs built with US technology was “unacceptable behaviour”.

Australia said on Saturday morning it regretted that France was recalling its ambassador, adding that it valued the relationship with France and would keep engaging with Paris on other issues.

A US State Department spokesperson said France was a “vital ally” and the United States would be engaged in the coming days to resolve the differences.

A French foreign ministry statement did not mention the UK, but a diplomatic source said France believed Britain’s joining of the deal was opportunistic.

🇬🇧🇺🇸 are close friends and allies. Great speaking to @SecBlinken on issues including:

🤝Welcoming our new AUKUS partnership 🇬🇧🇺🇸🇦🇺
🇦🇫 Continuing to work together on Afghanistan
🌏Working to deepen trade and security partnerships with our allies pic.twitter.com/giwqWb08ax

After what is believed to be her first call to US Secretary of State Antony Blinken as the UK’s new foreign secretary, Liz Truss didn’t specifically mention the escalating row in a tweet discussing what the pair talked about.

She did say however that they had both welcomed their “new AUKUS partnership” and talked about future efforts “to deepen… security partnerships with our allies”.

The AUKUS partnership is part of a new strategic Indo-Pacific alliance between the US, Australia and Britain, US President Joe Biden announced last week. 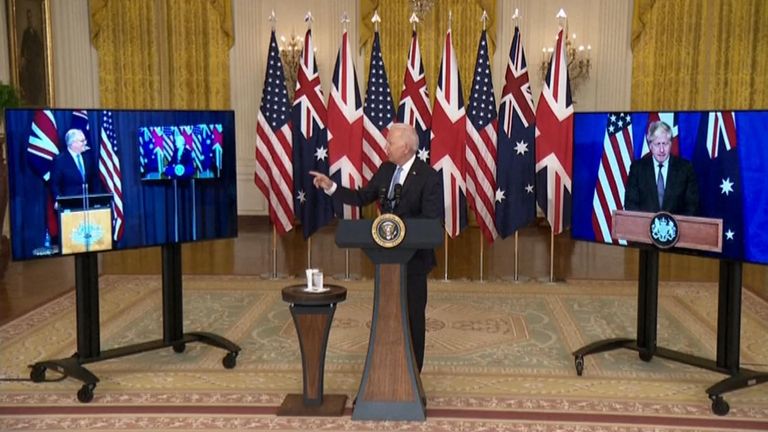 French President Emmanuel Macron has so far not commented directly, but on Friday a top French diplomat spoke anonymously of a “crisis” in relations with the US.

He said that for Paris “this is a strategic question concerning the very nature of the relationship between Europe and the United States about the Indo-Pacific strategy”.

He added that Australia never mentioned to France its wish to shift to nuclear-powered submarines, including during a meeting between Mr Macron and Prime Minister Scott Morrison.

The French diplomat said that Mr Macron received a letter from Mr Morrison on Wednesday morning announcing the decision to cancel the submarine deal.

After the deal was announced, Mr Le Drian told franceinfo radio it was a “brutal, unilateral and unpredictable decision” reminiscent of the sort of actions Donald Trump would take.

He said: “I am angry and bitter. This isn’t done between allies. It’s a stab in the back. We created a relationship of trust with Australia, and that trust has been broken.”

The “landmark” UK, US and Australia partnership aims to boost defences and share nuclear submarine secrets at a time of growing concern over China.

China has condemned the agreement, saying the Western powers’ cooperation in nuclear submarines “severely damages regional peace and stability” and “jeopardises the international efforts in promoting the non-proliferation of nuclear weapons”.

London, Canberra and Washington have said they will seek to collaborate in cyber, quantum technologies and artificial intelligence, as well as other underwater capabilities.

Vestas to install prototype of world’s ‘tallest and most powerful wind turbine’ in 2022
Bucks raise title banner, open with rout of Nets
Passengers watched woman being raped on train and did nothing, US police say
Hamas warns Israel another war is inevitable unless it ends occupation of Palestine
Gas prices are at a seven-year high and expected to keep rising. How to save at the pump