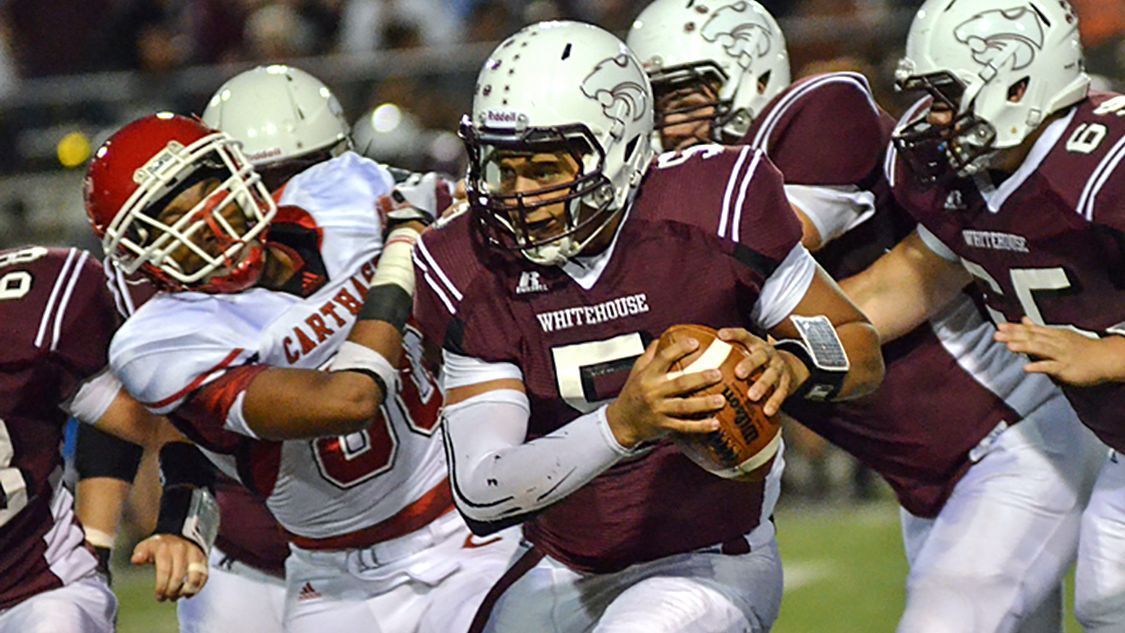 Mahomes’ last pass, with his team frantically trying to score the winning touchdown in the final minute of a 2013 Texas state playoff game, bounced off the hands of a receiver and into those of a defender. Despite Mahomes throwing for more than 600 yards and leading his team to 60 points, the Whitehouse Wildcats lost by five points.

Mahomes took a couple of days to heal his wounds, mostly emotional, but by the following Monday he was back at school. This time, he had his basketball gear in tow and was ready for a new season in a different sport.

“Patrick played a lot of different games in high school in a lot of different sports and he didn’t lose very many of them,” said Adam Cook, Mahomes’ high school football coach. “So many times we had seen Patrick in those games right at the end coming through in the clutch and making plays. Everybody in the stadium that night thought that was going to happen again. It didn’t, so how was Patrick going to handle that?

“But Patrick has always had this ability to keep his eyes ahead. He was always chasing that best version of himself. He understood that losing games, even the way we had lost that one, was part of the process. Nobody wants to lose, but somebody does, every time.”

Mahomes’ ability to rebound from his biggest disappointments — both in high school and college — might be instructive this season as he faces the roughest stretch of his professional career. His Chiefs lost Super Bowl LV to the Tampa Bay Buccaneers to end last season, failing to score a touchdown for the first time with Mahomes as their starter. A 2-2 start to the 2021 season is not up to the Chiefs’ usual standards.

Now they face the Buffalo Bills, the team they beat in the AFC Championship Game to reach last season’s Super Bowl, on Sunday night (8:20 p.m. ET, NBC). Mahomes has played well — especially against the Philadelphia Eagles in Week 4, when he threw five touchdowns — but hasn’t always delivered the big plays Chiefs fans are accustomed to seeing.

He has thrown at least one interception in three straight games, the second-longest streak of his career. His poor decision in Week 3 to force the ball to Travis Kelce in a tie game with less than 2 minutes left resulted in a Los Angeles Chargers interception and eventually a Chiefs loss. But Mahomes has shown the ability to fight through tough times before.

“He’s resilient,” said Eric Morris, Mahomes’ offensive coordinator in college at Texas Tech. “We lost a number of games where we put up 45, 50 points and were just outscored. But that never seemed to faze him. Every time the other team would score a touchdown, he’d be on the sideline telling everyone, ‘Let’s go score another one ourselves.’ That’s just how he’s driven. That’s just his personality. He doesn’t get down about these types of setbacks.”

Blame for the Super Bowl LV loss can hardly be placed at the feet of Mahomes. The Chiefs’ offensive line was in tatters — with three opening-day starters on injured reserve and two potential replacements having opted out for COVID-19 reasons — and they were overwhelmed by the Bucs’ defensive front.

Against the Bucs, Mahomes was forced to scramble 497 yards before throwing a pass or being sacked, according to the NFL Next Gen Stats. That was the most for a quarterback in any game during the 2020 season. On top of it all, Mahomes played with a severe case of turf toe that would require surgery shortly after the game.

Mahomes said the 31-9 loss would motivate him for the rest of his career. Not long afterward, as if to prove it, he was in coach Andy Reid’s office taking accountability for what happened in the Super Bowl.

“He had things he wanted to work on that he wanted to get better after we did the offseason film study,” Reid said. “He was eager to get in there and attack that, and I thought he did a good job of it.”

Mahomes’ offseason was complicated by the surgery. He had to stay off the foot for a time, and the initial plan was for him to skip participation in the early portion of offseason practice but be a limited participant by the end.

He was on the field when practice started in May, though, taking every snap that the starting quarterback normally would.

“He was out there from the start when he didn’t have to be, when he was still rehabbing from the surgery,” backup quarterback Chad Henne said. “That shows what his motivation was.”

“It helped in the sense that when I didn’t feel like working out some days, I made sure I gave my best effort,” Mahomes said. “You have those days when you’re working out a lot and you’re tired. Having a game like that to look back on to remind you why you’re doing it definitely helped.

“It wasn’t just the fact we lost, but we didn’t play the way we can play. All that hard work you put in throughout the entire season to get to that final game, to be on that stage and not play the game we know how to play, it stings. But that’s sports. That’s football.”

Disappointment ran similarly deep in his team’s locker room after Mahomes’ last game at Whitehouse High in Texas. It was the Wildcats’ first loss of the season after 12 wins. Everyone, including Mahomes, was sorting through the emotions.

Then one of Mahomes’ teammates, another senior, threw his helmet in frustration.

“Patrick had tears in his eyes,” Cook said. “But he went over to the kid and told him to pick up the helmet and said, ‘We don’t conduct ourselves like that. That’s not what we do.’ Even in that moment — his last high school game, an interception at the end — he still just knew what to do. He still had that composure.”

At Texas Tech, Mahomes was a part of some high-scoring games, but he and the Red Raiders didn’t always keep up with opponents. During his final season in 2016, though, they always seemed to bounce back after a big defeat.

One week Mahomes and Texas Tech scored just 17 points during a loss to West Virginia despite entering the game averaging more than 50 points per game. Mahomes’ next game was a 66-59 loss to Baker Mayfield and Oklahoma in which Mahomes threw for 734 yards — still tied for the most passing yards during a single game in college football history.

As a pro, Mahomes has continuously found a way to dig the Chiefs out of a hole, even on the biggest stages. During the 2019 playoffs alone, the Chiefs trailed 24-0 to the Houston Texans before winning 51-31 and trailed 17-7 to the Tennessee Titans in the AFC Championship Game before winning 35-24. Then in Super Bowl LIV, Kansas City trailed 20-10 with less than 10 minutes to play against the San Francisco 49ers before a 31-20 victory to claim the Lombardi trophy.

To Morris, it isn’t a coincidence Mahomes responds well in tough situations.

“Just with his competitive spirit and nature, he was always someone that next week of practice after games like that, he just seemed like he was a little bit more focused, a little bit more into it and in tune to the details,” Morris said. “When times would get tough, he had the ability to turn it on and have that laser-sharp focus all the time. He wouldn’t let his personality show so much at times like that. He wouldn’t be as playful or jokeful. He’d lock it in and try to bring everyone with him.

“Adversity is something he meets head-on. He’ll attack it and kind of go into almost a different mode.”

Fearless on the field

Morris said he never saw that side of Mahomes as much as he did during Texas Tech’s 2015 Texas Bowl game against LSU.

“LSU was so good defensively,” Morris said. “I think they had five or six guys from that defense still starting in the NFL. Their speed was crazy.”

The game was similar to last season’s Super Bowl in that Mahomes’ protection broke down repeatedly and he was under pressure on almost every pass attempt. He made a number of his now-common off-schedule throws to keep the Red Raiders in the game.

LSU put its best cornerback, Tre’Davious White, on Tech’s best receiver, Jakeem Grant. White was later drafted in the first round by the Bills, but Mahomes wasn’t willing to concede the matchup. 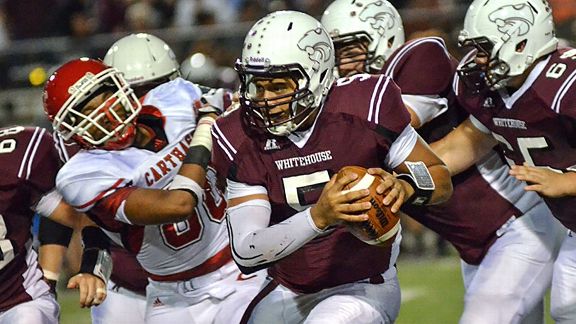 “On the sideline, Patrick looked at Jakeem at one point early in the game and said, ‘Please tell me you can outrun him,'” Morris said. “Jakeem told him he could, and Pat told him, ‘OK, next time they go man-to-man coverage and he’s on you, it’s coming to you.’ Patrick wanted to use our best and fastest receiver. He wasn’t going to not throw to him just because LSU had its best corner on him.”

Sure enough, Mahomes on the next drive threw to Grant, who beat White for a 46-yard touchdown catch. LSU, though, went on to win the game.

Mahomes has plenty of advantages with the Chiefs that he didn’t have in college, most notably a talented group of pass-catchers, including Tyreek Hill and Kelce, and a rebuilt offensive line. He’s 40-10 after 50 games in the NFL, and only Hall of Famer Ken Stabler has a better QB record through 50 starts during the Super Bowl era.

He’s no longer the underdog. But the Chiefs expect him to bounce back from last year’s Super Bowl and some early-season struggles the same way he always has.

“Knowing Patrick like I do, I think he’s going to take the disappointment of the Super Bowl and raise his game to another level,” Chiefs chairman Clark Hunt said. “He obviously had the rehab that he was working through in the offseason, but he was there for every OTA, really was 100% available during the OTAs, and I know he was eager to get here and to get camp going because he’s looking forward to getting back on the field. Just that type of mentality, the type of competitor he is, I think he’ll use the experience and be better for it.”