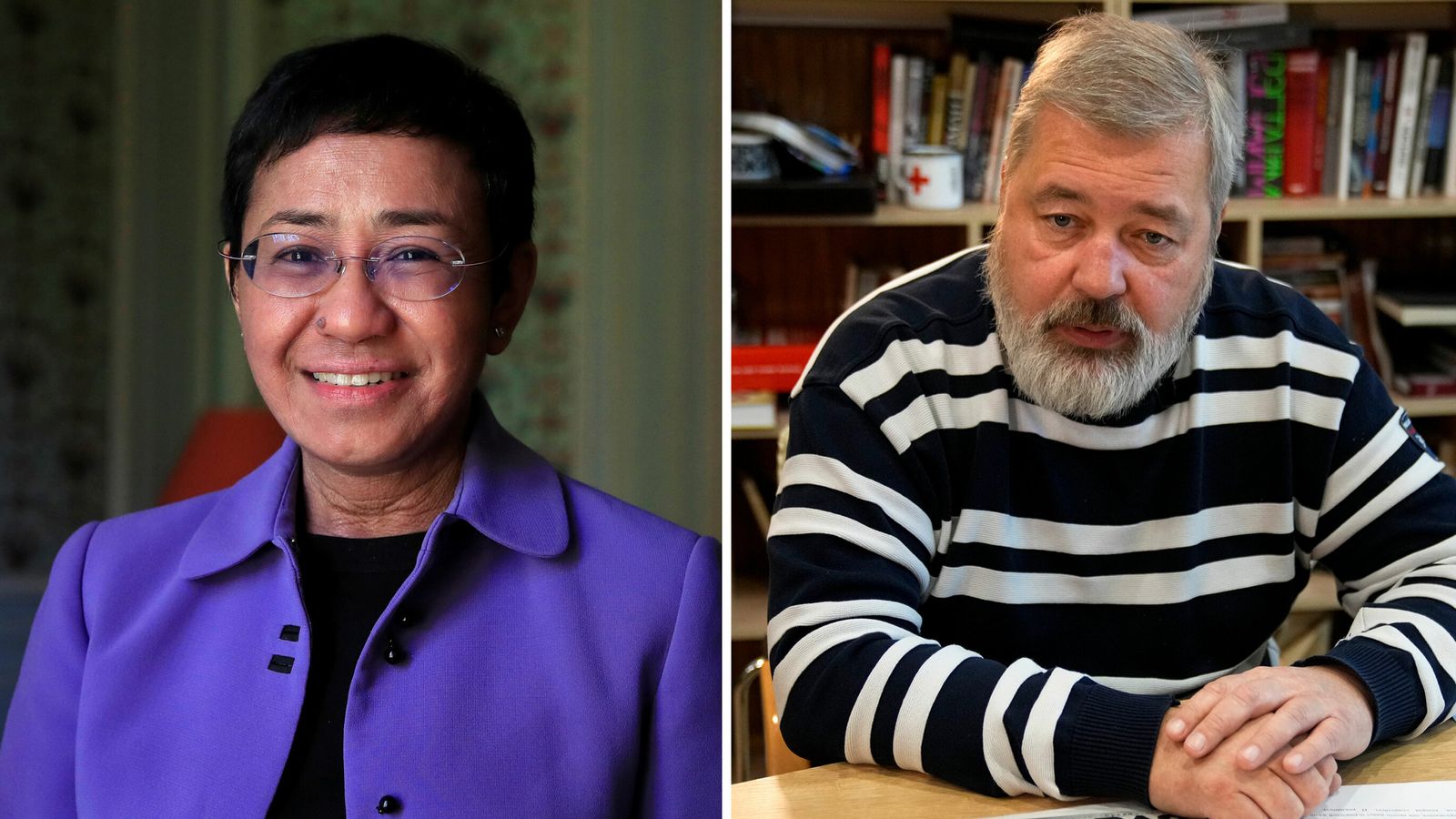 The Nobel Peace prize has been awarded to two journalists who have championed press freedom against authoritarian regimes.

Maria Ressa is a leading reporter in the Philippines who has been previously honoured for fighting disinformation and attacks on the free press.

Dmitry Muratov is editor-in-chief of Novaya Gazeta, an independent newspaper in Russia, which has run investigations on corruption, human rights violations and abuse of power.

Ms Ressa co-founded Rappler – a independent news website – in 2012. She was praised by the Nobel committee for using it to expose the growing authoritarianism and violence of President Rodrigo Duterte’s regime and his “murderous anti-drug campaign”.

She and Rappler “have also documented how social media is being used to spread fake news, harass opponents and manipulate public discourse”, the committee said.

BREAKING NEWS:
The Norwegian Nobel Committee has decided to award the 2021 Nobel Peace Prize to Maria Ressa and Dmitry Muratov for their efforts to safeguard freedom of expression, which is a precondition for democracy and lasting peace.#NobelPrize #NobelPeacePrize pic.twitter.com/KHeGG9YOTT

Since the start of Novaya Gazeta six of its journalists have been killed, but under Mr Muratov’s leadership it has continued to report on subject rarely mentioned by other media.

“Novaya Gazeta is the most independent newspaper in Russia today, with a fundamentally critical attitude towards power,” the Nobel committee said.

The winners were announced on Friday by Berit Reiss-Andersen, chair of the Norwegian Nobel Committee.

She praised the pair for their “courageous fight” to protect freedom of expression in their respective nations.

“At the same time, they are representatives of all journalists who stand up for this ideal in a world in which democracy and freedom of the press face increasingly adverse conditions,” she added.

Ms Ressa reacted to the news of her win in a live broadcast hosted on Rappler.

Novaya Gazeta published a statement on their website on news of the win.

Mr Muratov’s achievement was also referenced by a Kremlin spokesman who said: “We can congratulate Dmitry Muratov… He persistently works in accordance with his own ideals, he is devoted to them, he is talented, he is brave.”

The award is intended to honour an individual or organization that has “done the most or the best work for fraternity between nations.”

This year’s favourites had included the World Health Organisation for its work combating COVID; Greta Thunberg for her climate change advocacy; and the imprisoned Putin critic Alexei Navalny.

Last year it was given to the World Food Programme “for its efforts to combat hunger… its contribution to bettering conditions for peace in conflict-affected areas.”

The winner of the prestigious award is given a gold medal and 10 million Swedish kronor (£836,660).

The prize money comes from a request left by the prize’s creator, Swedish inventor Alfred Nobel, who died in 1895. It will be presented on 10 December on the anniversary of his death.

On Monday, the Nobel Committee awarded the prize in physiology or medicine to Americans David Julius and Ardem Patapoutian for their discoveries into how the human body perceives temperature and touch.

And on Tuesday, the Nobel Prize in physics was awarded to three scientists whose work helped to explain and predict complex forces of nature, including expanding our understanding of climate change.

Benjamin List and David W.C. MacMillan were named as laureates of the Nobel Prize for chemistry on Wednesday for finding an easier and environmentally cleaner way to build molecules that can be used to make compounds, including medicines and pesticides.

The Nobel Prize for literature was awarded to UK-based Tanzanian writer Abdulrazak Gurnah, who was recognised for his “uncompromising and compassionate penetration of the effects of colonialism and the fate of the refugee.”