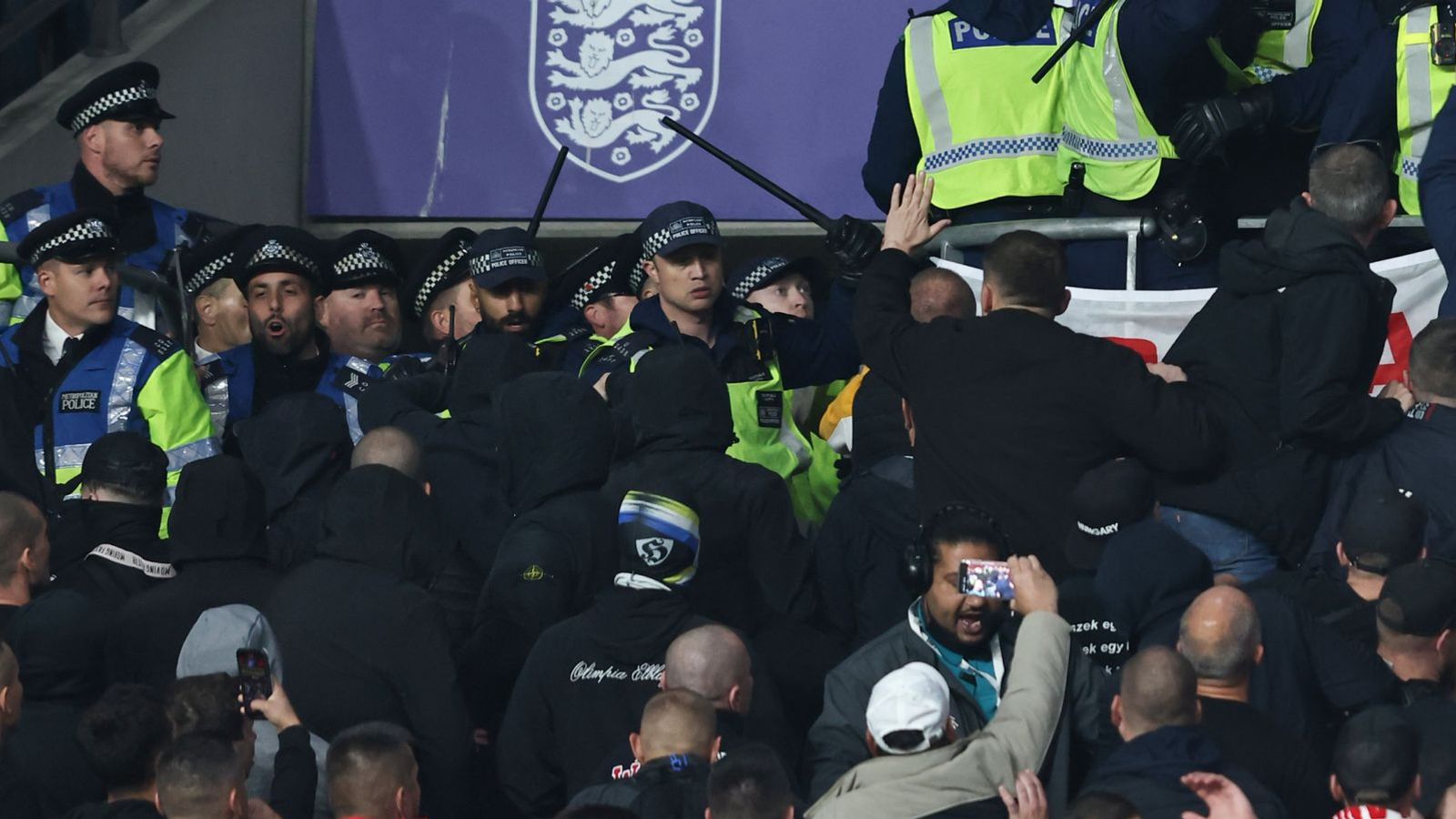 Clashes have broken out between Hungary football fans and police during England’s World Cup qualifier at Wembley Stadium.

The violence began after officers entered the away stand to make an arrest.

The Metropolitan Police said as they made the arrest – over alleged racist comments towards a steward – “minor disorder broke out involving other spectators”.

“Order was quickly restored and there have been no further incidents at this stage,” the force tweeted.

The incident happened shortly after the start of the game in northwest London.

Jeers were also heard at the away end as England players took the knee before kick-off.

Sky Sports’ Peter Smith, at Wembley, said: “Someone in the Hungary section held up an anti-taking-a-knee banner as the players made those symbolic gestures.

“In contrast, the England supporters applauded the players’ action.”

An FA spokesperson said: “We are aware of an incident in the away section during tonight’s FIFA 2022 World Cup qualifier at Wembley Stadium.

“We will be investigating and will report the incident to FIFA.”

The visiting fans, many of whom live in the UK, jeered England taking the knee as the game was about to start.

It was just a minute or two after kick-off when Met Police officers moved in to arrest one of the Hungarian fans for allegedly shouting racist abuse at a Wembley steward.

The arrest in the stand provoked a violent reaction with Hungarian fists flying towards police officers who scrambled to get their riot helmets on.

For five minutes the brawling continued until officers restored calm and the Hungarian troublemakers returned to watching the match.

After the chaos at Wembley for the Euro 2020 final in July it is the last thing the FA want to see.

This though was entirely down to the visiting fans who have built their “don’t care” reputation over many years now.

The trouble comes after monkey chants were aimed at England duo Raheem Sterling and Jude Bellingham in last month’s 4-0 win in Budapest.

Tuesday evening’s match saw Hungary take the lead through a first-half penalty, with fans in the away end letting off a flare in celebration.

But manager Gareth Southgate’s men equalised through John Stones in the 37th minute. The match ended 1-1 after a goalless second half.

England are currently four points clear in their World Cup qualifying group, with just three fixtures left to play, but can’t guarantee their place in the Qatar tournament until next month.

Ex-Theranos project manager testifies that Elizabeth Holmes told him to conceal parts of testing lab
‘Big gap’ remains between UK and EU over NI Protocol – Frost
Coal is ‘king’ as gas prices soar, Total CEO says — and it’s backfiring on cleaner energy goals
It isn’t just the UK that’s suffering supply chain issues. In the US, the crisis may last until the summer
Manchester Arena victim who could have been saved was ‘badly let down’, family say