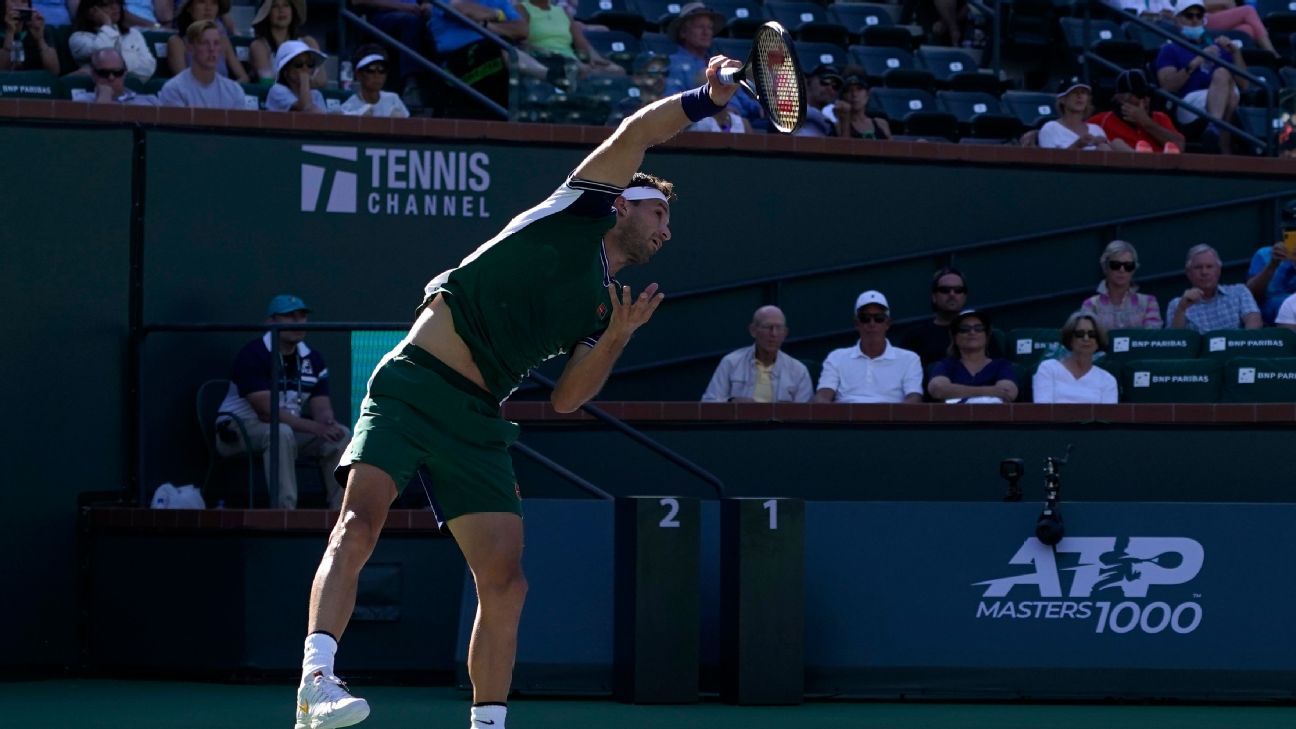 INDIAN WELLS, Calif. — Grigor Dimitrov outlasted top-seeded Daniil Medvedev 4-6, 6-4, 6-3 Wednesday in the fourth round of the BNP Paribas Open, extending the parade of upsets that has knocked out several top players.

Medvedev’s loss left the combined ATP and WTA tournament without its top two men’s and women’s seeds. Karolina Pliskova lost in the third round, and No. 2 Iga Swiatek went out in the fourth round.

Dimitrov rallied from a set and double-break down to upset Medvedev, the US Open champion who was chasing his fifth title of the year. Dimitrov, seeded 23rd, earned his first win over a Top-2 player since 2016, when he beat Andy Murray in Miami.

No. 2 Stefanos Tsitsipas and No. 3 Alexander Zverev played night matches in the Southern California desert.

Dimitrov reached the quarterfinals at Indian Wells for the first time, where he’ll meet No. 8 Hubert Hurkacz, who beat 19th-seeded Aslan Karatsev 6-1, 6-3.

“I always wanted to do well out here,” Dimitrov said. “I felt like I had so many chances throughout the years. I’ve lost very close matches, matches from match points and everything. I was very determined.”

Medvedev won the US Open last month and was chasing his fifth title of the year. He took control from the start, connecting on 80% of his first serves in the opening set. The Russian built a 4-1 lead in the second set before Dimitrov began turning the match around in front of a sparse crowd.

“He definitely flipped the switch,” Medvedev said. “If he plays like this like he did starting from 4-1, he’s going to win the tournament.”

Dimitrov ran off five straight games to take the second set and even the match. The Bulgarian charged the net and closed out the match on Medvedev’s forehand that sailed long.

“He’s been the guy that has been playing the best out of everyone and always finding a way,” Dimitrov said. “It was a great, great match for me to win. But that’s not the end. That’s just another match at the same time. I got to stay focused and I got to look what’s ahead of me and move forward.”

Medvedev fell to 18-2 in North America over his last five tournaments. He won in Toronto, reached the semifinals in Cincinnati, won the U.S. Open and then helped Team Europe beat Team World in the Laver Cup in Boston. He is 50-11 in matches this year, and is re-considering his plans to play in his hometown of Moscow next week.

“I really want to do, but yeah, I need to take care of my body,” Medvedev said. “I did feel exhausted this tournament.”

In women’s quarterfinals, former world No. 1 Victoria Azarenka beat American Jessica Pegula 6-4, 6-2. Azarenka, the 2016 tournament champion, next plays the winner of a night match between No. 24 Jelena Ostapenko and American Shelby Rogers.

Attendance is limited to 60% capacity at Indian Wells Tennis Garden because of the coronavirus pandemic, which forced the tournament to the fall from its usual March date on the calendar.

Also reaching the quarterfinals were No. 11 Diego Schwartzman, No. 21 Cameron Norrie, No. 29 Nikoloz Basilashvili and American Taylor Fritz.

After the gas crisis, the Arctic could be Russia and Europe’s next flashpoint
Astros’ Baker: ‘Heavy accusations’ by White Sox
Ex-Theranos project manager testifies that Elizabeth Holmes told him to conceal parts of testing lab
Time will tell if Chelsea’s win was title-worthy or not
Hungary football fans clash with police at England game