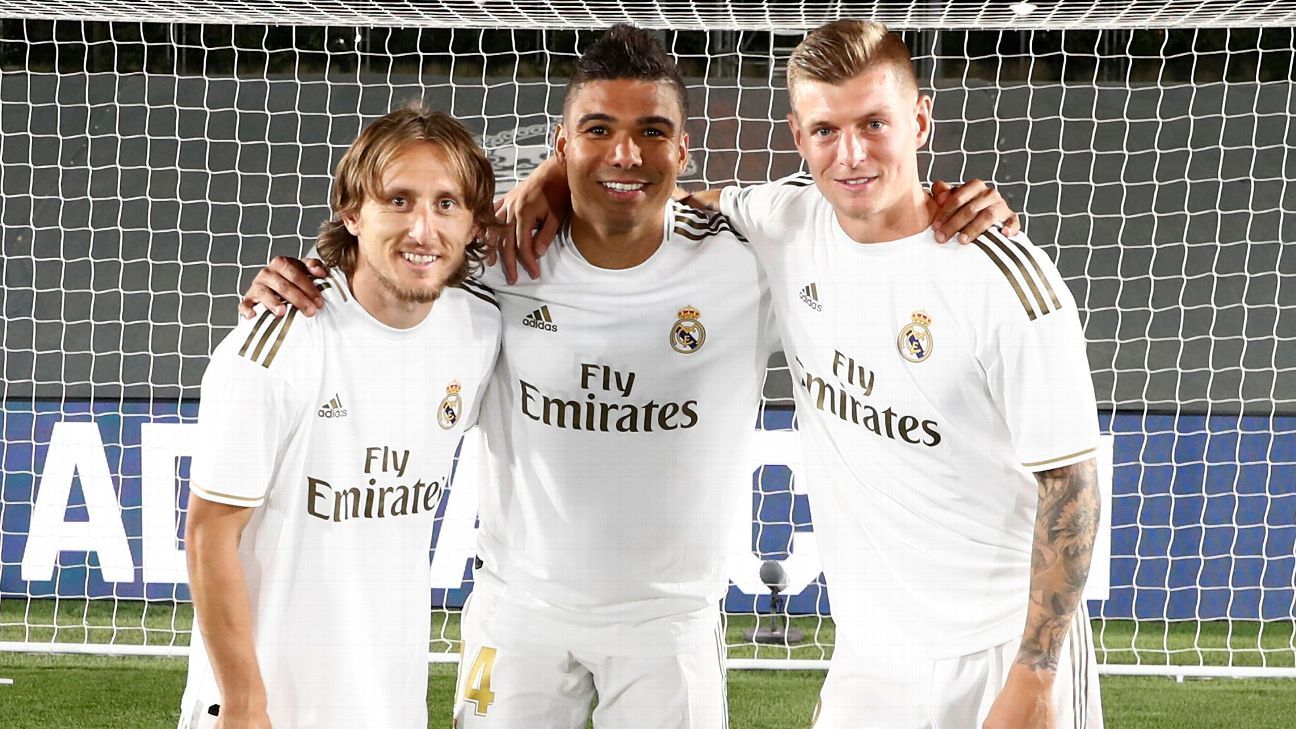 When Carlo Ancelotti described Real Madrid‘s three regal midfielders, ahead of Wednesday’s crucial Champions League revenge match against Sheriff in Tiraspol, he was actually speaking for every confused kid who’s ever asked his parents “Why do racehorses wear blinkers?” or “Who’s that guy wielding a small stick and waving his arms around in front of the orchestra?” At one stage or another, as inquisitive youngsters, we’ve all wondered why it’s necessary to restrain natural talent.

The horse that runs like the wind, muscles rippling, ears pinned back, tail like a kite on a blustery day, but wearing big leather flaps on the side of its head that look incongruous and as if they might drive the creature daft with irritation. The superb, well-tuned 100-piece philharmonic orchestra made up of world-class violinists, flautists, pianists, vibrant strings, a brass section strong enough to blow the head off a pint of Guinness from 50 metres, towering timpanists and percussionists whose every cymbal crash can give you concussion. Why the heck do they need someone with arms flailing like a nutty professor strutting in front of them and bossing them about?

Neither of those ideas seem to make any sense. Leave a thoroughbred stallion alone and he’ll romp home past the field, right? Let the musicians follow the sheet music and peerlessly beautiful sounds will echo around the concert hall — unaided. Sadly, life’s not that simple.

Great racehorses can get distracted by the hubbub to either side of them. And if blinkers give them tunnel vision, they run straight — no energy wasted criss-crossing back and forth across the track. Even the greatest musicians, without the conductor’s baton prodding them, might slide into interpreting how they think Mozart should be played. If the cornet and the piccolo go in one direction but the piano and drum a couple of semi-breves in the other, sooner or later there will be a very critical requiem for Mozart’s Requiem.

However, Italian coach Ancelotti happily admits that he’s a football libertarian. He’s from the school of “If it ain’t broke, don’t fix it.” He watched his heavenly trinity of Luka Modric, Casemiro and Toni Kroos destroy another domestic rival on Sunday, then argued that those three don’t require blinkers, orders how to make sweet music or practically any interference at all. Six goals and assists between them in the past three matches support his claim.

Ancelotti explained his position like this: “The level at which Kroos and Modric continue to play is extremely high. In my opinion they remain the best two midfielders in the world. But at this stage I must admit that all three of them, including Casemiro, constantly do things which surprise me; things I’ve never asked them to but which they come up with innately.

“They’ve got the kind of overall quality which is hard to explain properly, particularly the way that they constantly interchange positions and responsibilities during a match. Sometimes Luka drops to pick up the ball, sometimes Kroos. Casemiro, in theory the defensive organiser, might push forward to help the attacking move — so you won’t catch me interfering and ordering them how or where to move in a match.”

Beaten Granada coach Robert Moreno watched Madrid’s free-spirited freestylers rip his team to shreds and emphasised that: “Give Kroos and Modric time and space in which to think and you’ve already lost the game.”

If you watched Los Blancos stick four past Granada, Ancelotti’s words make total sense. But if you’re a devoted disciple of coaches like Unai Emery, Luis Enrique, Rafa Benitez, Pep Guardiola, Antonio Conte or Julen Lopetegui, you’ll already be sneering. Those six (who’ve won 77 trophies between them) and many others from the “My team, my rules” school of thinking do not believe in Ancelotti’s “you won’t catch me interfering and ordering them how or where to move in a match.”

Ancelotti, Zinedine Zidane and Vicente del Bosque are the doves: give great players the right environment and then let them do their thing. They rest the lightest of hands on the tiller.

The sextet? They are the hawks, those who believe that millimetres make a universe of difference when it comes to winning or losing, who believe that they — not the players — know best, that football is a systems game.

They are coaches who not only intervene in training, and bawl out a guy whose body position or tactical position is wrong by a few centimetres, but who’ll also grab hold of any of their stars (even a Kroos or Modric equivalent) and physically haul them into a position or roughly turn them so that they’re facing the ball or a teammate in precisely the manner the coach has already ordered them to use. Guys like these theatrically demonstrate their belief that the more you shout, gesticulate, remonstrate, cajole and control your players during the heat of battle, the more likely you are to win.

Up and down they leap, as if the insides of their shoes have upturned nails in them, ranting and raving at players who, at best, are pretending to hear and obey but who, more likely, can’t hear a damn word “the boss” is trying to communicate via manic miming and harsh words drowned out by 60,000 fan voices.

Between these two camps there’s no inherent right and wrong. Yet it seems clear that the “leave the top guys to do their stuff” approach, one that has brought coaches like Zidane, Ancelotti and Del Bosque the small matter of 10 LaLiga and Champions League titles at Madrid alone, is not only a rare luxury but a dying art.

Modric, Casemiro and Kroos have the privilege of massive football intellects, years learning each other’s thought patterns by heart and a fanbase that yearns not only for victory but style, panache and five-star entertainment.

Often the (needless) debate about who was better: Xavi, Sergio Busquets and Andres Iniesta or Modric, Casemiro and Kroos, is raised by fans or the football media. Vote whichever way you wish, but the fact is that for all the brilliance of the three Spaniards, they played — for Barcelona, at least — a highly regimented, intricately structured brand of systems football within which they could invent and create.

One (Madrid’s midfield) is all Robin Williams, stream-of-consciousness improvisation; the other (Barca’s trio) the Marx Brothers. It looks like daring high-wire invention, but it’s all scripted and rigorously planned — although some ad-libbing is allowed.

One of the reasons why Zidane would likely be the wrong choice for Manchester United — much though anyone who loves football will yearn to have him back in the game soon — is that while he’s talented and smart, the Old Trafford squad desperately needs detailed orders, a clear-cut philosophy that will restore their confidence, rules that make squeezing out the massive talent in that team easier. What they need is an interventionist, intense coach. This isn’t the time for his “light hand on the tiller and full steam ahead, lads!”

And while Ancelotti has strong justification for devolving huge responsibility to Modric, Casemiro and Kroos, there are problems. Just like the orchestra full of individual brilliance but no conductor, there’s no telling when beautiful harmony will be shattered by a wrong note or someone who hasn’t quite kept up the precise tempo.

Ancelotti also postulated that “the next 10 years are covered for Madrid’s midfield” thanks to young, athletic and hugely promising talents like Eduardo Camavinga, Federico Valverde and Antonio Blanco. What they represent, and what the old guard don’t have (given that their combined age is 96), is the capacity to marry tremendous technical skills with relentless, hungry athleticism. In due course, thanks to their emerging talents, Madrid will be able to exhibit muscular power with, and without, the ball.

Right now, however, Los Blancos are not only a little over-reliant on these three behemoths, Ancelotti is allowing them to dictate how Madrid play. Their personal importance grows but the importance of systems football, where quality players are at least close to interchangeable, diminishes.

This week Madrid have to go and win in Tiraspol: a five-and-a-half-hour journey each way to face a team that produced one of the great modern Champions League shocks by winning at the Bernabeu in September. Winning is within Madrid’s locker. And unless any of them — unbeknownst to us — picked up an injury this week, victory can be carved out by the Casemiro-Kroos-Modric trio.

But look at the next 15 days facing Ancelotti & Co.: Following the tiring Tiraspol test it’s Sevilla and Athletic Bilbao (at home), Real Sociedad (away) plus Internazionale and then Atletico Madrid (at home). All-time greats though this midfield trio are, they simply cannot carry Madrid through those five crucial matches in 15 days without rest and rotation.

So when Ancelotti takes back control of his midfield, with some or all of the big three benched, or rested altogether, can he orchestrate enough from the distinctly underutilised understudies Isco, Camavinga, Valverde, Blanco, Lucas Vazquez and Marco Asensio? Will he be punished for the libertarian “talent knows best” approach that brings such highs and lows. It’s going to be fascinating to find out.

Britons must brace for ‘very unpleasant period’, former Bank of England governor warns
Tesla Model Y caught on fire while driving; driver claimed to have to break window to get out
I go everywhere in my city by electric vehicle, yet I don’t own an electric car. Here’s how I do it
Bruce Willis’s wife reveals ‘toll’ on mental health after Die Hard star’s aphasia diagnosis
Russians have turned to a deadly tactic to advance in the Donbas and the intensity is merciless