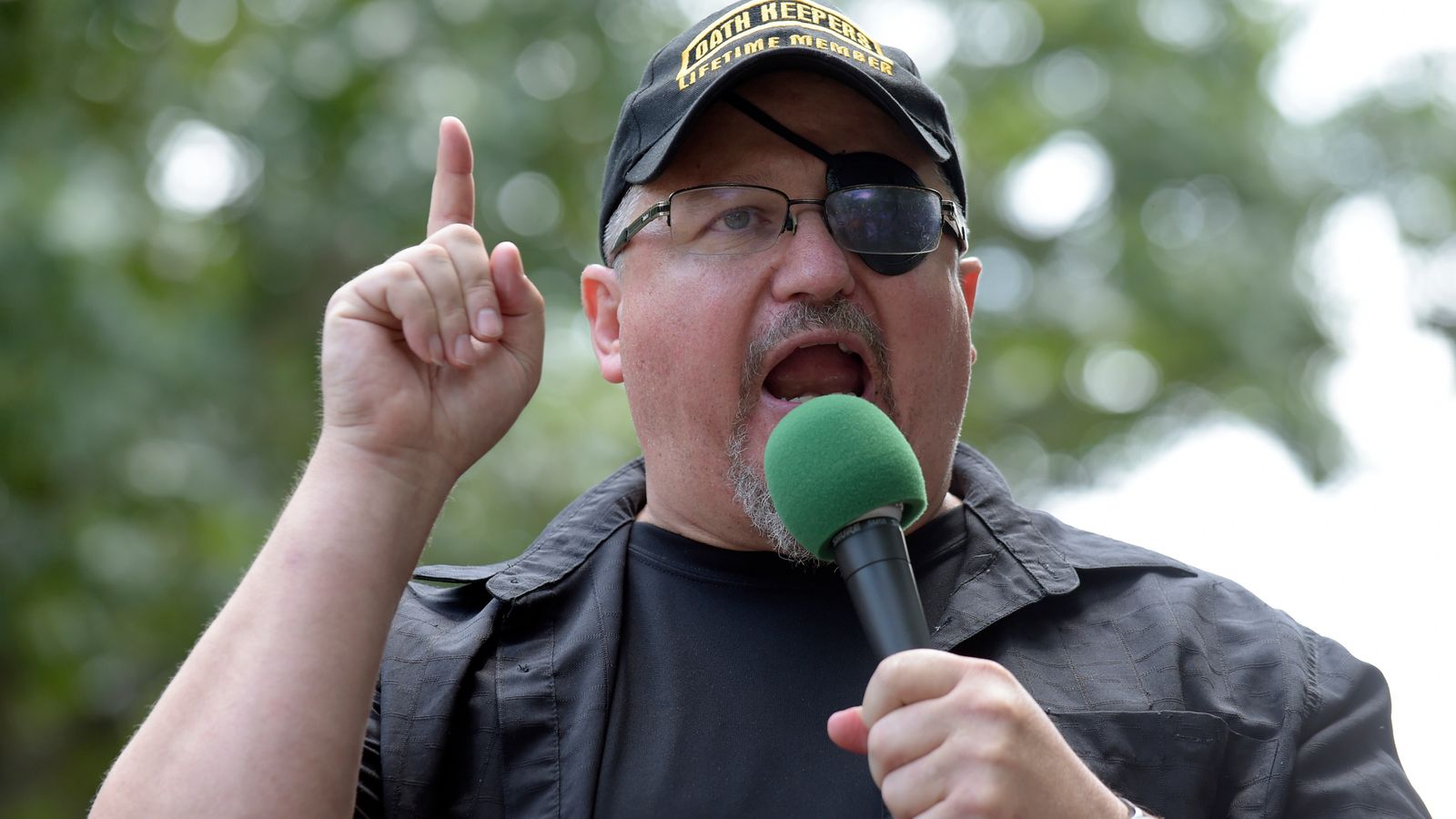 The leader of a far-right militia group has been charged with seditious conspiracy following last January’s attack on the US Capitol.

The charge, which alleges the group attempted to overthrow the government, is more serious than the lower-level crimes others have faced and brings with it a 20-year prison sentence.

More than 150 people have been charged with assaulting police, and over 50 charged with conspiracy – mostly linked to another far-right group, the Proud Boys.

However, now 11 members of the Oath Keepers militia group are the first to have been arrested and charged with seditious conspiracy, including founder and leader Stewart Rhodes, 56, of Granbury Texas.

What is seditious conspiracy?

Seditious conspiracy is when two or more people conspire to “overthrow, put down to destroy by force” the US government or to oppose by force to try and prevent the execution of any law.

If convicted, it carries a sentence of 20 years behind bars.

But the Civil War-era charge is rarely used, because it is difficult to prove and harder to win.

The last time prosecutors brought a seditious conspiracy case was in 2010, in an alleged Michigan plot by members of the Hutaree militia to incite an uprising against the government. But the judge ordered an acquittal at trial, saying it had not been proved the accused ever had detailed plans for a rebellion.

Among the last successful convictions for seditious conspiracy followed the 1954 storming of the Capitol by four Puerto Rican nationalists who opened fire on the house floor, wounding five.

Sky News last spoke to Rhodes in September 2020 after armed civilians took the streets in the wake of the death of Breonna Taylor.

At the time Rhodes said his anti-government group had taken to the streets to “protect businesses”.

Among the Oath Keepers charged alongside Rhodes is Jessica Watkins, 39, of Woodstock, Ohio.

Special correspondent Alex Crawford spoke to members of the group following last year’s attack, and a friend of Watkins said she considered herself a patriot who had done no wrong.

“Jessica at no point was in an area not open to the public,” her friend said.

“She stopped individuals within her sphere of influence from smashing or stealing.”

Former marine Donovan Crowl, 51, of Cable, Ohio has also been charged with seditious conspiracy. In 2021, his mother, Teresa Rowe, told Sky News she had been estranged from him for several years, having kicked him out for his right-wing views.

“I think he should face jail time,” she said.

The indictment alleges Oath Keepers discussed for weeks their plans to overturn the election results and prepared for a siege by purchasing weapons.

They repeatedly wrote in chats about the prospect of violence, and Rhodes allegedly wrote in one text he wanted “to scare the s*** out of” Congress.

The indictment against Rhodes alleges Oath Keepers formed two teams, or “stacks”, that entered the Capitol.

The first stack split up inside the building to separately go after the House and Senate. The second stack confronted officers inside the Capitol Rotunda.

Outside Washington, the indictment alleges, the Oath Keepers had stationed two “quick reaction forces” that had guns “in support of their plot to stop the lawful transfer of power”.

According to court documents, Rhodes said: “We’re going to defend the president, the duly elected president, and we call on him to do what needs to be done to save our country. Because if you don’t guys, you’re going to be in a bloody, bloody civil war, and a bloody — you can call it an insurrection or you can call it a war or fight.”

More than 70 defendants remain detained on riot charges. Around 183 have pleaded guilty to riot-related charges and at least 78 of them have been sentenced – including 35 people who received jail or prison sentences or time already served.