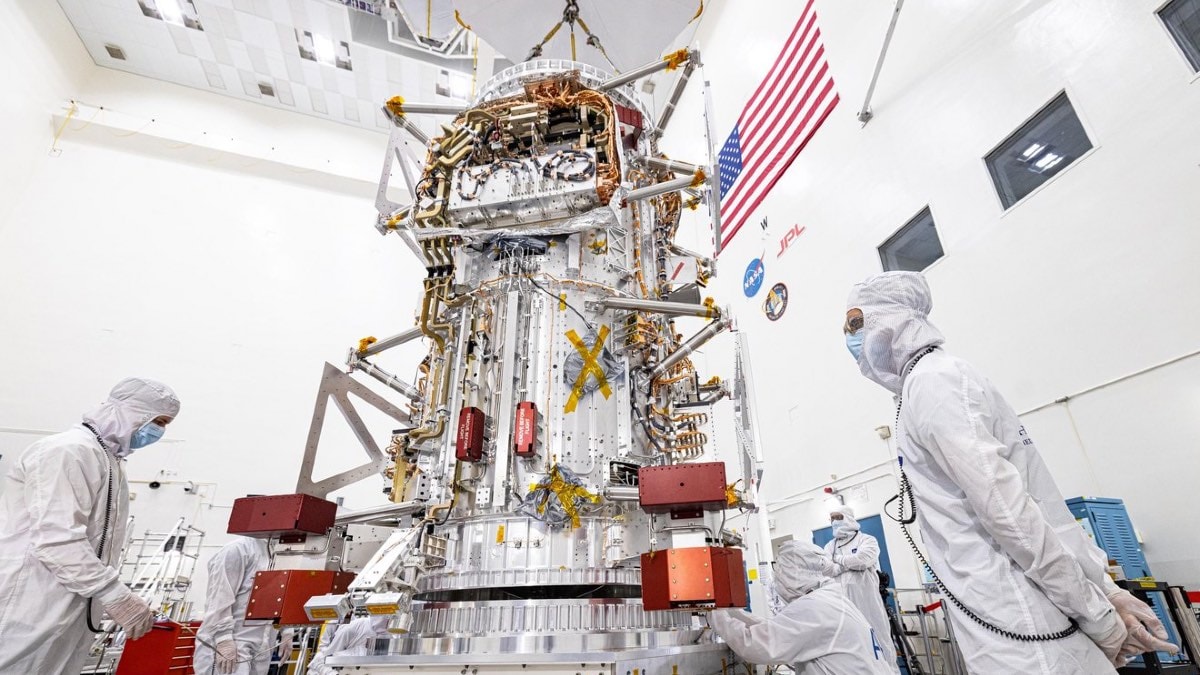 NASA is a step ahead to explore Jupiter’s icy moon Europa. Scientists are certain that the icy moon has a vast ocean under the frozen outer shell. To explore the possibilities on this moon, NASA is launching the Europa Clipper Mission. Recently, the team delivered a major component of this mission. The main body of Europa Clipper is now ready. The mission will be equipped with science instruments needed to study Europa to search for life and life-supporting conditions. It is expected to launch in October 2024 and explore the giant planet over the span of several years.

The main body of NASA‘s Europa Clipper spacecraft has just been made and delivered to the Jet Propulsion Laboratory (JPL) in Southern California. It is at this centre where a team of engineers and technicians will finish the assembling of the rest of the mission over the next two years. The assembling will be done by hand and then tested to see whether or not the mission can withstand the journey to Jupiter‘s Europa.

The Europa Clipper‘s body is 10 feet (3 meters) tall and 5 feet (1.5 meters) wide. It is an aluminium cylinder that includes electronics, radios, thermal loop tubing, cabling, and the propulsion system. It will be as large as an SUV, consisting of solar arrays and other deployable equipment. When the solar arrays are extended, they can expand to the size of a basketball court. The spacecraft will be incorporated with nine science instruments. These will gather data on Europa’s atmosphere, surface and interior. These pieces of information will be used by scientists to gauge the depth and salinity of the ocean and the thickness of the ice crust.

Once the mission reaches Jupiter, it will orbit the planet. It will soar past Europa almost 45 times and scan the moon. After scanning the icy moon, it will report the data back to Earth.

Jordan Evans, the mission’s project manager at JPL, said, “It’s an exciting time for the whole project team and a huge milestone. This delivery brings us one step closer to launch and the Europa Clipper science investigation.”

‘We don’t have to justify it’: Lily Allen speaks out about her abortion
Toyota just started its BEV program, but it wasted all its tax credits on hybrids
Europe will be ‘much less safe’ if NATO does not stop war in Ukraine, foreign secretary warns
As Klarna and Affirm falter, a new breed of ‘buy now, pay later’ startups are stealing the spotlight
Russia in first foreign debt default in over a century, bondholders claim