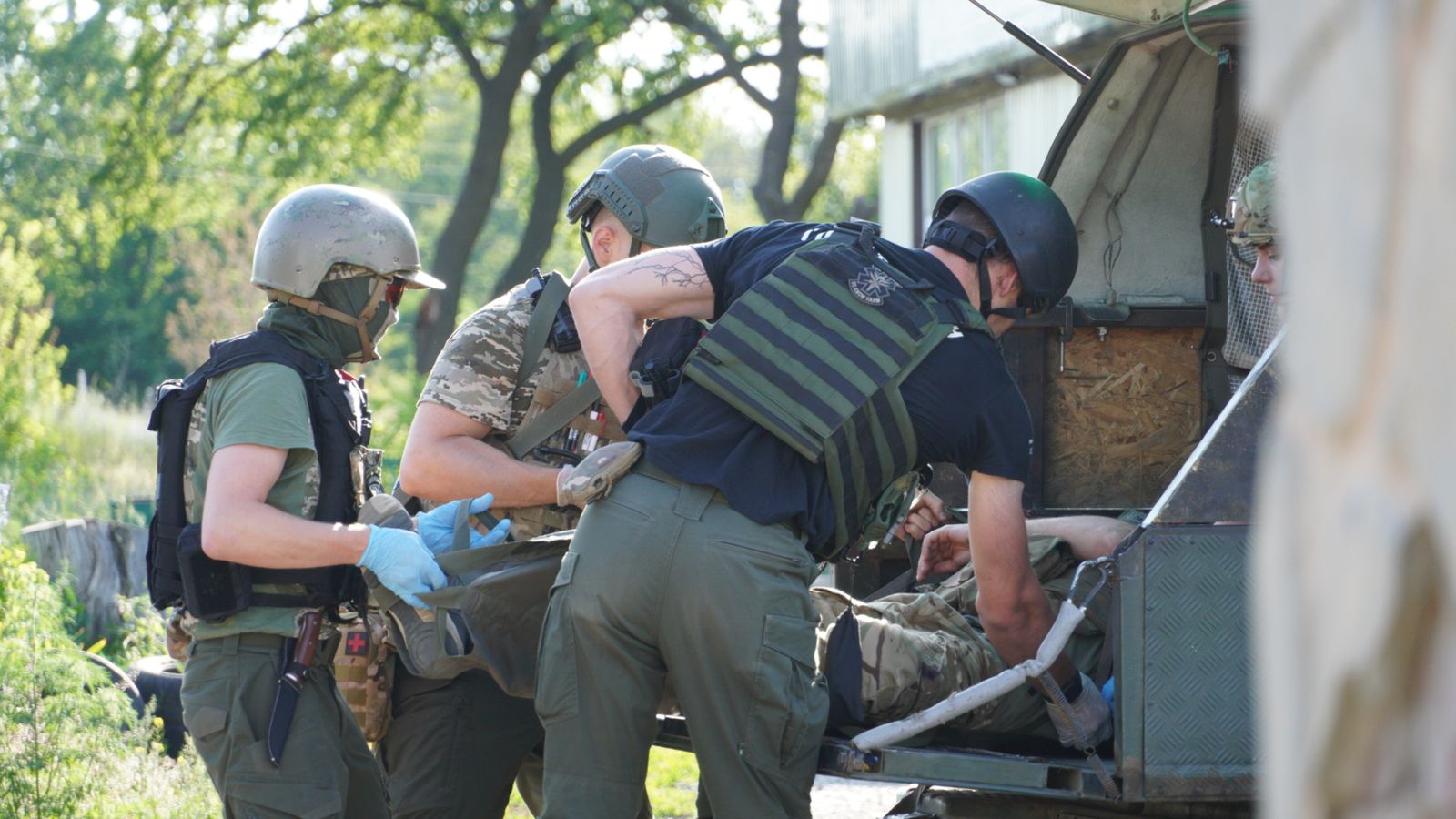 A commander of an elite unit of Ukrainian marines has told Sky News the majority of his best trained troops have been injured or killed.

Speaking near the frontline, south of the city of Severodonetsk, company commander Oleksandr said a core of experienced soldiers who had been fighting together since 2018 have been lost.

“My unit was 100% made up of professional soldiers who have a lot of experience. Now, 80% are incapacitated from serious injuries or death,” he says.

In comments which will alarm those backing Ukraine in its four-month long war with Russia, he says he does not know how long his unit can sustain such losses.

“I don’t even know how to answer this question,” Oleksandr says.

Citing the number of people who have lost their lives in the defence of Severodonetsk, the governor of Luhansk, Sergey Haidai, says Ukrainians would begin to withdraw from the devastated city amid continuous Russian air and ground assaults.

Commander Oleksandr says the loss of battle-hardened troops has taken an emotional toll on his unit where members viewed each other as “one big family”.

He now shoulders the responsibility of readying new recruits for battle.

“During active combat we have a lot of wounded and dead so new people replace them and new people are less prepared.

“We have to train constantly for my unit to be well prepared.”

Commander Oleksandr claims Russian combat losses are even higher, taking Sky News to the site of major battle near the town of Avdiivka to make his point.

Next to the burnt-out carcasses of one armoured personnel carrier, he pointed to the shallow graves of two Russian service personnel.

Russia has ‘no interest’ in removing corpses

When asked how many bodies were still lying in these fields, the commander says it is difficult to estimate.

“In this part, around 40 people, approximately… and on that side, where our artillery was firing, around 150 to 200 people.”

He says these corpses remain because the Russians show no interest in removing them.

“Some of them are buried because their commanders didn’t want to take them,” he adds.

“They didn’t want to collect them so we’ve had to deal with it ourselves.”

Commander Oleksandr’s views on Russian casualties are supported by Western officials who question how long the Russians can continue their offensive amidst high losses and modest battlefield gains.

Quoting casualty figures published last week by the Donetsk People’s Republic, a self-declared autonomous region in Ukraine backed by Russia, the UK’s Ministry of Defence (MoD) estimates that the territory has lost 55% of its total force to death or injury.

The number of deaths in the Russian military is a highly sensitive secret, although it admitted to the deaths of 1,351 in March.

An analysis by the MoD in April put the Russian death toll at around 15,000.

NATO officials estimate that up to 40,000 Russian troops have been killed, injured, captured or gone missing in the first month of the war.

Heavy losses have triggered a “virtual mobilisation” in Russia itself as recruitment offices use a wide variety of techniques to find new soldiers.

In the war-ravaged farmland south of Severodonetsk, Commander Oleksandr thinks the price paid by Russia in terms of personnel and equipment explains why their generals have changed their tactics and focused their operations.

“They have concentrated all forces only in a small number of places now; Avdiivka, Severodonetsk, Kherson Region,” he says.

“In general, we shouldn’t give them the opportunity to hold territory in valuable positions. We need to hit them in the places where they don’t have so many forces.”

‘I just feel I need to sleep for a few weeks, sleep watching Netflix’

A volunteer combat medic since 2015, Iryna Tsybuh says she has never been more tired than she is now.

Iryna is the leader of the medical crew of Ukraine’s 5th Hospitalier Brigade.

From their base near the Donbas frontline she prefers to speak out of earshot of the other medics.

“I am really exhausted and I just feel I need to sleep for a few weeks, sleep watching Netflix, eating fast food, hug my mum,” she says.

She and her colleagues collect wounded soldiers from frontline positions and provide lifesaving first aid.

It’s gruelling work. In the previous few days she said they’ve rescued 22 men – two had died. Some of her crew are clearly very young. The youngest is just 22 years old.

These combat medics treat Ukraine’s elite forces, “guys who know how to do this war, how to win”.

The numbers of dead and injured worry her. Iryna says there are plenty of Ukrainians willing to take their place but they lack the skills.

“They are not professional,” she says. “They don’t know what to do and they are really very scared.”

Before the war Iryna worked as a media trainer doing occasional rotations on the frontline.

Since February 24, she’s dedicated her life to care for wounded soldiers.

“I hate war,” she says. “I would never be here… Russia started this war, so what do we do, this is part of our country that we have to fight for. I don’t see another way.”

Standing on the steps of simple wooden farmhouse near the frontline, Commander Oleksandr lists the number of soldiers he has lost over the past couple of months.

The most difficult period, he says, came in the early Spring.

Positioned near the town of Avdiivka, his unit was “badly overstretched” as the Russians repeatedly tried to break through his lines.

He says: “At the beginning of this invasion we lost the majority of our people and machinery because our battalion was over-stretched across several villages… the distances were so long it was difficult to hold them.”

This onslaught would also bring dramatic changes to Oleksandr’s own job.

A deputy commander at the time, he was thrust into the leadership role but when his superior was blown up by a mine.

His men were considered to be members of the elite – highly trained professionals who had been fighting as a unit since 2018.

He says: “During the years of serving together we became best friends… it’s very hard to lose people because we were one big family.”

Everything is different now and the realities of this war means that Oleksandr never has time to rest.

If they are not fighting on the front, he says he has to train his soldiers as many are new and inexperienced.

“We won’t just sit on our butts because [the Russians] will increase their offensive.”

Girl who chewed through restraints to escape was ‘held captive with dismembered remains of mother and brother’
Anne Heche ‘stable’ and ‘expected to pull through’ after car crash
What you need to know ahead of the restaged 2022 World Junior Championships
Awesomely Weird Alibaba Electric Vehicle of the Week: An ambiguous backwards car
Nearly 50,000 sign petition backing Gordon Brown’s call for emergency budget to tackle cost of living