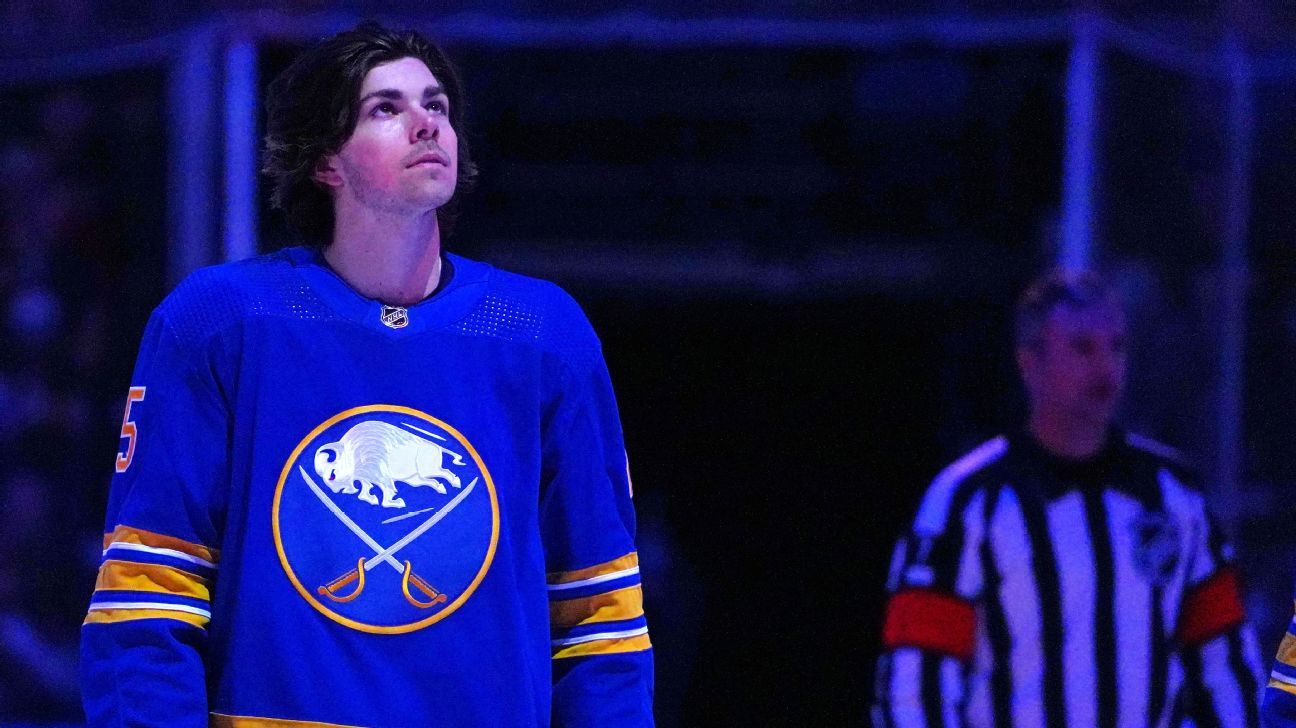 Buffalo Sabres defenseman Owen Power succeeds or fails based on his ability to make split-second decisions. Like choosing a bag of popcorn over a speeding home run ball at a recent Toronto Blue Jays home game.

“It was kind of embarrassing I didn’t get it,” Power said.

Power and his girlfriend Victoria were seated behind left field when Jays catcher Danny Jansen smacked a pitch over the wall and into the stands.

“I went and got some popcorn for us,” Power said. “On the way down, I was walking into my seats and I heard the bat. I was thinking there was no chance that it comes to me. But then all of a sudden everyone in my section was standing with their arms up. I looked up and saw a ball coming right at me. I had the popcorn in one hand and … well, I moreso tried to save myself than catch it because it was coming in pretty fast.”

Another fan lunged for the ball before the 6-foot-6 NHL rookie was prepared to grab it. Fans watching the game noticed that Power was in the vicinity of the ball but didn’t come up with it; Canadian sports networks would notice the same.

“I was lucky it wasn’t shown too much,” Power said.

Alas, the cameras caught that gaffe but not the eventual triumph. In early September, the Power couple were back in the stands in Toronto. A ball sailed into the crowd, once again headed to their section. This time, they left with a souvenir — Victoria caught it.

There will be plenty of cameras focused on Owen Power this season as the No. 1 overall pick in the 2021 draft embarks on his first full campaign with the Sabres. His success will be chronicled for what many expect will be a Calder Trophy candidacy, but he is still a rookie defenseman — and teammate Kyle Okposo said because of that, Power’s failures might be intensified.

“Your mistakes are magnified. Because if you make mistakes as a defenseman, you’re giving up a chance,” said Okposo, who is entering his 16th NHL season. “A lot of times in this league, they’re going to make you pay for it. As a forward, if you make a mistake, a lot of times they’re up the ice where you have other people back and those mistakes can get covered up. Privately, you hear about those on video when you’re a younger forward. It’s not always as public as a defenseman. You have to learn how to be positionally sound because everybody’s so smart in the NHL.”

It’s something Power has already noticed, despite having played only eight games for the Sabres last season after leaving the University of Michigan.

“You’re going from playing against guys that aren’t as skilled or as strong or as smart as they are [in the NHL]. You’ve got to play against the best players in the world,” he said.

Beginning this season, he will.

POWER WAS BORN in 2002 in Mississauga, Ontario. To carbon date this: The Sabres’ leading defenseman in average ice time that season was Alexei Zhitnik, and they were wearing the red and black “goat’s head” jersey that’s returning this season as an alternate sweater.

He grew up competing in a variety of sports, including box lacrosse, where he won three national titles. But hockey won out for Power. He played Triple-A hockey in Canada before making the leap to the USHL’s Chicago Steel in 2018, followed by two seasons with the University of Michigan. Those Wolverines teams were notable for their depth of NHL prospect talent, including Brendan Brisson (Vegas Golden Knights), Kent Johnson (Columbus Blue Jackets) and Matty Beniers, who was selected second overall in 2021 by the Seattle Kraken.

Power could have made the leap to the NHL after his first season at Michigan. The draw of playing with that group and chasing a national title proved too strong for him. Power said he has no regrets for staying at Michigan, even though the Wolverines lost in the semifinals of the Frozen Four.

“It helped me a lot to develop. Not only as a player, but as a person. It was the right decision and going to be really beneficial,” he said.

Also beneficial: Getting a chance to represent Canada at the 2022 Winter Olympics in Beijing, after the NHL refused to allow its players to populate those rosters due to the COVID-19 pandemic’s impact on its regular-season schedule. Some of his Michigan teammates joined him there.

“That was an unreal experience,” said Beniers, who played for Team USA in Beijing. “Being able to do that is a once-in-a-lifetime opportunity. Now, making that next step all together, is pretty special.”

Power said the Olympics helped in making that next step an easier one.

“Playing against pros and being in that atmosphere where there is a lot on the line,” he said. “It helped us mature a little. For me, it’s helped me a lot.”

Power jumped to the NHL after that, scoring two goals with an assist in eight games as a Sabre. That projects to over 20 goals in a full season, a total that only three rookie defensemen — Brian Leetch (25), Barry Beck (22) and Dion Phaneuf (20) — have hit in NHL history.

“I don’t know about that,” Power said. “Hopefully I’ll be able to get that many, but who knows?”

He was happy with his NHL debut, which gave Buffalo fans a glimpse at the future and gave a taste of professional life to Power.

“I think everyone did a really good job of making me feel comfortable. Everyone there was really welcoming,” Power said. “But the biggest guy in that for me was Okposo. He really helped me. He was always there when I had questions about the league. He’s someone everyone kind of leans on.”

How is he feeling about the Sabres team that Owen Power has joined?

“Feeling good about it. And it’s taken a long time to get here,” Okposo said.

Okposo had just finished a skate in Buffalo and was speaking from its locker room. As he looked around the stalls, he saw only one name that had been with the team as long as he’s been there: forward Zemgus Girgensons.

“I remember my first year here and how much hope and optimism I had going into the season. And it’s very satisfying for me to see the potential of where we’re going now,” he said. “That’s not to say that we’re there yet, because it’s a long way to go. But the building blocks are there.”

Power is one of those building blocks. Like with other young players, Okposo felt a responsibility to share what he’s learned.

“He is a 19-year-old young man and first overall pick. There’s different pressures that go along with that, especially as a defenseman in the NHL,” Okposo said. “I just wanted to make sure that he feels as comfortable as possible going into the season. I think that when you’re in a good place mentally off the ice, then you’re going to be able to perform your best on the ice.”

Off the ice, Power thinks a lot about being on the ice. He’s become infamous among his teammates for watching copious amounts of video on other defensemen. “When you watch some of the top guys, you see things they do and then put it in [your game]. It’s a copycat league. I think it’s good to learn and watch,” he said.

His focus lately has been on three NHL defensemen in particular, all of them Norris Trophy winners: Victor Hedman of the Tampa Bay Lightning, Roman Josi of the Nashville Predators and Adam Fox of the New York Rangers. But there’s another defenseman to whom Okposo likens him, and it’s not one usually associated with a 6-foot-6 frame.

“He’s got a lot of a young Erik Karlsson in him,” Okposo said. “Not his total game, but just how smooth he is. When Erik would do things, it was so fluid. I think Owen has a similar aspect in how he plays.”

Power’s skating has been praised throughout his journey to the NHL, many times in contrast to what’s expected from a defenseman his size. But there’s another aspect of Power’s game that Okposo loves: his decision-making.

“He’s not afraid to make the simple pass,” he said. “When you’re a young, skilled defenseman and a No. 1 overall pick, you have all these expectations on you and there’s times where you try and make a difficult play.”

Okposo’s college roommate was another first overall pick defenseman: Erik Johnson, who just won the Stanley Cup with the Colorado Avalanche. Okposo remembered giving Johnson a hard time when he’d forego the simple play in favor of “always trying to throw some sauce where it didn’t need to be” on his passes.

“That’s something that Owen, he doesn’t do,” the veteran said. “If the hard play is there and that’s his only play, then he is going to make it. But if he’s got a safe option, he’s going to move it there. I think that’s something that is unique in his game. It kind of reminds me of somebody like Miro Heiskanen where he’ll make the simple play and then he’ll just wow you in different areas.”

HEISKANEN IS PART of a wave of young NHL defenseman with whom Power is surfing. Avalanche defenseman Cale Makar, who won NHL Rookie of the Year in 2019-20, and Moritz Seider of the Detroit Red Wings, who won it this past season, are also part of that wave.

He chuckled. “I really don’t think too much about it. I just try to show up at the rink every day and try to get better. See what happens from there.”

The expectations are there for Power, both as a rookie and as a foundational player for the Sabres. It’s not hard to see the point of demarcation for the franchise: Owen Power arrives just as Jack Eichel leaves, having been traded to the Golden Knights last season. One era yielding to the next in Buffalo.

But Okposo doesn’t see the post-Eichel Sabres as belonging to one player, even if he was a first overall pick. He rattles off names like Rasmus Dahlin, Alex Tuch, Tage Thompson, Peyton Krebs and Dylan Cozens, who will join Power on this roster.

“I don’t know who’s going to mark the new era,” Okposo said. “That’s the thing about our team. That’s where the internal competition is going to come in, and we’re all going to push each other in a positive way.”

Power said he’s ready to join that push. “It’s an unbelievable group of guys, and a real young group,” he said. “I’m excited to go in. Just happy to be a part of it.”

It’s a fast-arriving opportunity for Power that he doesn’t intend to miss.

Even if he’s carrying a bag of popcorn.

Pulisic, Fred, Hazard: Players who are better for their country than their club
XPeng G9 trims updated with new options and prices to meet high customer demand (and alleviate confusion) before launch
US interest rates hiked again to tackle soaring inflation
Bank of England ‘will not hesitate to change interest rates as necessary’ after pound’s fall
Agony aunt Deidre Sanders diagnosed with breast cancer after screening ‘error’