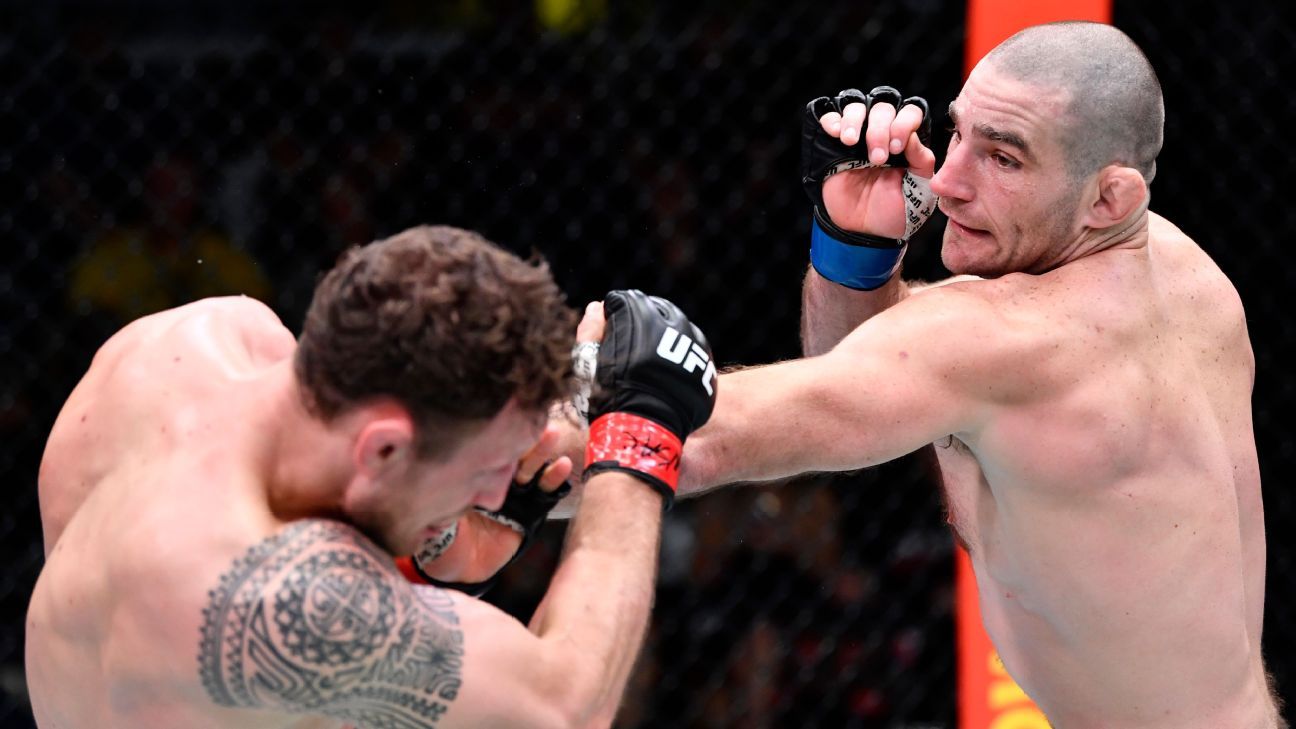 The UFC will end its year with a main event highlighting one of the promotion’s most interesting divisions.

Sean Strickland will take on Jared Cannonier in the main event of UFC Fight Night on Saturday in a critical middleweight battle. Both men are coming off losses against elite fighters, and the winner will make himself relevant again in the 185-pound pecking order.

Strickland was on a six-fight winning streak and looked prime for a title shot before running into Alex Pereira — and his devastating left hook — in a knockout loss at UFC 276 back in July. Cannonier’s lone loss in two years came against then-champion Israel Adesanya in the main event of that very same card. Both fighters are ranked in the top 10 of ESPN’s middleweight rankings.

Last month, Pereira stopped Adesanya via fifth-round TKO to win the UFC middleweight title, a fight that was very relative to the interests of Strickland and Cannonier. With Pereira champ, that rekindles the chances of Cannonier to get back to a title fight quickly. But for him and Strickland, a win this weekend is necessary to keep pace.

The co-main event features two of the top lightweight blue-chippers in the UFC, Arman Tsarukyan and Damir Ismagulov. Plus, Cory McKenna, who was No. 9 on ESPN’s top 25 under 25 MMA list, will take on Cheyenne Vlismas, all-action lightweights Bobby Green and Drew Dober will clash, and Julian Erosa will look to extend his featherweight winning streak against veteran Alex Caceres.

Here are some of the biggest questions (and their answers) going into this final UFC fight card of the year:

Fact or fiction: The winner of Cannonier-Strickland will get a title shot next

Okamoto: Fiction. Long fiction. Put this one in the ‘fantasy’ section at your local library. There are multiple options for Pereira’s first title defense that are well ahead of the winner of this one. But don’t take this response wrong: this is a big-time fight at middleweight.

Men’s middleweight contenders Jared Cannonier and Sean Strickland go head-to-head on Saturday to determine who will move closer to a title shot.

Cannonier probably needs it more. He’s older, and he’s already had his chance in a UFC title fight, and the effort he gave — if we’re being candid — wasn’t the kind that will inspire another shot soon. Strickland isn’t as much against the wall, but he’s already got a loss to the current champ. So, it’s big stakes for both.

Raimondi: Fiction. Adesanya will likely get a deserved immediate rematch for the title against new champion Pereira. Robert Whittaker is also higher on the middleweight contender depth chart.

Wagenheim: Fiction. Unless “The Last Stylebender” defers, having lost to new champion Pereira three times now (including kickboxing), the Cannonier-Strickland winner will be stuck behind him in the queue. Maybe this weekend’s winner can wait his turn, but that’s a treacherous way to navigate the twisty road of UFC matchmaking.

Raimondi: The co-main event, without a doubt. Tsarukyan and Ismagulov are two of the top up-and-coming lightweights in the world. The grappling battle alone between the two of them should be stellar. Remember how well Tsarukyan fared against Islam Makhachev and Mateusz Gamrot? The winner of this fight could be a future title contender, they are both that good. So good that you almost don’t want to see them fight each other this early in their UFC runs. Not that anyone should be complaining.

Wagenheim: I’ll go with the co-main as well, because it features the only other fighter (outside the headline bout) in ESPN’s divisional rankings. Tsarukyan (18-3), No. 10 at lightweight, is coming off a rare loss as he takes on Ismagulov (24-1), winner of 19 in a row, the last five in the UFC. Ismagulov is one of 11 fighters on this card with no more than two losses, and there are four fights in which two such fighters face off. This card may not be packed with big names, but there are some excellent resumes.

Okamoto: No brainer, it’s Tsarukyan vs. Ismagulov. Two names that aren’t household yet, but anyone following the sport knows they are two wild cards in the lightweight division. We might not be talking about these two regularly now, but we will be in years to come. I’m more interested in this fight than I am in the main event.

Which prospect on the card has the best outlook for 2023?

Wagenheim: Said Nurmagomedov has the surname to get noticed and the skills to take advantage of the attention. The 30-year-old from Dagestan, who faces Saidyokub Kakhramono in a bantamweight prelim, is not related to former champ Khabib or his UFC cousins Umar and Abubakar or Bellator’s Usman. Still, the name association alone can set Said apart from the crowd. Nurmagomedov (16-2) has won 10 of his last 11 fights, shifting his trajectory upward.

Monday through Friday, host Pablo Torre brings you an inside look at the most interesting stories at ESPN, as told by the top reporters and insiders on the planet. Listen

Raimondi: Tsarukyan. His only UFC losses came against the current champ, Makhachev, and a top contender in Mateusz Gamrot. In the latter fight, many thought Tsarukyan could have won. If the Georgian-born fighter of Armenian descent can get by a very, very tough foe in Ismagulov on Saturday, there are only big fights for him upcoming in 2023. He probably wouldn’t earn a title shot next year, but he could put himself close to that No. 1 contender spot with this one and a couple more.

Okamoto: I’m with Raimondi on Tsarukyan, because I believe in his overall skill set. And he’s only 26. Beyond that, I’ll say Manel Kape. Kape came into the UFC’s flyweight division with some behind-the-scenes hype, but it’s taken him a bit to find his groove. Now that it seems he has, he’s a threat at 125. If he has a breakout 2023 campaign, I won’t be surprised.

Is this the proper return fight for Bobby Green?

Okamoto: It depends on what we mean by ‘the right return fight.’ Is it a tough fight? Yeah, it is. Green is an underdog, although not a massive one. Dober has the kind of style, however, that can overwhelm opponents. He’s good at applying pressure and he’s a plus wrestler. It won’t be a massive shock if his offensive wrestling proves too much for Green. That said, Green has risen to challenges before. Some of his most memorable performances have been as an underdog, especially earlier in his career. Is this the proper fight for him in terms of making sure he looks good? No. Is it an opportunity to make a statement against a proven guy immediately? Absolutely.

Raimondi: There are worse matchups for Green, who has become a big fan favorite since going 3-1 during a very active pandemic year in 2020. If there’s one thing about Dober, he brings the fight. He’s a candidate for a Fight of the Night bonus every time he steps into the Octagon. Same with Green. And he excels when he has an opponent willing to engage and push the pace. Look at how well Green performed against Rafael Fiziev, an elite striker. Dober vs. Green will be a fun one, no doubt.

Wagenheim: I’m sure Green would have preferred to be booked against a ranked lightweight, which would have given him a chance to move quickly up the pecking order. But coming back from a PED suspension, he had no clout to be picky, even though he popped for a substance found in over-the-counter supplements. If anything, Green should welcome this fight against Dober, a tough-as-nails veteran whom fans will recognize. Green will have as much of a spotlight on him as he has the right to expect.

What fight did you want to see in 2022 that never materialized?

Wagenheim: Francis Ngannou vs. Jon Jones. Isn’t that the fight everyone most wanted to see in 2022 but didn’t happen? I’ll expand that big-boy want by saying that, with Ngannou’s status with the UFC up in the air this year, I would have been thrilled to watch Jones make his heavyweight debut against anyone in the top five. Jones vs. Stipe Miocic would have been — and still could be — a fun fight and a solid test for the bulked-up “Bones.”

Raimondi: Ngannou against Jones for the UFC heavyweight title. It seemed like it was destined to happen finally this year, but Ngannou needed knee surgery after his title defense against Ciryl Gane back at UFC 270 in January, and Jones didn’t end up fighting for the whole 12 months. Jones was nearing a return in December, but Ngannou wasn’t ready due to his recovery and a deal for Jones against Miocic never came to fruition. Let’s hope 2023 is the year we see Ngannou, the most dangerous puncher in UFC history, against Jones, the most successful athlete ever in MMA.

Okamoto: Anything involving Conor McGregor, for one. I miss the guy, alright? I do. The sport is fine without McGregor, but it’s also a lot of fun with him — and it never felt like we were even close to seeing a McGregor fight this year. I also wanted to see Kamaru Usman vs. Khamzat Chimaev, and that didn’t happen. Quite a few of the other fights I had on my list of ones to see in 2022 did happen, so it was a good year for marquee fights coming together. But McGregor’s 12-month absence this year was noticeable, and I wish we would have seen Chimaev in a more marquee fight, especially after the Fight of the Year candidate he had early with Gilbert Burns.

Chevron announces $75 billion stock buyback, dividend boost
British teenage extremist whose videos were linked to two mass murders in US jailed
The deadly assault draws painful parallels for Americans who are no strangers to videos of police violence
Kanye West a ‘danger to my children’, David Baddiel says
The 13 U.S. debutants you need to know in January friendlies